We usually wake up to their existence when they don't turn up for work. And the first response is annoyance, because of the inconvenience caused to us. Films like Lakshmi and Me open our eyes to the plight of people who hold up our homes, writes Kalpana Sharma.
20 January 2008 -

They flit in and out of our homes like ghosts in the night. They sweep and swab, wash and cook, look after our children, care for the elderly. Yet we know little about them. Most of us just about know their first names. We don't know where they're from, where they live, whether they are married, how many children they have, how many other homes they work in, what they earn  how they survive. They are virtually invisible.

We usually wake up to their existence when they don't turn up for work. And the first response is annoyance, because of the inconvenience caused to us. Many professional women don the title of being superwomen because they manage jobs and homes  work life balance. But in fact the real superwomen are these silent workers, without whom few professional women in India would be able to function. Yet, while those in formal employment get sick leave, casual leave, privileged leave and weekends, our domestic help is not entitled to any of this. If she rests too long, shes lazy. If she doesn't turn up for work, she's a shirker. It would appear that these women don't have the right to relax, to fall sick, to have some fun. And of course, no one acknowledges that when they're done with our homes, they still have their own homes where they have to do the very same jobs, sweep and swab, wash clothes, cook and take care of children and elderly. 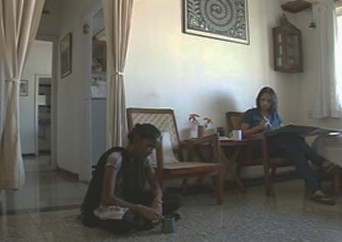 A still from the film. (Picture from www.lakshmiandme.com)

Nishtha Jain, a Mumbai-based documentary filmmaker has done what all of us need to do. She has not just acknowledged that this silent worker in her home has a name, but she's followed her life so that we see the person behind the name  a person just like any of us. And instead of viewing the woman from a distance, the filmmaker has bravely placed herself in the frame, honestly dissecting her own relationship as an employer. Lakshmi and Me is a remarkably honest documentary about 21-year-old Lakshmi and the filmmaker, Nishtha.

Lakshmi is typical of the domestics in Mumbai who work in several houses. They arrive at fixed time, rapidly complete the assigned tasks and move on to the next house. The only conversation with the employer is about the work  rarely anything personal.

But Lakshmi found that one of her employers was actually interested in her as a person, wanted to know her views, her dreams and ambitions. She wanted to understand why Lakshmi felt it was a curse to be born a woman. She wanted to know about romance in her life, about her family, her home, the traditions she followed. And to her credit, Lakshmi allowed the filmmaker into her life.

The film follows Lakshmi's life, her daily routine of working in different homes, takes us to her own home, introduces us to her family and her perennially drunk father. We watch her fall in love and ultimately marry a young man from a lower caste. Her family disowns her. We feel Lakshmi's sorrow when this happens as well as her happiness with the man she loves. And then illness strikes. We see her getting weaker and thinner. And yet she continues working. We witness the first months of her pregnancy. And yet she works. And we watch her struggle with illness and pregnancy in hospital.

Ask for more money, and you are guaranteed to lose your job. And there are plenty of others waiting to take your place.

•  At home, at work
•  Organising inside the home
•  In the name of servitude

What is most interesting about this film is the relationship between the two women, Lakshmi and Nishtha. The latter tries hard to overcome the class divide and the employer-employee relationship. She invites Lakshmi to join the crew for lunch and sit at the table. Lakshmi is embarrassed and amused. Later she tells Nishtha that she laughed because she thought it so funny that a 'black' woman like her should be sitting with 'white' people! And we claim colour is not an issue.

So, can gestures like asking our domestic help to sit at the table with us really bridge the chasm that exists between classes? Such gestures can have meaning only if they are backed with a genuine interest and concern in the person and recognition that they are human and have the same rights and needs as we do. And even then, we cannot be sure that decency and magnanimity on our part as employers will necessarily result in a comfort level where our domestic help feels at ease sitting at the same table as us. For, the divisions in our society, the place that each presumes they have in it, are so deep that it will take much more than such gestures to change things. But they could be a beginning and they could set a trend where we recognise and acknowledge those who provide us with such vital support.

Another important aspect of domestic work that the film brings out is the crisis that befalls these women when they fall ill. Most of them continue to work until it is virtually impossible for them to do so. By then, their sickness has advanced to a point where they need urgent care. Yet the reason they don't take even a day off to deal with health problems is because they fear that someone else will take their place. The reason they don't demand a higher wage, or some additional amount for medical contingencies, is the same. Ask for more money, and you are guaranteed to lose your job. And there are plenty of others waiting to take your place.

Films like Lakshmi and Me ought to be shown on prime time television, in housing societies in a city like Mumbai, in schools and colleges (www.lakshmiandme.com / www.raintreeefilms.net). As a society, we are becoming increasingly blind and indifferent to the existence of people who hold up our homes, our lives, our cities. Such films should help open our eyes and our minds.

Kalpana Sharma has been Chief of the Mumbai Bureau and Deputy Editor with The Hindu. Her opinions, which appear in a regular column with The Hindu, are concurrently published on India Together with permission. 'Lakshmi and Me' is written and directed by Nistha Jain, and produced by Raintree Films.