They hit back, "and it felt good"

A public hearing on NREGA in a remote village in Bihar created a confrontation between a leader accused of corruption and the workers who exposed him. Rajesh Veeraraghavan was there and he recorded this story.
15 November 2010 -

I was sitting in a hot, open field in a remote countryside in Bihar. The location: Saurgaon village in the Kursakata Block of Araria district. Hundreds of workers were lined up in front, waiting patiently for their turn. The occasion was a public hearing, organized by Jan Jagaran Shakti Sanghatan(JJSS), a new local social movement, which had recently formed to support the workers struggle for employment. I had signed up to volunteer as administrative help, and I was filling in applications on behalf of workers who wanted to demand work from the government under the National Rural Employment Guarantee Act (NREGA). 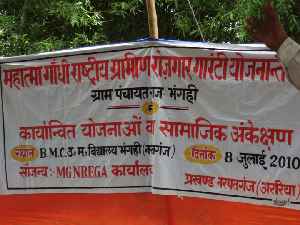 A tent had been set up for the occasion. It was already full with people from the local Panchayat, but more villagers continued to trickle in. The hearing began with the organizers singing some revolutionary workers songs. Immediately after, 34-year-old Ashish Ranjan, one of the organisers of the event, took to the podium and demanded, "Have you ever seen a muster roll?" A resounding "NO!" shook the tent. Have you had one hundred days of employment? Again, NO! Ranjan proceeded to explain that the purpose of the meeting was to inform people about their rights and to present the results from a recent audit.

A week prior, I was working with some volunteers, who were preparing for a village survey. We were looking at the government records of a village that we are going to audit. One volunteer noticed, "The same road is listed on two different yojanas. Another retorted, I see a similar case in my register as well. The following day, we visited some villages to track down the road, where we heard that the work was not even completed the first time around, leave alone having multiple projects. So, it seem to be a clear case of one work having different names to trick the people.

To one worker, Kanchi (name changed), 35, I said, "It looks like youve worked 40 days this past year, received Rs. 4000 for it in your account, and then subsequently withdrew it." Kanchi gave me a blank look, which quickly turned to rage. All of the other passbooks indicated similar activity, and the villagers became increasingly agitated. Another volunteer asked, "Are you saying that you haven't received this money? They replied, "No, not at all."

The meeting re-started and the atmosphere remained tense, the scuffle had ironically brought the agenda to sharp focus.

•  They lock on to NREGA
•  Farce at Latehar

This was exactly the kind of illegitimate activity that JJSS was interested in unearthing, so we asked the villagers to come to the following weeks public hearing. Most hesitated, but then agreed to come. When we asked people to sign a written testimonial, a few refused, saying, "I cant sign this paper. I need to live here." They feared retaliation from government officials.

Later, the fear spread to the other villagers, and some even demanded that we return the written testimonial. Later in the evening, we encountered some of the villagers. They were having a drink and discussing the days events. Kanchi was among them, and we all began to discuss the hearing. Kanchi voiced everyones worries: "These b*t*ds will kill us. Im not scared, but some people are." We assured them that JJSS would remain in the area and that we would provide support.

One week later at the public hearing, Ranjan laid down the protocol of the event: Lift your hands to speak, and come to the microphone in the front to speak." He noted that the proceedings would be video recorded.

The gathering at the public hearing at Bhangahi. Pic: JJSS.

Manoj Singh, 50, the panchayat president, got up first to speak. He said, "Everything is going well in this village. All the work has been done and everybody was paid." Then, results from the audit were read out, making clear gross disparities in claims between the government records and from the survey.

Kanchi raised his hand to speak: My name is Kanchi and I am from Boratola (name changed).

Ranjan asked, "The government records say that you worked on a project to move sand from Ram's house to Krishna's. Did you do so, and how much were you paid?

Yes, sir, I did work on that project.

The government records show, Ranjan continued, that you worked for 40 days and were paid Rs.4000. Is that correct?

Someone immediately shouted, "He is lying!"

Kanchi was livid. He pointed towards Singh, the panchayat leader and said, "Hes a crook. He and his cronies must have taken the rest of my money, whole 3000 rupees!" Mukhya rose up, rushed over to grab the microphone, and then hit Kanchi on the head with the microphone stand. The entire proceedings occurred in front of 500 people and was caught on video.

This caused a great uproar, very soon the workers got up and started running towards the Mukhya shouting "hit him, hit hi"m. Suddenly sticks appeared and they were charging up to the Mukhya, who was immediately whisked away to safety. Everybody was running and shouting and there was a minor scuffle between Mukhyas men and some of the workers. The activists were running clutching the documents they had tightly so that they werent taken away in the commotion.

Soon, the activists brought the meeting to order. Singh returned, and everybody sat down. The meeting re-started and the atmosphere remained tense, the scuffle had ironically brought the agenda to sharp focus. The testimonials continued to pile up, but the workers were careful not to name-call and stuck to facts. People were clapping and cheering and backing up every testimonial from whoever had the courage to come and speak up. The clerks contested the evidence and gave counter testimonials. Some workers also stepped up to support this view and attested that they have been paid fully for their work and there are no problems in the village. These testimonies were often booed.

Singh finally got up and said, I have listened to the workers complaints, and I now know that there are problems but I wish that somebody had told me earlier. He promised with a sly smile that he would take action and ensure that wages are returned to workers and will secure employment for everyone. The meeting ended and the testimonials were submitted to the Mukhya, the media and to the district collectors office.

The next morning I visited the village where Kanchi lived and found him, he said, Mukhya (panchayat leader Manoj Singh) had come by in his car that night and had threatened the people in the village for speaking out. But Kanchi added, looking away, he cant do anything to me. I asked him, what do you think will happen, he said we have been discussing that in the village, it is unclear what will change.

But, he added, in the last 10 years that this Mukhya is in power, I have never seen him s**t in his pants like this. He gleefully added, and it felt good.

Rajesh Veeraraghavan is a doctoral student at the School of Information, University of California at Berkeley. He volunteered at a social audit organized by Jagaran Shakti Sangathan (JJSS), a social movement in Bihar.