Madhubani: The old and the new

The concrete road is a symbol of some development in this northern Bihar town, but it sits oddly with its surrounding landscape. The lack of jobs, the bane of many small towns, has affected Madhubani too, writes Kalpana Sharma.
07 May 2009 -

The road leading from the Madhubani railway station, past the gleaming newly painted post office, the spanking new zilla parishad building, the grounds of the Watson High School to the Collectorate and the district court is made of cement concrete. It dips sharply on either side of its 12 ft width but no one is complaining. "At least you are getting a smooth ride", says the cycle rickshaw driver.

The concrete road, a symbol of some development in this northern Bihar town, sits oddly with the surrounding landscape of open water bodies, horses grazing on grasslands adjacent to another pond where groups of women wash their clothes and cows eating garbage strategically below a hoarding with messages from Bihar Chief Minister Nitish Kumar. Yet, this road is clearly Madhubani's way of announcing that it is, indeed, a town with a population of 66,340 (2001). It also symbolises symbolises the many technological and social changes that are now evident in small towns across India.

The queues here are not for railway tickets but in front of the ATM machine. The State Bank of India's ATM machine outside the railways station hosts the longest queue in town. There are four ATM machines in Madhubani. They run out of cash on most days and work sporadically as electricity plays truant with regularity and the battery backup often runs out. Thus, new technology and old infrastructure conduct a daily battle.

A new hotel under construction is another sign that something is changing. Located on station road, the hotel has all the accoutrements of modernity - a shower, hot water geysers in the bathrooms, air conditioning etc. The crucial component missing is an adequate supply of electricity. So a noisy diesel generator that drowns out all conversation and chokes your sinuses with fumes compensates.

One of the older residents of Madhubani is Prashant Jha, a barrister in the district court. He owns a plot of land located on the main station road. His father had bought this plot in 1934 when he moved from his village. At that time there were no other houses on either side. Today, other buildings surround his plot. Jha's quarter acre plot is typical of others you see in town. There are several structures, including the first house built by his father. The development of the plot has been incremental with no particular plan. Jha substitutes his income as a lawyer by collecting rent from tenants on his property. He says the population of the town consists of people from surrounding villages. Educated people from Madhubani usually move to Patna looking for work. Only those who can get jobs with the government stay on.

The lack of employment avenues, the bane of many small towns, has affected Madhubani too. Although levels of education are high, and the town has several good quality schools and colleges, most people have to move out to find jobs. Even traditional skills, such as weaving, for which Madhubani was once known, cannot ensure a job. 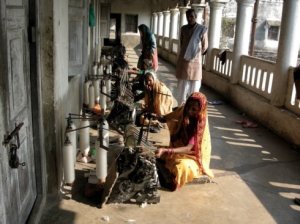 In the heart of the town is the Khadi Gramudyog established in 1919. In its heyday, it employed over 22,000 people including 1100 weavers to produce Khadi cloth and other village industries projects. Today, its 17 acres campus is a collection of old and dilapidated buildings where a handful of ageing men and their families live. Avadh Narain Jha, who is in charge of the Khadi Gramudyog, says that today they are able to hire only 100 weavers, as they don't receive an adequate quantity of cotton that can be spun into yarn and then sent to the weavers. The place still produces between Rs.25-30 lakhs of Khadi towels, dhotis and shawls, but the production is declining each year. "The workers we have end up looking after our property, a total of 65 acres in the entire district, and making sure no one encroaches on it," he says.

Like other small towns its size, Madhubani faces several problems but the one shortage it does not face is water. Located as it is in the flood prone districts of Bihar, there is plenty of underground water. People have hand pumps in their homes or located outside. There are also at least 14,000 ponds in the district, says a local resident.

Electricity, however, is a major problem with power coming for only a few hours every day. Those who can afford it either have diesel generators or a battery back up. There was no evidence of anyone turning to solar power for domestic lighting. There is little or no street lighting in the town. As a result, once it is dark, life virtually comes to a standstill.

Despite the occasional garbage heap, many of the residential areas of Madhubani are surprisingly clean. This is the result of several years of work by several non-governmental organisations like PRIA (Participatory Research in Asia) to establish mohalla samitis who would organise their communities around the issue of solid waste management. In the process, many of the elected representatives in the Nagar Parishad also got involved. Today, in several localities the scheme continues to function, although with varying degrees of success.

Sachinand Thakur is a schoolteacher who led the way in setting up a mohalla samiti in his neighbourhood that consists of lower middle class people. The community raised the funds to get a proper drainage system built. The municipality gave them two wheelbarrows to help gather the garbage from each house. Those wheelbarrows are now rusted wrecks, as they have not been replaced. Yet Thakur and his group of activists are not deterred. Every Sunday, he says, they go personally to different parts of their neighbourhood and make sure it is clean. According to him, the municipal sweepers come infrequently.

In other wards, ward councilors have taken the initiative to ensure that the place is kept clean. One such is Makhani Devi, one of the 11 women in the Nagar Parishad. This mother of six children has a clear sense of what she needs to do for her ward. "When I was small, the place was backward. Now it is much cleaner", she says. "I personally make sure that it is clean. There are three workmen and one thela (cart). Garbage is collected twice in a week. Three wards share these workers. We have two garbage bins. People throw their garbage in these bins and the tractor comes and cleans up", she explains.

However, while Makhani Devi and some of the ward councilors had devised ways of ensuring that the limited work force hired by the Nagar Parishad actually does its job, the councilors as a whole seemed uninformed about their rights and duties beyond solid waste management.

Despite Bihar being a highly politicized state, the elections to urban local bodies are not fought on party symbols. As a result, there are multiple candidates who count on getting the votes of their relatives, their caste members and other supporters. Those who win do so by very narrow margins. Bihar has increased the reservation for women to 50 per cent of the seats after the 2006 elections to urban local bodies and panchayats. Yet, this does not necessarily mean the women participate actively in the local government. According to Anuja Jha, ward councilor in Madhubani, only two or three women councilors are active in the Nagar Parishad. She says the others only come for the meetings that are compulsory but say nothing at them.

Jha, on the other hand is already on the District Planning Committee, even though it remains non-functional. She has an MA degree and sees a future career for herself in politics. "Politics is janata ki seva", she says. "I decided to enter because people said only men could do it. I said, why not women?" 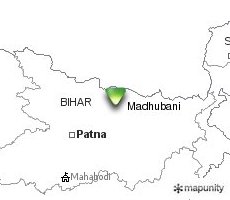 The queues here are not for railway tickets but in front of the ATM machine. There are four ATM machines in Madhubani. They run out of cash on most days and work sporadically as electricity plays truant with regularity and the battery backup often runs out.

According to Jha and other councilors the main problem they face is the rapid turnover of Executive Officers. In two years, four or five Executive Officers have come and gone. They stay only for four or five months, she says. As a result, even if the councilors propose projects for their wards, no decision is taken. Says councilor Vijay Chowdhury, "Till today, we have passed things on the agenda but not a thing has been executed on the ground. We have money lying in our fund that is earning interest instead of being used."

Municipal finance is plagued by the inability of urban local bodies in small towns to collect even the taxes that they are supposed to get as revenue. On average, only 30 per cent of such taxes are collected. The Madhubani Nagar Parishad has devised a novel way of ensuring that it collects house tax. When people come to the municipal office for caste certificates, something that people need for everything from admission to school or college to whether you get a job in a reserved quota, they are asked to first pay their dues of house tax before the certificate is issued. As a result, the Nagar Parishad's coffers are in better shape than ever before in the past.

But councilors despair that these funds are not being used for the benefit of the citizens of the town. "Paise ki kuch kami nahi hai, samajh ki kami hai" (There's no shortage of money, but of good sense), says one of the councilors.

The story of many small and medium towns in India mirrors that of Madhubani. There is no planning - this town did not even have a map until PRIA intervened - the elected representatives have few powers, bureaucrats are not interested in being posted there and even available funds are not utilised. As a result, a town that has the potential to be a sustainable urban centre is left to rot.

Kalpana Sharma has been Chief of the Mumbai Bureau and Deputy Editor with The Hindu. This is the first in a series on a few of India's small and medium towns where half of the total urban population of 285 million people lives. While the needs of rural areas and of the big cities are addressed, these smaller towns tend to escape the notice of planners and the media. This series attempts to draw attention to this growing and changing India.