The unkindest cut of all

Post October floods in North Karnataka, Dalits find themselves in a greater predicament. A century of struggle for equal rights and worse, fundamental faith in human progress, is at stake, writes Savita Hiremath.

On September 30, hours dragged by and the black shadow of calamity brooded over Hachcholli of Koppal taluk. People looked up into the sky heavy with scudding clouds and misled themselves into thinking that it would be just another downpour. A day later, they were in the midst of an unprecedented tragedy as the rain-swollen Tungabhadra and Hagari rivers swept mercilessly everything that came in their way. 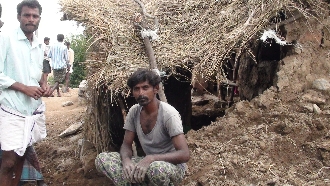 A Dalit in front his house in Kakkaragol of Koppal taluk. Pic: Savita Hiremath.

They now know what it means to have houses submerged, fertile fields stripped, bales of cotton soiled, sacks of rice soaked, cattle dead, and women and children turned to starve.

Once the waters receded, it was a ghastly trip home. For some there was no trace of home at all, just a clean sweep of the past. Once the government launched emergency relief measures and installed some sheds, things began to fall in place - caste was the first priority. Although there was no semblance of order or discipline while distributing food and relief material, isolation of Dalits was achieved with utmost urgency and sincerity. The fringes were neatly delineated and thats where they were sent back again.

In some villages, they werent even allowed to take shelter in temples and schools, says Basavaraj Kowtal, convenor of Human Rights Front for Dalit Liberation-Karnataka.

This segregation came easy in Hachcholli. Post 1992 floods, a sizable SC/ST population was housed in sheds put up a kilometre away from the village. This time the rest of the Dalits were told to move in with others. This distance has cost them dear. A huge portion of relief material reached the upper caste, well-to-do families while 300-400 families living on the periphery remained unaware of the goings-on.

Marthamma (50) rues that relief material including plates, tumblers, blankets, lanterns, and kerosene stove didnt even reach them. Only some NGOs helped us. Officials do not visit us. Even if they come, they just talk to some people at the entrance and go back.

When I visited Hachcholli and Shridharagadde of Bellary 45 days after the floods, casteist politics at gruel centres (ganji kendra) was striking. With the curtain of prejudice keeping them automatically away from the overcrowded centres; invariably, it was the dalits who returned hungry.

Kowtal, who toured worst-hit Bijapur district, says nowhere did he come across a single centre set up in a Dalit colony. The officials set up one centre for 2-3 villages and none for Dalits despite being aware that casteism is intense in villages. The possibility of Dalits eating food with the rest simply does not exist. In Kowligi (Bijapur), Dalits were told to get their own plates although they had none. Even hungry children werent spared.

Survey based on 1992 records

The bias cuts so deep that in Anjotigi of Indi taluk, 25-30 Dalits are living in only five sheds of 10x10 dimensions. Life inside is far beyond any reasonable endurance. These shacks can house only hostility - not humans by any stretch of imagination. Ramesh K, member of Bijapura Shoshithara Abhivriddhi Vedike (a newly constituted forum to fight discrimination against flood-hit Dalits), confirms that people are being stuffed into these sheds like cattle.

Grave errors have crept in, with officials refusing to survey Dalit colonies. The errors appear deliberate. "They are using the 1992 records to fix compensation. Many new houses have come up since then but they werent given proper property records. And those who did own have lost them to the floods. Now these records are a must to get relief, says Kowtal.

In Hachcholli, Dalit youths showed me some unsigned bearer cheques and a slew of unacknowledged petitions seeking relief for damaged houses. One unique case was Sathveerappas, whose mother Venkamma was the only villager washed away in the flash floods. Despite repeated pleas, the Rs.1 lakh compensation announced by the government was elusive. When we asked for compensation, they said what do we do if someone dies? Later they told me to get a death certificate. Now they are not even ready to sign on it.

When contacted, Siruguppa Tahsildar Geetha N R said she was not aware of such cases and would look into it personally. But she was quick to mention that these people were frittering away their time and relief money at arrack shops. Reacts Kowtal: How long will this money last? Why can't the officials give cheques to the women if they are so concerned?

If the system is dehumanising the Dalits over their identity, religious heads are trying to strip them of the same - the most unkindest cut of all.

Be it Marthamma, Ramesh, or Sathveerappa, the only thing that the floods could not take away from them is their identity. Not so anymore with religious forces in particular exploiting the situation under the guise of charity.

Kowtal says in Hulgunchi of Raichur district, local seer Ram Krishna Swamiji offered to adopt the village provided it is named after him. He also insisted that the victims deposit their relief money into his bank account and he would add his own to build a new colony. These religious heads are trying to push us back into the same Hindutva mould we have been keeping at bay for centuries. Now we have to live in Hindu colonies and walk on Hindu roads. Back to 100 years - all over again.

They feel the atrocities committed against Dalits so far were isolated and individual instances on certain people or villages. But now they have it in bulk. This is an opportunity for the casteist people to put their deepest prejudices against Dalits to work and co-opt us by giving food and shelter when we are down on our knees.

Kowtal is also critical of the state governments willingness to involve RSS-backed Seva Bharati which allegedly left Muslims and Dalits out of its rehabilitation schemes after the Gujarat earthquake. Basically its a casteist government and a majority of those who run it are also casteist. Obviously their interests are protected.

On December 13, their nightmare came true with Chief Minister Yeddyurappa announcing that the shelters built by the Mutts and private firms would be named after them.

Suspended between the predicament of losing their identity and the nasty persistence of the bureaucracy, religious generosity to hem them into their own ideology, the plight of the dalits untangles many a sordid tale wound into a skein by the ravages of the floods.

Floods spared them, but not bureaucrats

Karnataka's bureaucracy eliminated what even the worst floods of the century spared. Patelgalli - a declared slum dominated by 500 Dalit families in Bijapur - will remember the October floods for a different reason altogether. The slum, perching on an elevated land, escaped the fury of the floods with minimal losses only to be flattened by three bulldozers, pressed into service by the district administration, in just 2-3 hours. The victims protests to save over 500 houses turned futile as did their efforts to salvage their belongings.

Led by police personnel alone in the conspicuous absence of bureaucrats, Ramesh says people were told to pack up within an hour to be shifted out of their 20-year-old dwellings. When they protested, they were lathi-charged, loaded into trucks, and dumped into sheds 9 kms away from Patelgalli - a barren land with no basic amenities including drinking water. Initially, all the 4000-5000 people were forced to live in only 50 sheds of 10x10 size. They installed 60 more following our protest march. Nearly 4-5 families are living in one shed. One short circuit, and we will all perish, adds Ramesh.

Kowtal and Ramesh, who met the District Commissioner Shantha Kumar along with thousands of protesters, say how the DC ticked them off terming it orders from above and washed his hands of saying he was on leave during the demolition. They feel the administration couldnt think of a better time and excuse as the floods gave an excellent opportunity to push the Dalits over the edge.

Kowtal adds: The entire operation was so swift and well-planned. No parallel arrangements were made nor enough time given to pack things up. What was the need for all this? Even if their version was true, it could have been handled in a humane manner.

Prof T R Chandrashekar of Hampi Kannada University, who led a team of seven intellectuals and research assistants to eight flood-hit districts, finds it quite beyond the pale to see religious groups and corporates manage relief operations on their own. While appreciating their indirect involvement, he argues that the victims will not be able to question anything even if something goes wrong. This is our basic contention. The entire flood relief programme should be formulated from the human rights perspective. Not charity.

He advocates involving local panchayats, human rights groups, and the victims themselves to design their own relief schemes. If the private firms and Mutts are so compassionate, let them donate the money to the government. If people have to live with dignity, it should be the governments concern.

Adds Ramesh: enough of pity. We dont want to live on obligation forever.