Over 100 posters were displayed recently in New Delhi as part of an exhibition titled 'Poster Women'. The posters, said Urvashi Butalia of Zubaan, "visually map the history of the movement". Like windows, they offer a glimpse of the women's movement spanning the past 35 years. Deepti Priya Mehrotra reports.
22 April 2006 -

When Zubaan, a feminist publishing house, floated the idea of collecting posters from the Indian women's movement, several responded enthusiastically to the call. Close to 200 organisations and individuals sent in over 1,500 posters. Over a 100 of these were displayed recently in New Delhi's Lalit Kala Akademi (March 24 to April 5) as part of an exhibition titled `Poster Women'. As Urvashi Butalia, founder of Zubaan, said, the archiving and displaying of posters aimed to "visually map the history of the movement". In fact, the posters at the exhibition were more like windows, offering a glimpse of different facets of the women's movement spanning the past 35 years.

The women's movement has made frequent use of posters, developing a body of eye-catching visual material. Largely political in nature, they mobilised support for a cause, articulated a strong point of view or simply marked an occasion. Unfortunately, some of the most radical, spontaneous posters have been inevitably lost, made as they were on chart paper or newspapers, with bold bright paint or thick-nibbed felt pens, and pasted onto public walls with homemade glue.

The women's movement has made frequent use of posters, developing a body of eye-catching visual material...A poster showing a bride seated amidst a range of dowry items, sarcastically says, 'Sab saman ke saath dulhan free'(With all these goods, the bride's for free)

•  Who is a feminist?
•  By choice and circumstance

Yet, those that survived indicate an urgent, multi-faceted politics. The posters pay tribute to women's collective actions on a wide range of issues - health, environment, violence, political participation, literacy, sex-selective abortion, communalism, marginalised identities (such as sex workers, women with disabilities, women bonded labour, lesbians, elderly women)...and more. They indicate a wealth of struggles, by various sections of women - urban and rural, middle-class and dalit. The posters are stunning in their visual impact - testifying to the vibrance and vitality of the movement itself.

Undoubtedly, grassroots women have been the backbone of the movement. Some of the most striking posters are from small, relatively unknown `autonomous' women's groups in remote parts of the country. For instance, a poster showing a bride seated amidst a range of dowry items (household goods), sarcastically says, `Sab saman ke saath dulhan free' (With all these goods, the bride comes for free). The poster belongs to Swayat Mahila Andolan (Autonomous Women's Movement) from Bundelkhand, and leaves a lasting impression. 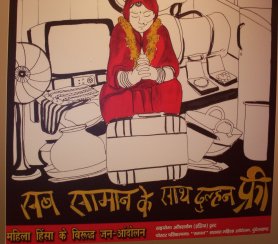 Sab saman ke saath dulhan free (With all these goods, the bride's for free). Picture by Sunandita Mehrotra.

Ordinary women became leaders when they decided they had enough of violence and exploitation. The power of women's leadership is clear from several posters. In one poster, for instance, a working-class woman wields a red flag, her face determined and steps resolute as she leads men and women workers to take militant action. In another poster, a woman amidst a clutter of media articles on violence cries out firmly, `No More Violence'.

A poster by Sama, a Delhi-based organisation, poses a direct challenge to our hypocritical health system, which has no remedies for the poor. The poster shows a ragpicker with a leaflet in hand saying `Health For All', other leaflets on the ground advertising 'Free drugs', 'Free beds', 'Pulse polio campaign' etc, while a doctor and nurse stand in front of a locked hospital door which will open only when the `key' - ie money - is inserted.

Posters displayed at the exhibition indicated that struggles against issues like rape and dowry have had marginal success - moving creatively, yet unable to root out these monstrous crimes. It can get frustrating to fight unending battles, so it becomes essential to remind ourselves that some goals have been achieved. An interesting poster by Women and Media Collective, Bombay Union of Journalists, is titled `Mathura - 10 Years After' and dated March 8, 1990. It shows a collage of news items on rape (rape by police, Forum Against Rape holding a meeting, demands for change in the law, New Bill on Rape etc) and highlights the pledge, `Let's Continue the Fight Against Rape'.

There are posters by avowedly leftist groups - such as the CPI-ML poster with a poem urging women to move forward - 'Tum badho, Sagar ke jwar ki tarah badho...' (Surge ahead, like the ocean's tide...).

From the 1990s onwards, women's groups have openly brought up issues of marginalised identities. From Baroda (Gujarat), women's group Parma has a wonderfully clever poster on lesbian rights - declaring `Indian and Lesbian' and `Lesbian Rights Are Human Rights'.

A poster on mental health from Pune-based Centre for Advocacy in Mental Health displays words that commonly surround mentally ill women - `mental', `gone-case', `danger', `sinner', `fallen' etc - while the women themselves state - `Pagal nahin insaan hain ham' (We are not mad, we are human). Dilasa, Mumbai, has some visually powerful posters on violence and health. One shows the impact of domestic violence on children's psyche. It depicts domestic violence as experienced by a child: the child has sketched `Mere Mata-Pita' (My Parents) in which a man with horns like a devil is beating his wife and pulling her hair.

There are many strategies women adopt to tackle the multiple burdens they carry. Some posters bring 'empowerment' down to earth - urging women to develop strategies, strengthen themselves and each other. A Telugu poster shows this symbolically - a woman bends to lift heavy weights, the message blazing beneath her - 'Be like Karnam Malleswari' (India's weight-lifting champion). One strong woman can inspire another!

Of late, women's groups have explicitly been working to ensure men's participation - recognising that they too need to `see' the need to change. Deepayatan State Resource Centre, Patna, prepared posters depicting men sharing housework. From Punjab's Mahila Samakhya is a cartoon-poster on the same theme: The house was a mess when only one parent was obliged to run it. It was transformed into a harmonious haven when the husband pitched in.

The entire collection will be housed in a permanent archive, and also mande available in digital format.

Coming from many different parts of India in a variety of languages, these posters provide a mirror to the women's movement in India. For greater accessibility the posters should be annotated, with dates, translations and brief contexts within which each poster was created and used. In a way, the collection marks a stage of maturity - indicating that the movement today is able to self-reflect. Women who have created an active, wide-ranging politics are turning their gaze inwards, in an attempt to `look' at their own history.

Zubaan plans to take `Poster Women' to several cities and towns across the country, with a flexible set of posters adapted to specific regional contexts. The entire collection will be housed in the Sound and Picture Archives for Women in Mumbai as a permanent archive. It will also be made available in digital format. (Women's Feature Service)

TIGER SANCTUARY : Are tigers back at the Buxa reserve?
MORE ARTICLES
on similar topics ...
ART