Are too many ‘gramasabhas’ posing a challenge to governance?

As the Kerala government takes steps to re-inspire citizens to engage in grassroots level governance, P Mohammad Nizar draws attention to certain critical issues that must be addressed for the Panchayati Raj Institutions in the state to be effectively revitalised.
08 December 2014 -

The Kerala Panchayat Raj Act 1994, enacted by the then Congress-led United Democratic Front (UDF) government, consequent to the 73rd amendment of Indian constitution, has been hailed as one of the most progressive legislations of its kind in the country. The Left Democratic Front (LDF) government, which succeeded the UDF, launched the People’s Plan Campaign (PPC) with much fanfare, placing Kerala at the forefront of decentralised administration.

In decentralising governance, Kerala opted for a big-bang mode of devolution in which all the three Fs (functions, finances and functionaries) were made available to the three tiers of the third stratum of governance. Though Kerala has consistently seen power alternating between the two dominant political fronts - the UDF and LDF – the decentralization process never really took a backseat due to a change of government. Both the fronts, to their credit, never tried to reverse the steps taken by the other.

Given this favourable environment, many Panchayati Raj Institutions (PRIs) continued to come up with innovative projects and proactive initiatives. The gramasabha or ‘people’s assembly’, as enshrined in the constitution, served as the interface between the Panchayat and the people.

During the early days of the PPC, people flocked to the gramasabha with much fanfare, but their interest has since been on a steady decline. Most of the people from the middle and upper class abstain from attending the assemblies. Not much discussion on development is seen taking place either. The attendance in many of them fails to touch even the ten percent quorum required to transact the business.

No doubt, a vibrant gramasabha is the sine qua non of aligning civil administration to the spirit of decentralisation. The thin attendance in gramasabha meetings in a politically active state, therefore, poses a serious challenge to the claims of people’s participation in governance. This has dampened the expectations of a section of the people about the natural transition from decentralised governance to citizen’s rule in Kerala.

To ascertain the causes for the general decline in interest and consequently effectiveness of the gramasabhas, one needs to keep in mind several factors, as outlined below.

Multiple gramasabhas in one panchayat: The huge population in rural Kerala  (30000 on average for each panchayat) prompted the state govt to constitute one gramasabha at each ward of the panchayat, unlike in other states. A panchayat in Kerala has an average of 18 gramasabhas. However, the basic planning unit remains the grama panchayat as a whole.

When multiple decisions and opinions reach the panchayat from different gramasabhas, the panchayat members find it difficult to aggregate them into a cohesive whole; they use the issue as an excuse to push through their own favourite projects instead. This frustrates citizens, many of whom find their genuine demands unattended.

It is for this reason that villagers gradually started staying away from the gramasabhas, reducing the gramasabha meetings into a ritual, with the mere passive presence of a only a few, who seek individual benefits like houses, latrines and the like from the panchayat.

Sheer size and mob psychology: The average membership of a gramasabha is more than 1300 and a crowd of that size can rarely arrive at a well-informed decision based on proper homework and meaningful deliberations. Even when ineligible beneficiaries are chosen for subsidies or other benefits, it is practically difficult to question it in a public meeting due to fear of antagonising a mob. In the event, the credibility of the gramasabha is at stake and it emerges as a benign meeting place for benefit seekers.

Absence of permanent headquarters: The gramasabha usually meets at impromptu or last-minute venues in the absence of a regular headquarters. This also has had a significant impact on attendance. 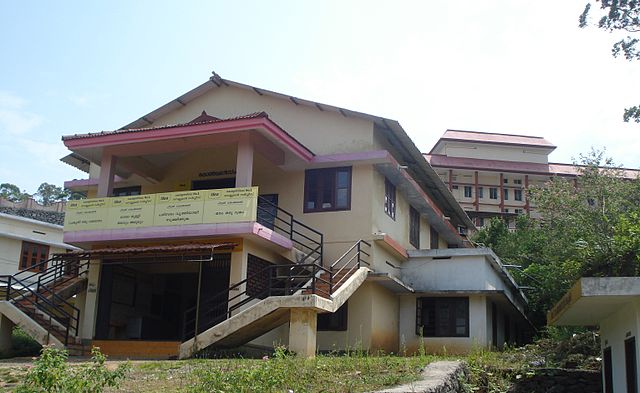 The office of a grama panchayat in Kerala. However the gramasabhas have never really had offices or headquarters to operate from. Pic: Reji Jacob/Wikimedia

It is not as if the problem has been overlooked. But massive training programmes arranged by the Kerala Institute for Local Administration (KILA) for the members of gramasabhas (voters) throughout the state could not bring much tangible improvement in the functioning of the gramsabha in terms of its attendance or the quality of discussions in it.

The Government of Kerala, upon realising the need to institutionalise the gramasabhas, also set out to provide for a building to be designated as the gramasabha headquarters, and proposed an executive committee for it.

A government order was issued in June 2014 asking the grama panchayat to open an office for the gramasabha – called the seva kendra - in each ward.

According to the order, the Sevagram Grama Kendra will operate as the headquarters of the gramasabha. It will serve as a meeting place for the Ward Development Committee (WDC) to deliberate collectively on the administrative, developmental, welfare, service, cultural and social issues pertinent to the area, to suggest solutions, to implement projects and monitor them periodically.

The grama kendra will be a meeting place for all the ward level peoples’ committees organised by the panchayat. The field level officers of the grama panchayat - such as Agricultural Assistant, Junior Health Inspector, Junior Public Health Inspector, Livestock inspector, Village Extension Officer, ICDS supervisor, Anganwadi worker, Literacy Prerak, Asha worker and  SC/ST promoter -  can now camp and operate from there, making panchayat services directly accessible to the people.

The kendra will also be an aid-centre for the local people to access information on government and panchayat services. The citizen’s charter, maps, various notifications, lists of BPL families and recipients of welfare pensions, beneficiary list of projects of the panchayat and the like shall be made available to people from there.

The kendra, manned by volunteers from among retired officers and social workers but under the overall responsibility of the ward member, will function from 3pm to 7pm on five days a week. The government of Kerala wants every grama panchayat to start its grama kendras before the next Republic Day.

The executive committee of the gramasabha – the WDC – will be responsible for the effective and efficient functioning of the grama kendra. The ward member will be the chairperson of this committee.

Apart from the two members - one man, one woman - selected from every Neighbourhood Committee as discussed below, the gramasabha will elect the following members also to the WDC:

Proportional representation shall also be given to SC/ST and traditional fishermen. The total membership shall not, however, exceed 25.

The term of a WDC is two and a half years, whereas the term of a panchayat is five years. The duties of WDC include among others:

The government order has also recommended a neighbourhood committee (NC) for every cluster of 50-100 families in a ward. It will function as a subset of a gramasabha and each gramasabha will have around five NCs under it.

All voters of the area will be members therein and there will be an executive committee consisting of 11 members, out of which 6 shall be women. One of the chairpersons/convenors of the NC shall be a woman. One woman and one man will be elected to the ward development committee from each NC.

The NC must meet prior to each gramasabha meeting. It will discuss the agenda items and take decisions regarding developmental activities and priorities. It shall also inform its members about ongoing developmental activities in the area, mobilise people’s participation and voluntary service, protect public property, campaign against social evils, help in finalising the beneficiary list, create awareness about public hygiene and conduct surveys, and collect data about local families. The NC shall meet at least once in three months and its executive committee once a month.

Prospects and challenges ahead

While many of these steps can significantly boost the functioning of gramasabhas, the problem of multiple gramasabhas meeting separately in a gramapanchayat, especially when the planning unit covers the panchayat area as a whole, still remains unaddressed.

Mobilisation of the people calls for homework and planning. Mere issuance of an order is not enough. No effort has been made so far to involve community-based organisations and NGOs in this exercise, nor have there been any sensitisation programmes for political parties.

Kerala has the highest mobile phone density and Internet penetration in the country and the whole state may be looked upon as a big city given the sweep of urbanisation. In such an urbanised area, online voter engagement in strengthening governance has not been given due attention.

The success of the government move will depend largely on the amount of space available to civil society for meaningful intervention in an otherwise highly-politicised atmosphere, and the readiness with which voters come up to assume responsibilities. After all, eternal vigilance is the price of democracy.

The author has been associated with local administration in Kerala for the last 25 years. He is also a founder-member of the Centre for Information and Guidance India, an NGO in the field of education and career counselling.