A nuclear disaster is such a complex event with wide consequences that it would be better to stop ourselves from going down a path that might lead to a catastrophe, however unlikely it may be, writes Rajesh Kasturirangan.
25 March 2011 -

Japanese trains are so accurate that you can set your watch by them. A Wikipedia article on rail transport in Japan says "The average delay on the Tokaido Shinkasen in fiscal 2006 was only 0.3 minutes," i.e., eighteen seconds. In India, there is absolutely nothing that runs with an eighteen second margin of error - can you imagine a train announcer at the Bangalore station saying "the Shatabdi express from Chennai will arrive in eighteen seconds"?

Japan's reputation for mechanical precision is not just mind-boggling in comparison with India's lack thereof; even Americans travelling to Japan are often astounded by the level of technology in that country. Yet, it seems quite clear that with all their precision engineering and obsession over quality, the Japanese were not able to fully anticipate the effects of the combination of an earthquake and a tsunami on their nuclear reactors. Now that Japan is facing a nuclear catastrophe, people are wondering why the Japanese didn't make their reactors tsunami proof, especially in a nuclear plant right next to the ocean.

We can speculate about why the nuclear reactors in Japan weren't secured and why their engineers didn't plan for a tsunami following an earthquake, but the fact remains that even the Japanese cannot plan for everything.

As the great philosopher Donald Rumsfeld said, there are unknown unknowns. It is possible that the combination of an earthquake and a tsunami was a black swan event, i.e., an event impossible to predict beforehand but obvious in hindsight. The recent economic crisis in the West is arguably a black swan event; so is the current political crisis in the Middle East. The effect of an earthquake and tsunami on nuclear reactors is a good black swan candidate as well. 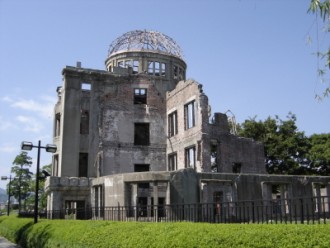 Can any politician honestly claim that our scientists have looked into all possible scenarios and created safeguards for every eventuality? And why are our scientists not raising alarm bells? (Above: The memorial dome at Hiroshima stands as a reminder of the devastation nuclear radiation can cause).

If even the Japanese cannot plan for such events, shouldn't we Indians be a little modest about our capacity to build safe nuclear reactors in seismic zones? As I write this article, the chief minister of Maharashtra has been quoted saying that he will not allow any new nuclear plants unless all safety concerns have been addressed, but then he goes on to suggest, somewhat disingenuously, that the problem in Japan was caused by the tsunami but not by the earthquake.

Suppose we accept that Japanese power plants can withstand earthquakes - but not an earthquake followed by a tsunami - shouldn't we still leave open the possibility that Indian nuclear power plants are less than earthquake proof, especially if the earthquake is more powerful than we anticipated?

Prithviraj Chavan says that in India nuclear power plants have been built at locations with the potential for earthquakes of magnitude 3.0 or lower in the Richter scale, while in Japan and in the US, plants have been built where earthquakes of 4.0 or 5.0 in the Richter scale are possible. Even if we discount that the Japanese and the Americans might be better than us at building nuclear power plants, Chavan has unwittingly opened the door for the exact opposite conclusion from the one he desires.

When the Japanese built nuclear power plants in zones where earthquakes of Richter 5.0 are possible and planned for safety procedures around that estimate, they might have miscalculated the risks. It is clear that no one expected a 8.9 Richter magnitude earthquake; the current earthquake and tsunami was a black swan event. An earthquake a million times more destructive than your planned scenario (as a 9.0 earthquake is compared to a 5.0 earthquake) is significantly worse and a lot less predictable.

Earthquake prediction can be off by an order of magnitude; how can we be sure that Jaitapur is in a Richter 3.0 or lesser seismic zone? In other words, when it comes to nuclear power plants, is it really possible to address every safety concern? While we can certainly expect him to do so in the future, can Chavan go in front of the public and honestly claim that our scientists have looked into all possible scenarios and created safeguards for every eventuality?

The lure of the atom

I understand that the Indian nuclear programme and the Indo-US nuclear deal have much psychological, scientific and financial investment behind them and that it will not be easy for the political and techno-scientific class to relinquish their interests. The nuclear and the space programmes are our scientific crown jewels, areas in which we have built expertise without much external support. The Indo-US nuclear deal is part of a massive geopolitical rearrangement of Indian national interests. A government almost fell on this issue a couple of years ago and as the latest wiki-leaks revelations show, it might have saved its skin using rather dubious means. The lure of the atom is hard to resist.

I can also understand that politicians and bureaucrats may not be qualified to address the complex dangers that underlie the Jaitapur project. They may not have enough technical knowledge to judge the dangers in the light of miscalculations in the most advanced countries in the world.

What I find strange is that none of our scientific leaders are raising alarm bells. Why are they rushing to defend the safety of the Jaitapur project? Why are they harping about Jaitapur not being in a tsunami zone? Surely something else could go wrong? What about the unknown unknowns? S K Jain, who is the chairman of the Nuclear Power Corporation of India, says that the safety of the people comes first and that all our safety systems are being reviewed every five years. I am sure he understands that Japanese must have been reviewing their safety procedures every five minutes.

The point of a black swan event is that it cannot be predicted. Since we cannot predict such complex events and their consequences, we can only do one of two things: plan for the worst case scenario as we imagine it to be and endure the meltdown when our imagination fails or stop ourselves from going down a path that might (however unlikely it may be) lead to a catastrophe.

I believe that we should stay away from black swan events of our own creation. We cannot predict earthquakes perfectly; neither can we get our trains to be eighteen seconds late or your money back. In the absence of such precision, I think it is fitting that we act humbly, and stress the potential dangers. It is time to scale back the naked self-interest being displayed in the name of science.

If the situation were different, I wouldn't expect a political and techno-scientific class acting in its own self-interest to step back from a potential disaster. But the cloud of nuclear cataclysm is no ordinary danger; if a Chernobyl-like event happens in India, the consequences for the political class will be as much of a black swan as the event itself. Some events are so horrendous that it is better not to risk them at all. Why play with the nuclear fire?