Unheard and unknown they lead

Issues that affect underprivileged women have not got enough attention in the mainstream feminist movements in India. Yet women from rural areas and from lower classes and castes have been leading struggles for their rights, says Navya P. K.

In India, feminist struggles for gender justice - for women’s right to mobility, against gendered violence and discrimination - have been concentrated in urban areas. These struggles have secured major victories for women, bringing forth both progressive laws and changes in social norms. Yet, issues of women in rural areas and from lower classes and castes - relating to livelihood, health, against practices like child marriage, etc. - have not resonated across the country as much as the urban feminist movements have.

However, India has many grassroot struggles led by underprivileged women themselves for their rights, though they may not have identified themselves as feminists. These struggles range from the Chipko movement in Himachal Pradesh in the 1970s, to recent labour strikes in Kerala. While the struggles were very much local, their impact has moved beyond them. Here is a look at some of these.

Women in female-dominated professions like nursing are usually paid very little. These professions are considered less serious, or as a “service” where compensation shouldn’t matter. Even in other professions including manual labour, the gender wage gap remain.

In Kerala, tea plantation workers and nurses recently managed to overturn such discrimination. In the tea plantations of Munnar in Kerala, the women workers who pluck tea leaves are largely Dalits who had migrated from Tamil Nadu decades ago. They used to slog 14 hours a day in harsh conditions, for minimum daily wages of Rs 232, while the average daily wage for manual labourers in the state was over Rs 500. The women lived in tin sheds without toilets, and their children often couldn’t complete school.

In 2015, when the plantation management halved the workers’ annual bonus, some women workers sat on the streets of Munnar in silent protest. Within days, the number of protestors swelled to around 12,000. The group christened themselves Pombilai Orumai. The women used to have little say in the male-dominated trade unions. So, during the protests, they kept both the exploitative trade unions and men in their own families away.

Within a month, the state government was forced to step in and the management had to  increase workers’ minimum wages to Rs 301. Some of the Orumai leaders then went on to win local body elections. This was perhaps the first time in India that a group of ordinary women workers organised successfully to counter both the management and established unions.

Similarly, nurses working in private hospitals in Kerala won their struggle for fair wages just last year. Paid extremely low wages, nurses had organised and protested back in 2012, after which their monthly minimum basic salary was increased to Rs.9500. But many hospital managements didn’t pay even this amount. Last year, nurses in hospitals across the state struck work continuously for a month, despite pressure and threats from managements. The state government then held talks with the nurses’ associations and managements. Nurses’ minimum salary was increased to Rs 20,000, in line with the recommendations of the Supreme Court-appointed Jagdish Prasad Committee.

Bangalore has seen large-scale protests of women workers too. In April 2016, the city came to a halt as tens of thousands of women garment factory workers spontaneously occupied the streets, alongside other workers. The women, who faced exploitation and sexual abuse in the factories, were protesting against the central government’s plan to restrict workers’ access to their PF accounts. The government was forced to repeal the idea immediately.

When natural resources like water and forests are destroyed, women from marginalised communities are affected the most. 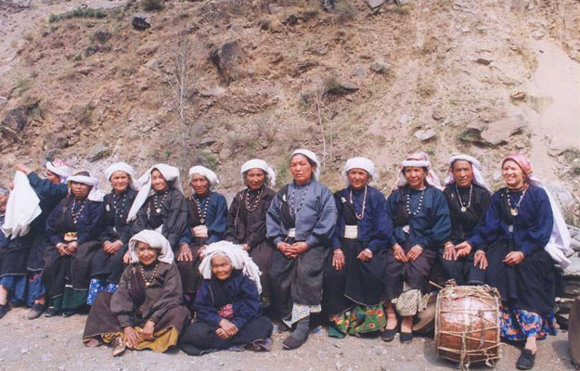 The women who took part in the Chipko movement in 1974. Pic: Wikimedia Commons

In the early 1970s, women in present-day Uttarakhand spearheaded the Chipko Movement to stop tree felling. Due to government policies and commercial interests, the forests in the area were rapidly depleting, resulting in natural disasters like floods. It also restricted the native Garhwali community’s access to forest resources; women in the community were in charge of gathering minor forest produce for survival. Chipko protest was conceptualised by a group of Sarvodaya members (followers of Vinoba Bhave), but it was the Garhwali women who turned it into a movement. Women like Gaura Devi organised other women in their villages; they hugged the trees that anyone was attempting to cut down. Eventually state government temporarily banned tree felling in the forests.

Similar to Chipko is the Jharkhand Jungle Bachao Andolan (JJBA). This statewide movement, led by tribal communities, has been growing since 2000. The movement aims to reclaim tribal communities’ right to the forest, and free it from commercial exploitation. Here too, women were affected the most, and remain a significant part of the movement. Their spontaneous protests have caused police and forest officials to back off and even abandon plans for tree felling. For example, in the village of Karma Beda, when forest department officials tried to plant commercially viable eucalyptus trees, JJBA women confronted them with sticks and sickles. Officials never returned there afterwards. Jharkand’s forests are now regenerating under JJBA’s watch.

In Kerala’s Plachimada village, it was tribal women who won the fight against the mighty Coca Cola company. A company factory in the village was drawing over five lakh litres of groundwater from the village, and also severely polluting groundwater. It affected villagers’ health and their agricultural crops. Women had to quit their daily farm labour, and girls had to quit school, to walk five kms twice a day for fetching clean water. Mayilamma, a farm labourer in her 50s, then founded the Coca-Cola Virudha Samara Samiti that held continuous protests outside the factory. Women in the community also led many demonstrations and faced arrests. Finally the factory was shut down in 2004, just four years after it had started operations.

Fight against alcoholism and domestic violence

In the early 90s, rural women in Andhra Pradesh, fed up with abusive, alcoholic husbands, led a statewide anti-liquor movement. It started when Vardhineni Rosamma, student in an adult literacy class, was inspired by a story in her textbook of a woman who fought a liquor lobby. Rosamma organised women in her native village of Dubagunta in Nellore district. The group attacked the local arrack shop in the village with broomsticks and chilli powder, and forced it to shut down. It inspired women across the state to join the movement. Their protests forced Andhra government to ban arrack in 1993, and to implement liquor prohibition in 1995, though temporarily.

Gulabi Gang, an all-women vigilante group in UP, is now well-known. But it had started in one of the remotest and most backward regions of UP in 2003, when middle-aged Sampat Pal Devi tried to stop a man from beating his wife. The man had responded to Devi with abuses. The very next day, Devi returned with a group of women carrying lathis, and beat up the man. Now there are tens of thousands of women in the gang, mostly from lower castes, who lack access to justice otherwise. They wear pink saris and carry lathis. The gang supports women victims of violence, help women earn a livelihood, and work towards stopping dowry, child marriage etc. It has also acted against corrupt government officials.

Many of these grassroots feminist movements are works in progress, and have not been completely successful. Struggles for liquor prohibition continue in Andhra and Karnataka, leaders in Pombilai Orumai movement continue to be targeted by mainstream political parties, and so on.

But these struggles have led to not just fulfilling of a specific demand, but changing the status of women in their communities. For example, women in both Chipko movement and JJBA had departed from their traditional roles. Garhwali women, for instance, had no say or representation in their traditional village councils. Men in their own community in fact had resisted the Chipko movement, in support of ‘development’. But most of the women, instead of cowing down, demanded greater representation for themselves in the village councils. The women in Pombilai Orumai say their husbands no longer abuse them.

At the larger level, these movements have set precedents, and been widely reported on in global media and researched in academic circles. Some movements have been replicated elsewhere too. The Chipko movement, for example, spurred similar movements in the sub-Himalayan region as well as the Appiko Movement in Karnataka to save the Western Ghats. There was even a  movement in Japan in 2009.

What emerges is that even though these struggles have not been formally labelled as feminist movements, they have changed the course of women’s rights in the country and elsewhere.