Of chit funds and loan lotteries

Many farmers deep in debt are trying to find a way out through playing bhishi (chit funds). Denied bank loans and desperate for credit to run their farms and for other needs, they take huge risks. The results are usually tragic. P Sainath continues his series on Vidharbha's crisis.
18 September 2005 -

Ganesh Bhimrao Thakre played bhishi and lost. He was juggling multiple debts at the time. His seven-member household had cut back sharply on its diet. "It's the same with so many farmers," says his wife Rekha. "We're at the point where if we take our household wheat to the mill, we leave it there till we can pay the miller the tiny amount it takes to grind the flour."

It also meant that Ganesh had no chance of raising the money to get his daughter Sushma, 23, married. The three and a half acres he looked after for his family in Dahihanda village of Akola district yielded little. The agrarian crisis gripping Vidharbha ensured that. Official data suggest that by 2003 around 55 per cent of farm households in Maharashtra were in debt. Perhaps double the number of a decade ago. Things are a lot worse in Vidharbha, where less than 10 per cent of loans are from banks. The rest are from the sahucars or moneylenders. Or from input dealers who are the "new sahucars." These kinds of loans have swelled in the last two or three years.

"The interest rate here is Rs.5 per Rs.100 per month," says Gajanand Pandurang, a Home Guard. That's 60 per cent. "And that is if you have something to mortgage. Otherwise it is 120 per cent yearly." No one in his village of Dahihanda knows how much Ganesh borrowed from private lenders. But they do know he played bhishi. 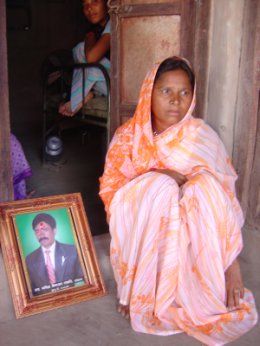 Rekha, wife of Ganesh Thakre (framed picture): "We're at the point where we can't get back our home wheat from the miller because we can't pay the tiny sum it costs to grind the flour." (Photo by P. Sainath)

Bhishi (which translates roughly as chit fund) is an activity countless farmers get into. Often at disastrous cost. The system operates under different names in many parts of the country. It is very visible for instance in neighbouring Telangana. How does it work? Each of 10 or more players contributes a recurring sum to a common pool. Say Rs.1,000 a month. This means a collection of Rs.10,000 a month or Rs.1 lakh in 10 months. Each player hopes to hit the monthly jackpot.

Why get into it? There are several push factors. Here, many land in debt even after a successful crop. "Firstly, after years of failure, people cannot repay their bank loans in full," points out Gajanand Pandurang, a Home Guard in Dahihanda. "If the crop succeeds and you take it to the Cotton Federation, they cut your bank dues. [Which they should not since they are a body to help farmers, not an arm of the banks.] Once that happens you cannot buy your basic needs. So we go instead, as Ganesh did, to the sahucars."

This meant selling the crop at way below the minimum support price to be had at the Cotton Federation. Ganesh sold cotton at Rs.1,500 a quintal when the support price was Rs.2,500. "Nor will banks give you any new loans," points out Pandurang. In that crunch, the bhishi is seen as a possible source of money.

One form of bhishi is to hold a `lottery' each month for the Rs.10,000 collected. Each member drops a numbered chit into a box and the holder of the chit drawn from it takes the booty.

The more common practice here is the `auction.' Two or three of the members get desperate to have some money. They `bid' for the Rs.10,000. But the bidding is in reverse - the money goes to the one who bids the lowest. So the man bidding Rs.6,000 is saying he is willing to lose Rs.4,000. That sum he loses is divided amongst the remaining players. Yet he will have to still pay his Rs.1,000 a month to the pool for the term of its existence. Usually 10 months if there are 10 players.

Ganesh Thakre was desperate. He had already borrowed money to meet growing health expenses. Rekha's eye operation had cost Rs.12,000. Sushma's bout of typhoid had set them back by Rs.10,000. He had also lost Rs.25,000 on son Sunil's education when the boy had to drop out of college.

It appears very likely that Thakre ended up borrowing money to play bhishi. In the rather impossible hope that hitting the jackpot would solve his problems. Bhishi is not meant to work for poor farmers in debt.

The better off ones who don't need to borrow from the pool profit from this system. In theory, anyway. They keep up with their payments and get back their full amount when the bhishi is closed. And they get some amount each month from the sums forfeited by bidders.

In practice, small farmers slide down a debt trap. They cannot keep up with the monthly payments. So they might lose their principal and continue to owe money. Or they make disastrously low bids (sometimes as low Rs.4,000. Which means they straightaway lose Rs.6,000 or 60 per cent of the amount they are borrowing. Thirdly, they can be forced to make low bids by insincere players who do not need to borrow the sum. They only make bids to force the desperate one to go lower (which increases the profits of the others).

Lastly the fund manager is very often a crook. Thakre was a member of four bhishis at the same time and was gypped in all of them. "He lost Rs.40,000 in these bhishis," says his nephew Sanjay. It also seems likely that he ploughed into bhishi some of the money he took from the sahucars.

Ganesh Thakre lost his money. Surely one factor in his suicide this June. His two young sons run a tiny vegetable stall that could fold at any time.

Sushma remains unmarried. And wife Rekha hasn't a clue as to what she can do next. "The officials did come after his suicide," she says. They promised government help. None has arrived. Not a paisa in compensation for the family though the suicide is admitted as having been debt-driven.

For farmers here, waiting for government help is a lot like playing bhishi. Only worse.