In the three days the National Commission on Farmers team toured Vidharbha, there were six suicides. In Panderkauda, the body of the latest farmer to take his life entered that town's hospital the same day the team arrived there for a meeting on farmer distress. P Sainath continues his series on Vidharbha's crisis.
31 October 2005 -

Vidharbha sits on a volcano. An agrarian one. Official data given to the National Commission on Farmers (NCF) shows that Yavatmal district alone has seen well over 300 farmers' suicides since 2001. The figures indicate suicides in the district have doubled almost every year in that period. Not that Yavatmal is the worst. It has just been relatively more honest in counting this terrible loss of lives.

Yet, like everywhere else, these data exclude large numbers of such deaths by using a highly flawed definition of `farmer.' For instance, if the main cultivator of a household kills himself, but the land is in his aged father's name, this is not counted as "a farmer's suicide."

Meanwhile, unless the government announces a hike in the prices being offered for cotton, the period from November to January could see a huge rise in even these dismal numbers. And Yavatmal is just one of several districts in the region gripped by crisis. 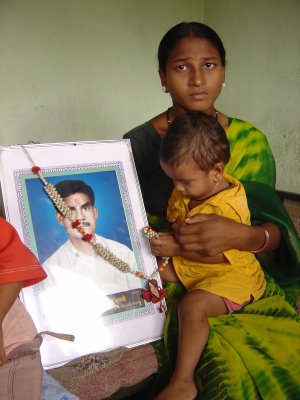 BELATED GESTURE: Varsha, wife of Maruti Rasse, 28, who committed suicide in Pisgaon, Yavatmal in June. The family which had got no compensation earlier, received it the moment their name appeared on the National Commission on Farmers' tour itinerary. - Photo: P. Sainath.

Typically, the Cotton Federation here adds around Rs.500 as advance bonus to the minimum support prices (MSP) offered by the Centre. Thus if the MSP for major varieties was roughly Rs.1700, the price offered to the farmer was Rs.2250. This year, there will be no advance bonus. It has been withdrawn. Which means - and most farmers do not know this yet - that Rs.1700 is all they will get. A straight Rs.550 drop. This works out to below the cost of production and would cripple lakhs already mired in debt.

Rs.1700 a quintal is a price farmers were last stuck with in 1994 - eleven years ago. A period in which the cost of every single input has shot up many times over.

"We have hundreds taking their lives at the price of Rs.2250," says farmers' leader Vijay Jawandia. "How many suicides there will be at Rs. 1700?" A team of the NCF, led by Dr. M. S. Swaminathan, toured this region for three days. It has issued an appeal for a higher price for cotton. And for linking MSP "with the wholesale price index (WPI). As is done in the case of salaries and allowances of government employees."

The NCF's appeal is vital and urgent. For Vidharbha is in a damned-if-you-do, damned-if-you-don't trap. A bumper harvest could further depress prices. More so since millions of bales of cotton already lie in stock. With the United States alone subsidising its 25,000 cotton producers to the tune of $ 3.9 billion a year, world prices are already at a low.

On the other hand, a failed crop would wipe out farmers who have borne their highest input costs ever. Bt cotton area has increased 30 per cent. Which implies even greater input costs. And some of them have sown two, even three times in the same season after being hit by crop failure. With Diwali around the corner and prices tumbling, distress sales will begin soon. Maybe at prices as low as Rs.1,400 a quintal.

In the three days the NCF team toured Vidharbha, there were six suicides. In Panderkauda, the body of the latest farmer to take his life entered that town's hospital the same day the team arrived there for a meeting on farmer distress.

The NCF team was deeply moved by its experience and called for urgently needed measures. For instance, the Commission has bluntly stated: "Without a huge infusion of credit, there is no hope."

Some of team's village visits were a revelation. Asked by the State Minister for agriculture, who accompanied the team, why they did not try selling milk, farmers scoffed: "Milk is selling at Rs.9 a litre while Bisleri goes for Rs.12 a litre. Is that any price? And there's a huge fodder shortage here, anyway." That shortage has followed the decline in Vidharbha of jowar - a source of fodder in this un-irrigated land.

One suicide-hit household the team visited, that of Maruti Rasse in Pisgaon, got compensation 72 hours before their arrival. The tragedy had occurred months ago. But official help showed up the minute the household appeared on the team's itinerary.

"I asked my friend, a banker, for a loan," one farmer told the NCF at a public meeting in Waifad village of Wardha district. "My friend said, sure, but not as a farmer. That way you get nothing. Start some enterprise like a shop selling seeds and I'll give you a loan. I did and I got a loan of Rs.2 lakhs. The shop failed. I am not cut out for business. Now I was in worse trouble. I told my friend I could not repay. He said that was no problem. Pay Rs.25,000 and we'll cover up the rest of it in some other losses. I did what he said and it worked."

"That is the difference between seeking a loan as a farmer and asking for it as someone from commerce or industry." The team also listened to farmers who had mortgaged several acres of land to pay their health bills. The collapse of the public health system had placed them at the mercy of predatory private hospitals.

Some of the government-organised visits for the team were strongly criticised by leading sections of the Marathi press like Sakaal. A few meetings were not announced at all, or had their venues changed at the last moment. So many who wanted to attend them could not do so. Yet, even these events proved embarrassing. One of them was wound up with alacrity after farmers challenged some tutored speakers as agents and brokers of the Bt seed companies.

The NCF has called for a "Centre-State Contributory Price Stabilisation Fund." For linking MSP to the WPI. For a huge infusion of credit. For the Cotton Federation to pay farmers at one time and not in instalments (Many are yet to get their dues for last year's produce.) They have also called for a hike in import duties on cotton and for checking the dumping of subsidised cotton on the Indian market to prevent distress sales. It has importantly suggested that the price of cotton should reflect "what the international price would be if these price-distorting subsidies [of the U.S. / EU] were not there."

Without swift action on these measures, the November-January period could bring Vidharbha its most deadly harvest yet.