Should farmers sow early? Or wait to be sure that the first rains aren't just temporary? Should they borrow early, or wait until they are absolutely ready to sow, even if it means higher risks later? P Sainath finds that in Vidharbha, farming itself is a great gamble, with many victims.
28 June 2005 -

It is a kind of rural Russian roulette. Only there is more than one bullet aimed at the player. Vidharbha's farmers are involved in a deadly gamble that concerns the monsoon but goes far beyond it. No one is sowing till the last minute. Those who have purchased seed are holding back. Many are yet to buy their inputs for the season. Some have not even decided what they will sow. As Vijay Jawandia, a farmers' leader in Wardha, puts it: "Most do not know till the day before whether they are cotton growers or soybean farmers."

The immediate gamble is on the rains. "Last year's pre-monsoon showers caused a lot of confusion," says Yavatmal Collector Harshdeep Kamble. "So they are being extra cautious this time. I am really worried about how the rains will work out." 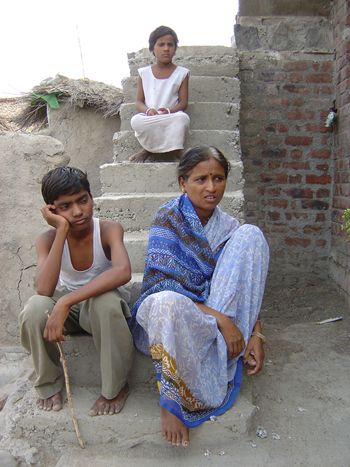 Many farmers in 2004 sowed not once but three times in this region. Like Namdeo Bonde in Kothuda village. "He sowed three times, you might even say four," says his brother Pandurang. But the showers only misled him. "He got a little bit with the third sowing. But the costs were killing. By his third try, input dealers were charging 50 per cent to 80 per cent more. And then his crop failed." Sunk in debt, Bonde took his life last November.

"No one has sown a seed so far in this village of Durga-Vaidya," says Vinayak Gaikwad, a farmer in Buldhana. Gaikwad, a kisan sabha leader, says: "Even when the rains come, people might wait a bit longer to make sure." That is Gamble 2.

"Equally," says D.B. Naik farm activist in Bham in Yavatmal "if you buy and sow after the first showers and the rains stop, you're finished." That is what drove Laxman Wankhede of Ejani village to suicide last October.

Gamble 3: "Acting late gives you some flexibility," says Gaikwad. "You can decide at the last moment what you will sow. If the rains are bad, you choose what needs less water." With three failed sowings himself last year, he should know. "Also, by waiting you can switch from `late' to `early' varieties of seed." `Late' varieties yield more but take much longer, up to six months. `Early' types yield less but are out in under five months. When the rains are late, farmers switch to the `early' type.

Gamble 4: "Buying inputs too early means your loan burden is higher," says Suresh Deshmukh in Talegaon village, Yavatmal. "What if the rains come in July? A farmer buying inputs in May pays interest for two extra months."

This is a big problem where perhaps 90 per cent of crop loans are from moneylenders. Their interest rates vary from 60 per cent to 120 per cent per annum. Deshmukh's brother Ramesh ended his life last year, crushed by his debt burden. This `flexibility', as many point out, can be a forced one. "I have no money to buy the inputs," says Ranjana, widow of Ramesh Deshmukh. "Who will offer us loans now?" Given her husband's fate, lenders see the family as a high-risk client. "Also," says Suresh, "dealers first attend to cash-paying clients. Those needing credit come much later."

Gamble 5: Those who have bought seeds are betting heavily on BT cotton. K.R. Zanzad, quality control inspector at the Agricultural Office, Yavatmal, says: "Last year, 7,000 bags of BT cotton varieties sold in this district. This year - so far - one lakh."

In Andhra Pradesh next door, BT cotton results have been disastrous. And approval has been cancelled for some varieties. Yet Vidharbha could see 70 per cent or more of farmers opting for BT in despair-driven hope. The risks are enormous.

Gamble 6: Buying inputs late could jack up prices as everyone scrambles for seeds and fertilizer at the last moment. Unless, of course, the monsoon fails and there is no demand. Just now, it seems prices will go up. There will also be a last minute rush for labour as all seek it at the same time. Many small farmers work on the fields of others as well.

But with a late start, all will be tied down to their own plots. That means a rise in cost of labour - and not getting it when you need it.

Moreover, the last minute rush for crop loans will push up already high interest rates. So while holding back saves a month of interest, last minute credit comes at higher rates. The banks play no role at all in this.

Gamble 7: Striking late deals could well force the farmer to sell his crop to the input dealer at way below the minimum support price (MSP).

Gamble 8: "If it rains well today, the farmer just has to buy seeds," says Sanjay Bhagat in Mahagaon tehsil, Yavatmal. Bhagat, a veteran journalist, is also a director on the Agricultural Produce Market Committee (APMC) here. "Those pushing an artificial shortage can then sell at any price." This means many could end up buying spurious seeds. A fast emerging problem in the region. Fake seeds have been linked to several farm suicides across the country.

Gamble 9: Late sowing could also expose the crop to higher risks of disease and pest attack. That again feeds into higher costs.

"The great gamble is farming itself," says Vijay Jawandia. "This is what policy has done to the farmer. Be it on credit or support price." Some are cracking under the tension. Like young Abhay Shamrao Chavan in Mulawa village, Yavatmal.

"The rains were just the last straw," says his brother Vasantrao. "He was in real despair about credit. Yet if it had rained on June 12, he would have been here to tell you about it himself."