A misplaced emphasis on highways?

Why does the government continue with its blind focus on highways and expressways when infrastructure for water supply, waste management and mass transit system is in desperate need of attention? Kannan Kasturi criticises the government's prioritization and says there is more to public infrastructure than just highways and expressways.
29 May 2016 -

Highways have occupied an exalted place in central government spending on infrastructure ever since the first NDA government. The 2016-17 allocation for the Ministry of Road Transport and Highways is no exception. At Rs 58000 crore, it is 23% higher than the previous year and most of it is budgeted for developing National Highways. In comparison, the Ministry of Water Resources, River Development & Ganga Rejuvenation has a budget of Rs 5500 crore, half of which is for the Namami Gange program to clean up the Ganga.

The usual economic justification for investing in highways is that they will have a “multiplier effect”. The argument is along these lines: highways will lead to greater efficiencies in trade and industry by allowing faster transport of goods. On the other hand, investment in “social infrastructure” – such as water or waste management - may not offer immediate benefits to the economy.

The government’s lopsided emphasis on highways is not entirely without support. It has the approval of a section of the car owning public that has discovered the joys of fast inter-city travel without the constraints imposed by public transport. But more significantly, it has had the approval of corporate India for whom it opened up another area of business.

Corporate involvement in highways was initially limited to executing government contracts. Setting itself ambitious targets for highway addition, the government came up with a new form of “Public Private Partnership” (PPP) that allowed corporations to invest in and own public highway infrastructure and earn toll income. The justification of this form of PPP – the “build operate and transfer” (BOT) toll model - was that it would bring in private investment into infrastructure and thus make possible infrastructure addition at a faster rate than would be possible with the government’s own resources.

The BOT toll model became popular very quickly. The government had in parallel made changes to policy that made it easier for banks to finance infrastructure. Corporate investments were made on the back of large scale borrowing from banks, exploiting the banking norms that allowed up to 70% debt financing for infrastructure.

Under government prodding, public sector banks who were the major corporate financiers (they account for 73% of all lending by banks in India) channeled national savings reserved for lending to infrastructure disproportionately to highway projects. According to RBI data, outstanding bank loans to the roads sector is Rs 1.8 lakh crore as of Mar 2016. 80% of bank lending for infrastructure is in just two areas - roads and power. The remaining 20% is shared between infrastructure for telecom, airports, ports and “social infrastructure”.

In the last few years, private ownership has turned the spotlight on the economics of highways. A large number of projects are unable to service their debt taken mainly from public sector banks. They have become non-performing assets (NPA’s) for the banks and this is reflected in the statistic that 50% of bank NPA’s are in the infrastructure sector which is largely just roads and power. The major role of public investment even in the BOT toll model stands exposed. The government will ultimately have to pay for the non-performing ‘highway assets’ held by the public sector banks, one way or another.

While delays in land acquisition and environmental clearance leading to cost overruns are commonly held to be the cause for non-performance, many of these projects have not had the expected initial traffic or traffic growth at the rates envisaged during planning. In particular, goods traffic growth on toll roads has been abysmal. This has resulted in toll collection – despite yearly increase in rates – falling short of debt servicing requirements. The poor traffic growth shows up the specious nature of the economic multiplier argument for highways.

The unattractive revenue from toll has pushed the government in recent times to resort to forms of engagement with private corporations where the revenues of the private partner are independent of toll collected. The contract model is once again in vogue. The government is also pushing various “annuity” models where the infrastructure companies cover the investment requirements fully or with government participation, build and operate a highway and receive an agreed amount as annual income. In this arrangement, the government collects the toll and bears the traffic risk.

In other words, the government is back to encouraging “risk free capitalism” in the roads sector. The need for these forms of engagement is telling; private corporations do not see economic justification in these highways but the government will nevertheless build them.

A recently completed mega highway project – the Yamuna Expressway - for which detailed information is available in the public domain, corroborates the general picture of the performance of recent highway projects in India. It also illustrates an alternate model of financing – “land value capture” - that has been used to build grandiose economically unviable highways.

The Yamuna Expressway – a case study 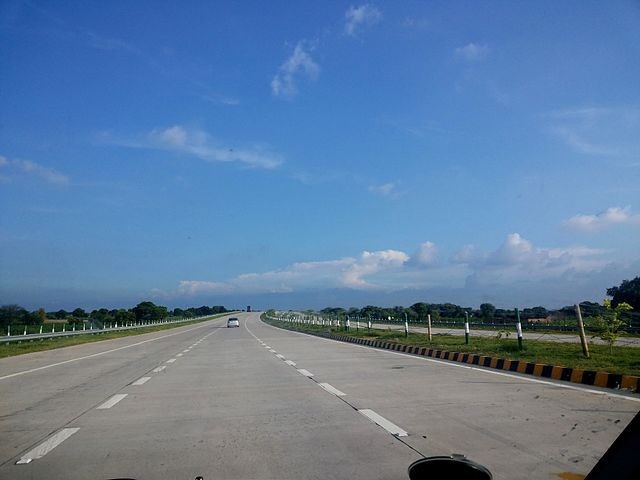 The Yamuna Expressway project connecting Noida (on the outskirts of Delhi) to Agra was initiated in 2001 by the BJP Government in UP lead by Rajnath Singh. It was to be a six lane access controlled highway. The economic justification provided for the project was typical: besides encouraging tourism, the highway would “open up avenues for industrial and urban development” of the region.

The Jaypee Group, one of only two bidders, was selected for the project during Mayawati’s tenure as CM of UP. The private partner would make the entire investment and have rights to the toll. Anticipating that toll revenues would be inadequate, the government came up with a scheme where the builder could recover his investment in the expressway through “land value capture”.

The government would acquire land along the expressway and pass this on to the builder for developing urban townships. The value of the land was expected to go up for several reasons - the change in land use from agricultural to urban (residential, commercial, industrial) decreed by the government and the speedy access to Delhi and Agra via the expressway from these pockets.

A CAG audit of the partnership agreement carried out in 2012 was extremely damning. It found that the government of the day accepted the cost and revenue projections of the developer without any independent analysis. It also recorded that the government allowed the developer to actually select the location of the land parcels! Nearly three fifths of the 2500 hectares of the land selected was in the National Capital Region. 500 hectares was prime real estate in Noida.

It took till 2007 for the UP Government to decide on the alignment of the expressway after which the newly formed Jaypee Infratech began project execution. The project was completed ahead of time and what is touted as India’s most advanced highway was opened to traffic in Aug 2012.

As is the case with most highway projects, the traffic projections for Yamuna Expressway turned out to be wild. An average of 16490 vehicles used the highway per day in 2014-15 against the expected 100,000. The annual revenue from toll for that year was only Rs 168 crore on a highway on which the company claimed to have invested Rs 9962 crore. (For comparison, the annual investment in the railways which transports 13 million passengers a day is now around Rs 40,000 crore.)

True to the general pattern, the project expenses were met mainly through borrowing from banks. Jaypee Infratech’s debt stood at more than Rs 8700 crore as of Sept 2015.

The low traffic indicates that the hopes of the access controlled “world class” expressway spurring economic development in the region were misplaced. Some of the reasons for the low traffic are related to the very conception and design of the highway. Access control has meant that people of towns and villages along the Yamuna banks cannot use the highway and will not reap the benefits of faster travel and transport to the metros. The high toll on the expressway has kept potential users away despite heavy congestion on the alternative NH 2.

Even the Taj tourist does not seem to have benefited greatly. While the 165 km length of the expressway can be negotiated in 100 minutes, the congested roads from Delhi to Noida (where the expressway begins) and the drive through Agra to the Taj bring home the reality of roads in urban India.

The land along the course of the expressway is fertile canal irrigated three crop farmland. Farmers co-operated with the government when land was being acquired for the highway. However the government’s move to acquire land to hand over to the company for urban enclaves met with resistance. The government used time tested methods to harass farmers – disconnecting electricity supply, stopping cultivation and implicating them in false cases.

The government agency acquiring land has the high sounding name of “Yamuna Expressway Industrial Development Authority” (YEIDA). It has plans of ‘developing’ much more land along the Expressway - a draft master plan of Feb 2011 shows no less than 58000 hectares earmarked for development! Among the first acts of ‘development’ of YEIDA was acquiring and transferring 2500 acres of land in Greater Noida to the Jaypee Group for a race course and a “sports city”.

In the run up to the inaugural Formula 1 race at the racecourse built on their land, farmers in the villages of Bhatta & Parsaul at the outskirts of Delhi protested demanding that their land be returned. Clashes took place between farmers and the police in which four people lost their lives. Subsequently, the government let loose a reign of terror on the hapless villagers. Thus was acquired the land which would pay for the expressway.

Farmers were paid an average of Rs 35 lakh/acre by the government for the 6175 acres of land acquired along the expressway. The expressway builder paid the government on average Rs 44 lakh/acre. By 2013, the company had sold a 300 acre piece of this land lying near the race track to a real estate company at Rs 5 crore/acre!

Fifteen years after the project was conceived even the urban enclaves along the expressway have not materialized, let alone industry. However, the rural agricultural economy has been made poorer with the loss of large tracts of fertile irrigated land.

Why not social infrastructure?

The overall experience of highway development in India over the last 15 years is of low traffic volumes and slow traffic growth. Toll revenues do not provide an adequate return on the investment in these highways. Low traffic growth also exposes the specious nature of the “economic multiplier” argument.

The question that presents itself is this:  why does the government continue with its blind focus on highways and expressways despite this negative experience?

There is no shortage of infrastructure outside highways that is in desperate need of attention. The low priority for water infrastructure has made the country extremely vulnerable to vagaries of nature. This is seen in the terrible scarcity of even drinking water affecting a large part of the country today. The lack of adequate waste management has polluted all the lakes and rivers near our urban areas and is rapidly making our cities unlivable.

The central government cannot absolve itself of responsibility by claiming that “social infrastructure” is in the domain of the states. It is high time it changes priorities from “world class expressways” that will benefit only corporate interests to infrastructure that has an immediate impact on the life of the average citizen.