Questions over AFSPA continue to echo in ‘disturbed’ northeastern states

The Centre may have rolled back its sudden unilateral decision to accord ‘disturbed area’ status to Arunachal Pradesh under the AFSPA 1958, but that does little to restore confidence and good faith between the state and the government of India. Anjuman Ara Begum analyses why.

It was a bolt from the blue for Arunachal Pradesh on 7 April 2015, when 12 of its districts were declared ‘disturbed’ and the Armed Forces (Special Powers) Act 1958 (AFSPA) was extended to the state, over and beyond the districts that were already under the Act, namely Tirap, Longding and Changlang.

Section 3 of AFSPA empowers the central government to declare, suo motu, any area in northeast India as ‘disturbed’ and call upon armed forces to ‘aid’ civil administration in order to maintain law and order in the state.

The declaration has an enormous impact on the state. It means that the army can exercise ‘shoot to kill’ power and there is virtually no legal remedy for any arbitrary killing or torture. AFSPA has been applied in extensive parts of north east India since 1958 and the region has witnessed wide abuse of the said Act.

Strangely, the chief minister of the state or his office had no clue to this recent declaration bringing the whole of Arunachal within its purview. Sensing trouble following widespread protests and vehement condemnation from the people of the state, the central government has now decided to roll back the declaration from the state.

This sudden extension and subsequent revocation of AFSPA in Arunachal Pradesh is unique as any withdrawal of the draconian law is unheard of in the north-east. Serious questions may be raised about the lacuna in our federal system of power sharing that made it possible for such an authoritarian act in the first place. The recent episode is also reflective of the lack of confidence and cooperation between the Centre and the Arunachal government rather than a ‘communication gap’ between the two as has been claimed by the Union Minister of State for Home Affairs Kiren Rijiju, who hails from the same state.

This is not the first time that the central government has declared an area as disturbed without informing the state. It is well established that the extension of ‘disturbed area` status in north eastern states since 1955 has been a routine administrative exercise. The region has experienced such hegemonic and arbitrary acts for decades now.

In 1955, the Naga inhabited areas of Assam were declared ‘disturbed area’ under the Assam Disturbed Areas Act, 1955. In 1958, AFSPA was enacted and enforced in Assam which has a similar provision for declaration of ‘disturbed area’. Nagaland became a separate state in 1963 and AFSPA remains enforceable there too.

In 1972, the north eastern states were reorganized geographically and accordingly AFSPA was amended. This amendment empowered the Central Government to unilaterally declare any area in the north east of the country as disturbed. The entire state of Assam was again declared a disturbed area in November, 1990 under AFSPA to counter the rising threat of the United Liberation Front of Asom (ULFA)-sponsored militancy. Till today Assam remains disturbed through a routine annual renewal of the declaration. 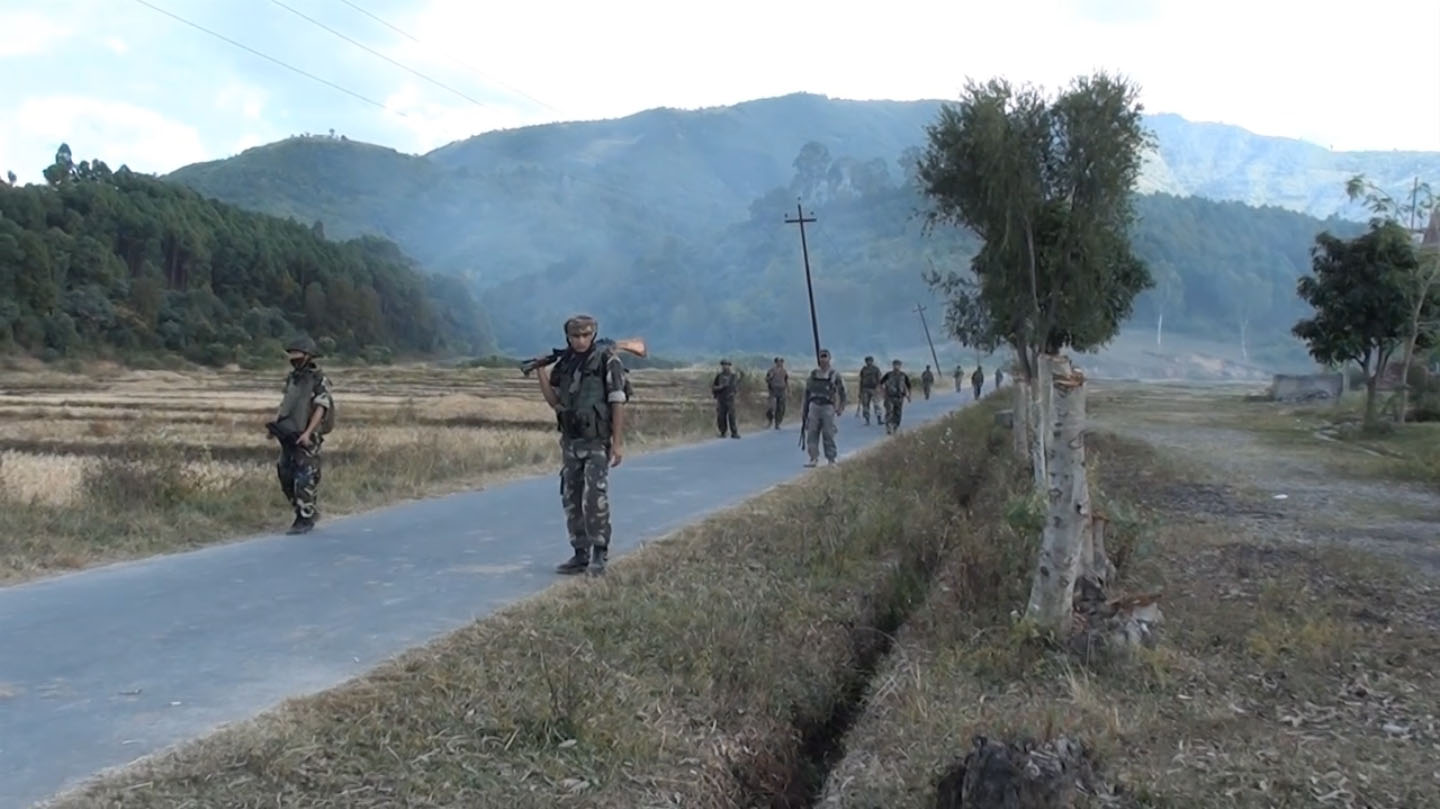 Army patrol in the village of Ningel in Manipur. Pic: Anjali Nayar (India Together files)

The entire state of Manipur has been accorded ‘disturbed’ status since 1980. Later, after strong agitation in July 2004, it was partially lifted from Imphal city. Nagaland too remains a ‘disturbed area’ till today while 34 police stations of Tripura too have been thus marked.

On 17 September 2001, areas in Arunachal Pradesh, Nagaland, and Meghalaya, lying within a 20-km range from the Assam border were also declared disturbed areas by a notification of the Ministry of Home Affairs.

The Supreme Court of India in 1997 tried to restrict the exercise by imposing timelines and a periodic review of the situation. Despite this however, the legacy continues, with the recent imposition on Arunachal Pradesh being the latest case in point.

It is really sad that the country still lacks a definition of what constitutes a ‘disturbed area,’ where ‘shoot to kill’ power is enforceable.

In 1980, Guwahati-based lawyer Indrajit Baruah challenged the declaration of disturbed area under the Assam Disturbed Areas Act,1955. The case was transferred to the Delhi High Court for the final judgment (Indrajit Barua vs. State of Assam and another, AIR 1983 Del.514). The Delhi High Court simply ruled that the term is ‘well understood by the legislatures as well as the people of India’.

The absence of legal clarity over the definition of disturbed area and the necessity of consultation with the state was ignored by the judiciary again in 1997, when the Supreme Court (Naga People Movement for Human Rights vs. Union of India, AIR 1998 SC 431, popularly known as the NPMHR case) commanded that there is ‘no requirement’ but it is ‘desirable’ that the central government consult the state government before making the declaration.

Despite the above, however, there have been four occasions when the Nagaland state assembly passed resolutions against the extension and each time these resolutions were ignored by the central government so that the declaration of ‘disturbed area’ continues to apply in the state.

Another state Tripura, which ironically is often claimed by the government to be an example of successful counter-insurgency operations, also remains disturbed. This is despite the fact that Tripura has hardly had any major armed encounter in recent years.

Imposing the status of a ‘disturbed area’ has been made easier by the fact that consultation is not mandatory and the central government is vested with overruling powers. The Supreme Court in the NPMHR case did not take a very progressive step in this regard and only ‘suggested’ that the central government ‘consult and seek cooperation’ from the state government. However, even this ‘suggestion’ has rarely been put into practice, as is evident in the recent declaration.

Unilateral, back-door imposition of emergency situations has been continuing in the country even as the Government of India claims internationally that there is no situation of armed conflict in the country.

The declaration of disturbed area and calling in of armed forces to ‘aid’ has in reality replaced the mechanism of civil administration. Instead of working ‘hand in glove’ with the government, the armed forces work as an independent body.

Reports of movement of armed forces in Arunachal Pradesh without information of the civil authority surfaced when women were allegedly molested by its personnel at Jullung village under Lower Taraso police station, Parum Pare district on 6 April, 2015. Media reports indicate that initial police investigation has confirmed molestation by men in the army.

The abuse of power under AFSPA is most blatantly visible in Manipur where rampant fake encounter killings and a culture of impunity has become the norm rather than an exception. Widows of victims of fake encounter killings organised themselves as Extrajudicial Execution Victim’s Family Association along with Human Rights Alert and have challenged the encounter deaths of 1528 persons in 2012. While conducting a trial in six cases out of these 1528, the Supreme Court found that all six cases were, in fact, staged murders and noted legislative failure to tackle insurgency. The final verdict is still awaited.

The Gauhati High Court in several of its orders took serious note of the abuse of power and proactively restricted the role of armed forces ‘to assist the civil administration so as to give confidence to the innocent and law abiding people’ (Nongshitombi Devi vs. Rishang Keishing, (1982) 1 GLR 756, Luithukia vs. Rishang Keishing, (1988) 2 GLR 159). The reality is, however, far removed.

The monetary implications of the declaration of `disturbed area` cannot be ignored either, as this fetches additional budget allocations. In a corrupt system, this aspect gains special relevance in the context of recurring extensions of `disturbed area` status.

The records of the Parliament of India suggest that the central government has been providing financial assistance for the ‘disturbed areas’. During the period 2011-2012, financial assistance provided to disturbed states under Security Related Expenditure (SRE) were to the tune of Rs 153.04 crore in Assam, Rs 83.11 crore in Nagaland, Rs 28.88 crore in Manipur, Rs 39.25 crore in Tripura, Rs 27.82 crore in Arunachal Pradesh, Rs 342.27 crore in Jammu & Kashmir [Lok Sabha, Unstarred Question No 1195].

However, such financial obligations do not deter the central government from periodic routine extensions of the Act to these states. Moreover, gallantry awards are common for those who are ‘successful’ in killings militants.

The issue of ‘disturbed area’ under AFSPA has not gone unnoticed in the international fora. In fact, international legal standards, which India has accepted as a part of its commitment to human rights, have laid down strict restrictions on imposition of ‘undeclared emergency’. 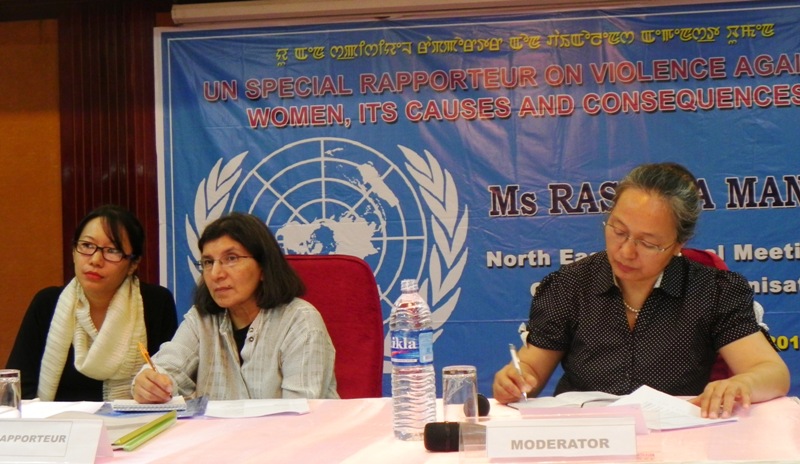 Article 4 of the International Covenant on Civil and Political Rights (ICCPR), 1977 requires that a state of emergency can be imposed only ‘in times of emergency which threatens the life of the nation’ and cautions that such measures have to be extremely temporary in nature; no derogation from right to life is permissible at any time.

The Government of India’s stand came in for criticism by the ICCPR’s Human Rights Committee in 1997. Since then, the government of India has stopped cooperating with this body by not submitting periodic reports scheduled every 4th year.

It is high time that legislative guidelines are framed for the declaration of ‘disturbed area,’ in view of situations such as the recent one over Arunachal Pradesh. A review of the existing norms and provisions related to imposition of ‘disturbed area’ status and their feasibility need to be assessed from the states’ point of view as maintenance of law and order is primarily a state’s duty . The recent development is also an opportunity to reconsider the repeal of AFSPA, a long overdue demand of the people from the entire region.

The author, based in Guwahati, is a human rights researcher.