Findings of a unique apolitical initiative that brings farmers from the Cauvery basin together indicate that a fair distress-sharing formula may not be as elusive as it seems. Shamala Kittane reports.

"If we deal with conflicts in a humane way with an objective to resolve them - the outcome could be great ideas that work towards healthy development. Else we would be stuck with conflicts fuelled by people who profit out of it. 35 years of conflict over river Cauvery leaves behind bitterness and frayed relationships", says Dr S Janakarajan, Professor at Madras Institute of Development Studies. It is the complete disregard by the state governments for such a humane approach and their vested interests in keeping the people alienated that might be at the root of the inability to arrive at a solution to the long-drawn Cauvery river water dispute between Karnataka and Tamil Nadu, he feels.

Janakarajan is the chief architect of the "Cauvery Family". an initiative that seeks to find an amicable solution to the stand-off over riparian rights in the Cauvery basin. It brings farmers and farmer representatives who are dependent on the river to dialogue. It has found through its experience that Multi Stakeholder's Dialogue (MSD), without politicising the issue, could actually result in a fair and acceptable distress sharing formula.

In his talk on February 15th at Bengaluru on "Inter-state water disputes: Judicial interventions and beyond - The Cauvery Family experience" organised by the research organisation ATREE, Professor Janakarajan discussed learnings that make it clear that farmers from both states have overcome misunderstandings to a significant extent on the Cauvery issue. The state governments themselves, unfortunately, refuse to leverage, or even attach importance to, MSD as a means of resolving the issue. (Atree is Ashoka Trust for Research in Ecology and the Environment) 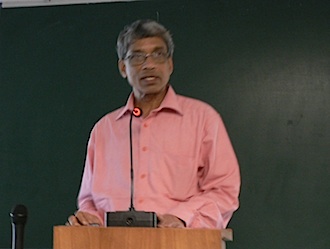 There are several facts that make the Cauvery dispute unique and particularly challenging, as several case studies have pointed out.

First, it is not a case of trying to reach an agreement on sharing a river that is as yet largely unused, but a case of re-sharing a heavily used river.

Some restrictions have been imposed by the tribunal to achieve reasonable quantities of water to be shared. Thus, neither of the states is allowed the practice of growing double crops in areas other than those prior to the 1924 agreement. There can be no further expansion of area under summer paddy crops. But so far, these restrictions have failed to yield any tangible outcomes.

The inception of Cauvery Family in 2003 involved a tour of the fields in Tamil Nadu and Karnataka for the farmers of both states where certain misapprehensions prevailed about Karnataka growing sugarcane in districts other Mandya and Tamil Nadu farmers growing three crops of paddy. The visit helped to clear these misconceptions. 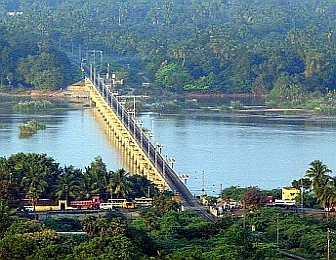 "The state governments refuse to acknowledge the existence of camaraderie among farmers from the states, purely with the ulterior motive of gaining votes at the cost of aggravating the issue," alleges Janakarajan. (Pic: The river at Tiruchirapalli. Source - Wikipedia)

Janakarajan recounts a particular incident that happened during the group's visit to Tamil Nadu that highlights the importance of farmer interactions in tense situations. He recalls the KRRS (Karnataka Rajya Raitha Sangha) leader K S Puttannaiah's reactions when an old lady took his hands and pleaded for some water. She showed him the dry farm and narrated their plight to him. Puttannaiah was in tears on seeing the pathetic condition of people in the delta and said that this was not the picture of the Cauvery delta that they had in their minds.

The Cauvery Family has met 19 times since 2003 - the most recent being in July 2011. The Family was due to meet on December 17th, 2012 but did not do so as a result of mounting tension over the issue in the states around this time. The family is now 22-member strong with 11 member representations from each of the states.

In the meetings so far, the Cauvery Family has arrived at two models for sharing water and they intend to present one final model. Janakarajan points out that a distress-sharing formula that CWDT lists in a table showing the quantity of monthly releases of water is not practical in crisis situations; however, if a dialogue can be arranged during these times then stakeholders can come up with a formula that takes into account ground realities at that point in time. And if the group is kept apolitical, as it is now, then it is possible that there is no violence and damage caused as a result of the issue.

There has been no tangible outcome of these meetings in that they are neither heard, nor is their advice sought for when rains fail and Cauvery is unable to meet the demands. "The state governments refuse to acknowledge the existence of such camaraderie among farmers from the contending states, purely with the ulterior motive of gaining votes at the cost of aggravating the issue," alleges Janakarajan. According to him, it is cheap politics that has given rise to and nurtured a bitter chauvinistic stance and mindset among the farmers of TN and Karnataka.

Janakarajan's experience with state governments has found the Karnataka government to be relatively more accessible; he has held discussions with erstwhile Chief Minister H D Devegowda. But DMK or AIADMK have never come forward for any discussion about the establishment of a Multi Stakeholder's Dialogue. Overall, neither of the states has been encouraging enough for MSD to gain momentum.

The refusal to recognize MSD as a potential means of arriving at a water sharing formula is both unfortunate and unwise, given the fact that judicial interventions have not helped in the matter. Janakarajan emphasises the legal impossibility of resolving an issue with a history of failure and the incapacity of the judiciary to handle the situation in recent times.

He questions the Supreme Court's wisdom in directing the chief ministers of the Karnataka and TN government to engage in a dialogue to resolve the issue, even after long drawn battles in the court.

The judicial pronouncements, in fact, make a mockery of the needs of the farmer. "The latest judicial pronouncement of releasing a meagre 2.44 TMC ft of water to TN - I do not know whom it would help - TN politicians, opposition parties in both states but certainly not farmers of Tamil Nadu and Karnataka and residents of Bangalore city," says Janakarajan, fearing that this may lead to further divide and mistrust amongst farmers.

Beyond rights, towards duties

More importantly, dialogue between multiple stakeholders could also be a forum for exchange of critical information about the well-being of the river itself - an issue that is being lost sight of in the fight over waters.

The stakeholders' meeting has seen a breakthrough in educating farmers about the river and the degrading effects of the demands over the river water - such as the fact that it is a deficit basin with claims for double the quantity of water it holds. Such dispute makes it easy for industries to grab farmers' lands leading to unchecked commercialisation and urbanisation. They also understand that the river is under severe stress for various ecological and environmental reasons, and the negotiators and bargainers should move ahead with long-term perspectives and an agenda of sustainable use of water.

"We could come up with a formula for water sharing that is applicable to local conditions through dialogues between people to whom the resource matters most, instead of relying on an international doctrine," claims a hopeful Janakarajan. "The rule of law is frustrating - with weak law enforcement and monitoring mechanisms," he says, thus justifying the need for a track II diplomacy in the case of the Cauvery river water sharing.

Shamala Kittane
21 February 2013
Shamala Kittane is a Bangalore-based writer. She reports for Citizen Matters and India Together.
HomeTop