The current situation of impotence that the Government finds itself in should prompt some soul searching about the reliance on market mechanisms to take care of India's food security, writes Kannan Kasturi.
20 January 2010 -

Food prices have become a major talking point for the media. The opposition parties too, it seems, have just woken up to defend the aam aadmi. Under mounting pressure, the Government has unveiled some short term measures to curb prices. The problem, however, is not short term in nature. A timeline of food prices of common food items serves as a reminder that the rapid food price inflation dates back two years, and even more in the case of certain items.

The price rise is variously blamed by the different government representatives on last year's drought, on "cost push" and on "dysfunction in distribution". The Government has been fairly candid in admitting its helplessness in combating the price rise. The Planning Commission Deputy Chairman has made public his belief that policy changes to make credit dearer are not a remedy. Imports without a government subsidy are also not possible as prices internationally are higher than in India. Action against hoarding and profiteering must be taken by state governments, says the Agriculture Minister, only to be roundly rebuffed and pointed out his errors of omission and commission.

Several questions arise. Why have prices risen? Are farmers benefiting from the rise? And why is the government so helpless?

In any discussion of food price rise, it is not long before one hears the word 'drought' - last year's drought is assumed naturally to be the main reason behind the price rise. The facts, however, say otherwise. The possibility of a drought became apparent barely five months back (July 2009) and its effects - a below average crop of paddy, pulses, potatoes (Kharif crop) and sugar - would only begin to be felt with lower arrivals in the market from October onwards. Last year's drought could account for the price rise over the last two months; prices however have been on the rise since the beginning of 2008. 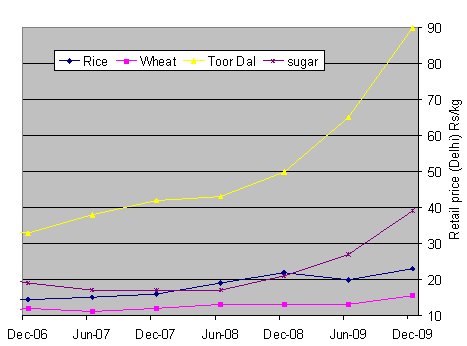 Time line of retail prices in Delhi for common food items. The data in the chart is from the Department of Consumer Affairs. However, other than government outlets such as the Kendriya Bhandar, grocers charge higher prices than these.

The case of rice is illuminating. Prices rose sharply in 2008 after record harvests in 2007 and indications of a higher production in 2008. Was the rise a "cost push" effect - due to the higher Minimum Support Price (MSP) for paddy fixed by the Government each year?

Comparing the rise in retail prices with the rise in the price paid to the farmer should provide some answers. The MSP announced as the price per quintal of paddy has been converted into an effective price per kg of rice using the standard assumption that paddy will yield 67 per cent by weight rice on milling for comparison. (For example, the MSP of Rs 950/quintal fixed by the government for paddy for the 2009-2010 translates to an effective remuneration of Rs 14.18/kg rice to the farmer.)

Comparison of retail price of rice (Delhi, end of the month, Government figures) with the MSP offered to the farmer. All prices shown in Rs/kg).

Of the additional Rs.7 that the customer in Delhi pays now compared to 2 years ago for 1 kg of rice (typically of the lowest quality, available from a government outlet), about Rs.3 goes to the farmer while Rs.4 is the increase in the markup of the retail price over the price paid to the farmer. The increased payments to the farmer in themselves would account for an increase of 9 per cent in rice prices each year over the last two years. The difference between the retail price and the price paid to the farmer - accounting for the cost of milling, storage, transportation, taxes and the commissions of the traders, wholesalers and retailers in the supply chain - has inflated by over 80 per cent in the last 2 years and by over 75 per cent in just 2008. What can account for this inflation?

Fuel prices rose sharply during 2008 but were back to their 2007 year-end levels by the end of 2008. The wholesale price index rose by only 6 per cent during 2008. The Government and its economists never came out with reasons behind this inflation. The likely explanation is that prices went up due to hoarding following the extraordinary increase in the international market price of rice in 2008, with the expectation that a killing would be made in exports. International rice prices more than doubled between Jan and May 2008 before settling down at higher than January levels towards the end of 2008.

About 10 million tones of rice were exported from India in 2007 and 2008 before the government banned exports in April, 2008. After coming down marginally in the middle of 2009, prices have again gone up on the "inflationary expectation" arising from last year's bad monsoon.

Sugar is another example of a problem that has been some time in the making. The Central Government declares a Statutory Minimum Price (SMP) for sugarcane every year to set expectations for the farmer (This has been renamed "Fair and Remunerative Price" after a recent amendment to the sugarcane law). Some States, including UP - the largest sugar producing state - declare a State Advisory Price (SAP) that sets a higher minimum for the price to be paid by mills for the sugarcane; others, like Karnataka, are content with the center's minimum price. The effective price realisation of the farmer is calculated with the standard assumption that a quintal of sugarcane will yield 9 kg sugar - thus the Rs.130/quintal price of sugarcane fixed by the UP Government translates to Rs 14.45/kg of sugar.

In 2007 the sugarcane production was in plenty and the millers were paying only the minimum prices set by the Government. Wanting to pay only the lower SMP set by the Central Government, millers even challenged the legality of the UP Government's higher SAP. The situation has undergone a sea change since then, after 2 years of severe shortfall in production and depleted stocks; millers in UP are paying a premium over the SAP to cane growers to prevent them from diverting their cane to khandsari units or selling to mills in neighboring states.

Here too, the figures show that despite being courted, the farmer gets the short end of the stick. Of the Rs.22 more that a customer now pays for 1 kg of sugar compared to 2 years ago, the farmer gets Rs.10.55 while the sugar mills, wholesalers and retailers together take Rs.11.45.

The current crisis of sugar availability is largely of the government's own making. It allowed the export of sugar on the back of record production in 2006-07 and 2007-08. Initially prices in the world market were higher than Indian prices and traders and exporters booked their profits. In 2007, the world market prices fell. The central government, however, continued to push exports by waving taxes and providing a subsidy to exporters. In the 3 years 2006 thru 2008, a total of over 9.5 million tones of sugar were exported. The average price realisation of these exports of raw sugar in the period after April 2007 was only Rs 11.76/kg!

This was not all. With a view to curb sugar production, the Government actually held the SMP for 2008-09 at the same level as the previous year even while the support price for food grains was raised. The non-remunerative price announced for 2008-09 pushed farmers to cut back on acreage of cane and sell their cane, when it was ready, to khandsari units who were offering a better price - all resulting in a severe fall in sugar production. Sugarcane production did not recover even in 2009-10 with acreage remaining below 2007 levels and the drought also taking its toll.

The government has been importing sugar for the last two years at roughly double the unit price of the earlier exports. Export when prices are low and import when the prices double - that is India's sugar story of the last 4 years.

Export when prices are low and import when the prices double - that is India's sugar story of the last 4 years.

Clearly, neither "cost push" nor drought really accounts for the food price inflation. The larger causes are the "dysfunction in distribution" and a government policy which is short sighted and makes no contingencies for the vagaries of nature. The "dysfunction in distribution", in plain speak, stands for speculative hoarding all along the supply chain from farm gate to consumer's table. And the government policy of exporting surplus agricultural produce without saving for the rainy day profits no one but traders.

It will now be clear why the Government is helpless. While cracking down on hoarding could bring some relief temporarily, it is a difficult option for the governments at the center and in the states, since the trading community is a major source of funds and has close connections with the political parties and politicians. For the Government's economic advisors, this is also anathema - it militates against the direction of reforms to free markets from all shackles. The preferred policy is to correct the markets through imports, but this will not work when international prices are higher or when the requirements are so large that the initiation of imports would drive up world market prices. Unfortunately, this is just the case now with pulses such as toor dal and with sugar.

The current situation of impotence that the Government finds itself in should prompt some soul searching among those who advocate that market mechanisms and free trade across borders will take care of India's food security. With bio-fuels competing with food for farming resources, it will become increasingly dangerous to rely on the international market to make up for large shortfalls in local production. It is perhaps time to rekindle the debate on the need for near self sufficiency in essential foods and investment in food storage infrastructure.

Kannan Kasturi is a researcher and writer on law, policy and governance.