Where the fight against extremism is far from over

The Karnataka government’s attempts to reintegrate Naxals into the mainstream through the provision of a surrender and rehabilitation package have met with only limited success. Akshatha M reports on the realities on the ground.
22 November 2014 -

The Home Ministry has been constantly asserting for some time now that the Naxal movement is losing ground in the state, but there have not been many instances of active Naxals accepting the rehabilitation package and surrendering before the government.

In a bid to attract more Naxals to lay down arms, the state government hiked the compensation amount this September and invited armed men and women to join the mainstream. But within a few days of expressing their desire to surrender, Zulfikar and Nagaraj, flayed the government’s compensation package in a letter addressed to Shanthigagi Nagarikara Vedike, an NGO headed by journalist Gowri Lankesh which has been trying to mediate between the government and Naxals.

They pointed out that a section of Naxals who wish to surrender do not expect money from the government, but rather demand that all cases against them – which they term ‘fake cases’ – be withdrawn.

The genesis of Naxalism

The roots of Naxalism in Karnataka the state go back far. When Cheeramma, an elderly woman was accidentally fired at during a Naxal training camp at her house in Menasinahadya, the incident sent shockwaves in the state revealing the mushrooming of the armed Naxal movement in Malnad in 2002.

In the following year, Naxals and police exchanged fire in Kudremukh. On 17 November 2003, the first police-Naxal encounter took place in Idu in which two alleged Naxals, Hajima and Parvathi were killed.

Menasinahadya, Megur and nearby villages that had a large number of Naxal sympathisers were the major hide-out spots for Maoists. Naxal leader Saketh Rajan, alias Prem, was killed in a police encounter in the forests of Menasinahadya in 2005. 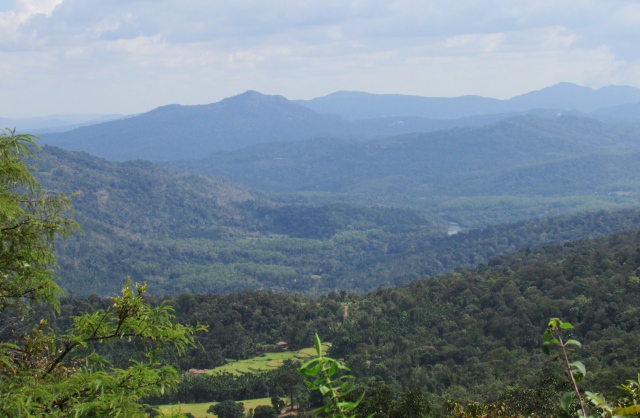 A panoramic view of Menasinahadya village located in the foothills of the Western Ghats in Chikmagalur district, considered the epicentre of the Naxal movement in Karnataka. Pic: Akshatha M

Gradually the movement began to spread to the neighbouring districts of Udupi, Dakshina Kannada and Shimoga. The frequent encounters and intensified combing operations appeared to halt the Naxal activities for the next few years.

The government’s attempt to bring Naxals back to the mainstream began with the Naxal surrender and rehabilitation policy introduced in 2010. The surrender package purported to provide livelihood and monetary aid to those Naxals who wished to surrender, but though welcomed initially, it has not succeeded in its objective.

It is alleged that the Naxal package is nothing but an eye wash. The list of those who have accepted the package and surrendered features hardly any hardcore Maoists. Of the compensation amount, half the money is said to be reaped by some local organisation leader who plays a mediatory role between the government and the Naxal.

The surrender and rehabilitation package has also not included acquiescence to the demand of the Naxals to have the cases against them dropped. Apart from the government's refusal to withdraw cases against them, hardships and adversities faced by surrendered and even alleged Naxals striving to lead normal lives have set a wrong example and been a deterrent in the process.

The mirage of a normal life

A case in point is that of Yashoda. Eleven years on, the dreadful night of the first Naxal-police encounter at Idu in Udupi district continues to haunt her.

Yashoda (32), who hails from Kalasa in Chikmagalur district, was an active member of the Kuduremukh National Park movement against the eviction of forest dwellers from KNP limits, which gained momentum in 2003.

The stage for the people’s movement had been set as early as 1997, when the government mooted the idea of notifying and declaring a portion of the Western Ghats as Kuduremukh National Park. The fear of eviction among tribal families who resided in the forests and earned their living through forest products, led to the creation of the Karnataka Vimochana Ranga which was later merged with Kudremukh National Park Virodhi Okkuta.

When Hajima and Parvathi, also part of the KNP movement, were killed in the police encounter of 17 November 2003, Yashoda survived by chance.

Survival, however, was little cause for celebration, as Yashoda now stared at a long legal battle ahead. She was arrested and underwent trial for eight long years, only to be acquitted by the Udupi District and Sessions Court in 2011.

During those eight years, police used to visit her house frequently, question her sister Kanyakumari and niece Savithri, and harass her family. Her sister and niece were so irked over the harassment that they abandoned the village forever and actually joined the Naxals. Savithri was barely 16 at the time.

“Police used to persistently question both the girls about their involvement in the movement which in fact made them join the movement eventually,” said Yashoda. Both the women are now in the police department’s wanted list of Naxals.

Even when Yashoda was acquitted by the lower court, she knew that it was temporary. With the public prosecutor approaching the High Court last year, Yashoda had to ready herself to fight yet another legal battle.

“After my arrest and acquittal, I was asked several times by the police to accept the surrender package. I denied it despite the lucrative offer, because it was a question of my dignity. Doesn’t my surrender prove that I was indeed a Naxal? Then my long fight would just lose its value,” she told this reporter, even as she requested the government to allow the surrendered Naxals and acquittals to live a peaceful life.

“The government should have the conviction of protecting the surrendered Naxals, when the latter accept the surrender package,” she said.

Hagalganchi Venkatesh from Koppa in Chikmagalur who was the first Naxal to surrender too echoed her view and said that his only demand from the police was to withdraw the cases against him. “There were three cases against me, but none of them were withdrawn. I fought them all in court and was acquitted a year ago,” he said.

There are also grievances over the way in which surrendered Naxals are harassed. “The police ask surrendered Naxals to submit all weapons. Isn’t it ridiculous? From where would we get the weapons to surrender?” asked a former Naxal, since acquitted, who did not wish to be named.

As discussion and debate over Naxal surrender and rehabilitation package rage on, Chikmagalur district on the fringes of Western Ghats, which was the epicentre of the Naxal movement in Karnataka, continues to mutely witness the continuing saga of extremism.

Villagers in Chikmagalur however feel that the Naxal movement has helped them to some extent in seeking the government’s attention. While the constant struggle from various quarters has prevented authorities from forcefully evicting rural families from the KNP range, those residing in the area strongly feel that the government has let them down and deprived them of their basic rights and amenities.

Vasanth (name changed), a villager from Koppa says that had it not been for the Naxal movement, the villages in Malnad region would have been deprived of basic facilities even to this day.

“Ten years ago, villages in Kalasa and Mudigere had no road connectivity, electricity, schools or other basic amenities. Today, I will not say that we have all facilities, but our problems have been addressed to a certain extent, thanks to the Naxal movement,” he says, while adding that the movement has also brought misery to the lives of villagers.

“We are sandwiched between Naxals and the Anti-Naxal Force (ANF). We are under constant surveillance by both the parties. Villagers, too, have lost their lives in the hands of Naxals, while ANF personnel continue to harass us,” Vasanth notes.

The unrest in the area does not appear to be close to an end just as yet. If the ANF Intelligence source information is to be believed, the government’s decision to implement the Kasturirangan report and other projects that would again create a fear of eviction among the villagers could potentially provide an opportunity for the red brigade to venture into Malnad region yet again and make fresh recruitments.

Akshatha M is a freelance journalist based in Mangalore.