A new course for iron ore mining in Odisha

Rejection of regularisation of mines operating beyond lease areas and compensation for other violations being used for tribal welfare are among the recommendations of a recent report on mining in the state. Kanchi Kohli places the key points in context.
27 October 2014 -

The discourse around iron and steel in India has taken a huge political turn since 2007. In 2007, the Karnataka state government, while recognising the problem of rampant illegal mining in the state in the light of steep increases in iron and steel prices had sought the intervention of the Lokayukta.

An interim report of the Karnataka Lokayukta was put out in December 2008,  which highlighted several instances where mining activity was taking place beyond the leased area. This included trespassing into forest areas, illegal dumping and other violations linked to the parameters set out by the Indian Bureau of Mines (IBM) as well as environment and forest regulations. The Lokyukta’s final report in 2011 found incriminating evidence of illegality in the sector from 2003 onwards.

Even as this process was ongoing, the Ministry of Mines set up the M.B. Shah Commission in November 2010. Though the final report of the Commission came in October 2013, their interim reports brought out evidence on instances of massive corruption and illegalities prevalent in the iron ore and manganese sector that shook the established methods of corruption and circumventing of law.

One critical emphasis of the Shah Commission report was on conservation, preservation and systematic development of minerals, approaching these aspects through the clauses of the Mines and Minerals (Development and Regulation) Act, 1957 (MMDRA). In their broad interpretation, conservation in the context of Section 18 of the Act would mean "preservation; careful and planned management of natural resources and to protect from harm or overuse of minerals."

This backdrop is important to locate the developments that are being discussed in the present article, which deals with the report of the Central Empowered Committee (CEC) of the Supreme Court dated 17 October 2014, submitted before the court.

The report lays out clear recommendations on ten specific aspects where there have been violation of environment and forest clearance norms, evidence of mining activity having taken place outside sanctioned mine lease areas, as well as illegalities related to specific clauses of mining-related laws and rules.  The recommendations pertain to the frame of payment of compensation, funds to be set up for tribal welfare and area development, and the rejection of possibility of regularisation of operational mines in certain instances.

Cases leading to the CEC report

The latest CEC report relating to iron ore and manganese in the state of Odisha draws its mandate from a few ongoing cases in the Supreme Court (SC).

The most prominent of these has been the writ petition filed by Common Cause, a registered NGO which has taken a lead in filing several public interest litigations (PILs), addressing issues such as criminalisation of politics, coal block allocation irregularities and many others.

In W.P. (C) No. 114/2014, relating to illegalities in iron ore and manganese mining in Odisha, Common Cause sought a range of reliefs and orders from the SC. This includes directing the central government and the Odisha government to immediately stop any illegal mining in the state and terminating all leases found to be in violation of the Forest (Conservation) Act, 1980 (under which the permission for diversion of forest land for non-forest use such as mining needs to be sought) and other environmental laws.

It also draws from the report of the M.B. Shah commission and asks for directions to be taken against violators listed in the five-volume (including sub volumes) report on mining in Odisha. 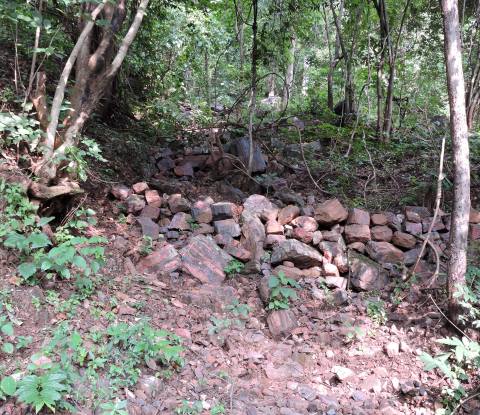 A forest patch with iron ore, waiting to be extracted. Pic: Kanchi Kohli

Amongst other things, the PIL asks for a thorough investigation by a Special Investigation Team (SIT) or the Central Bureau of Investigation (CBI), especially into the collusion between private agencies/individuals and government officials. Another prayer in the petition seeks directions on conducting macro environment impact assessments (macro EIA) and identification of ecologically sensitive areas (ESAs) where no mining should be allowed.

While the Common Cause petition talks about recovering money and launching prosecutions under the MMDRA, 1957, it also seeks for restoration and re-vegetation of the mined area in accordance with India’s National Forest Policy, 1988.  Then, there is the call for a detailed report by the Central Empowered Committee (CEC) on the “facts stated in the instant petition, the reports submitted by Justice Shah Commission and other documents on the illegal mining and impact of mining in State of Odisha.”

These cases also sought enquiries based on the Shah commission findings and demanded that illegal mining be stopped while action be taken against those involved in the illegalities, including government officials. Other than these, there have been cases which relate to irregularities by specific mine lease holders.

Following the SC’s directions on 21 April 2014, the CEC had been asked to prepare a list of mining lease holders in Odisha who had violated law. This direction was associated with all of the abovementioned writ petitions and intervention applications.

The CEC found that 102 mine lease holders don’t have statutory approvals and the state government had suspended mining activity. 29 leases had been rejected or had lapsed while 53 mines were operational. In addition, a list of three mining leases operating on non-forest land was also appended to the report.

In an order dated 16 May 2014, related to the Common Cause petition, the SC had directed that mining operations under the 102 and 29 mining leases referred to earlier would remain suspended. As and when approvals are received, they could approach the court for modification of orders. 30 leases were allowed to continue mining.

26 leases, which were operating on the basis of “deemed approval” as per Rule 24 A (6) of the Mineral (Concessions) Rules, 1960 were also not to be allowed, unless fresh orders were issued under the requisite clauses of the MMRDA, 1957. The CEC was to submit its report by July 2014, but was able to do so only in the month of October.

The CEC report states that several meetings were carried out with the Odisha Chief Secretary, senior officials of the Odisha government and mine lease owners, including a site visit to the Sharda mines. There is another category of people – labelled “others” – with whom the committee spoke. One cannot presume however, that these include forest dwelling communities or mine labourers who have been impacted by the illegality and encroachments.

The report does not also explicitly mention any conversations with district and block level authorities including the forest department who have an important task of regulating these mines.

10 kinds of issues have been identified in the report, based on the background of the case, issues raised during the course of the hearing and meetings and requirements put forth by the SC.  They include production of iron ore without requisite clearances, encroachment into forest land and outside approved mine lease area, requirements of the MMRDA and Mineral Concession Rules.

In this article however we deal with the CEC’s observations and recommendations related to three broad issues. These relate to violations in the form of forest diversions, approvals under environment and pollution laws, and mining outside sanctioned lease area, which are all interlinked and are discussed below.

Thefirst issue discussed in detail relates to the production of iron ore and manganese ore without, or in excess of, the approved environmental clearance (under EIA Notification, 2006), Mining Plan and Consent to Operate (under pollution laws).

The CEC’s report quotes extensively from the clauses and circular related to the EIA notification, 2006 (environment clearance) and the MMRDA, 1967. It highlights the punishments available in these laws in case of illegalities.

The report observes that practically all the lease holders for iron ore or manganese mining in Odisha were operating their mines either without environment clearance or in excess of what had been approved. In fact it is the Odisha Mining Corporation (OMC), a Government of Odisha undertaking, that is the most significant violator with many known companies including Tata Steel, Steel Authority of India Limited (SAIL) also in the list.

Ironically, despite these illegalities, transit permits were issued for the transportation of the ore. The government of Odisha has only started taking steps to regulate and sort out the illegalities since 2011-12.

The recommendations of the CEC do not immediately lead to closure of these mines or revocation of approvals, if the violations are linked with environment and pollution clearances.  It suggests that directions be issued for 30 per cent of the notional value of the iron and manganese produced by each lessee to be recovered. This compensation has to be paid within three months and till such time, the leases will remain suspended. The notional value is calculated based on year-wise prices of iron and manganese ore.

However, this would not come in the way of action under the provisions of the respective legislations under which violations have taken place, including the environment and forest laws.

These recommendations do not apply to the mines where there is also a violation of the Forest Conservation Act, 1980 and MMRDA and Mineral Concession Rules, which the CEC gets into detail later in its report. Some of this is discussed below.

It also suggests that the money deposited for tribal welfare works be released from the Adhoc Compensatory Afforestation Management and Planning Authority (CAMPA) to the Special Purpose Vehicle (SPV) set up to implement the scheme, which had been developed and approved for “specific tribal welfare and area development works so as to ensure inclusive growth of the mineral bearing areas” through previous recommendations of the CEC and directions of the SC.

The Shah commission report had listed 51 mining leases, which were operating in violation of the FCA. The CEC report highlights that senior forest officials have taken a position that in instances where the MoEFCC has agreed to the retrospective grant of forest clearances under FCA, and where penal compensatory afforestation has taken place, the projects should not be considered as violators. This position has not been accepted by the CEC, especially because there are no explicit orders either condoning or regularising the violation in any of these instances.

In case such lands are also outside the sanctioned mine lease areas, the recommendations presented in the next section will apply too, and are hence important.

No regularisation for mining outside sanctioned lease area

This compensation is to be recovered for all illegal mine leases and will be deposited in the Special Purpose Vehicle (SPV) set up for tribal welfare and area development.

These areas are to be rehabilitated as per the Relief and Rehabilitation (R&R) plan approved by the Odisha state government irrespective of the nature of the land. The CEC report clearly states that areas where illegal mining has been carried out should not be regularised by either a grant of a mining lease or through approvals under the Forest Conservation Act (FCA), 1980.

The content of all these legal cases in the highest judiciary and the recommendations of an expert monitoring agency like the CEC, will have a huge bearing on what is decided for iron and manganese mining in Odisha. Its implications are deep – especially for the mining-affected communities, workers and citizens of small mining towns who lead their lives in the face of harsh realities due to continuous extraction and transportation of ore.

The author is an independent researcher and writer.