The decision of the Censor Board to ban screening of Bengali director Suman Mukhopadhyay's film Kangal Malsat is only the most recent instance in a long history of political interference in free creative expression in this country. Shoma Chatterji reports.

“Censorship, legal and extra-legal, is a serious inroad on freedom of expression. Censorship is highly subjective and essentially mindless. The main motivation for censorship is intolerance. Conventional wisdom and official ideology cannot be allowed to be questioned and criticized and must be suppressed. Portrayal of historical events that depict a government or certain persons or groups in an unfavourable light cannot be tolerated and should therefore be suppressed by recourse to censorship.” This is a comment picked from an article by Soli Sorabjee in the Indian Express (January 30, 2007) following the non-screening of Parzania in Gujarat. The film was rejected by multiplex owners in Gujarat for fear of a Hindu backlash.

But Parzania is just a drop in the huge ocean of the politicization of the Censor Board, be it in Mumbai, Gujarat or West Bengal. The Calcutta regional office of the Central Board of Film Certification (CBFC) held back the certification of a Bengali film, Hatath Neerar Jonnye (Suddenly, for Neera) that was slated for public release in around 15 theatres of West Bengal on July 9, 2004. The viewing panel referred it to Anupam Kher, then-Chairperson, CBFC, stating that it felt the film is “detrimental to Bengali culture and sensibility because it explores an extramarital relationship.” Anupam Kher upheld the decision of the regional office. He had not seen the film but accused the producers of fixing the release date even before obtaining a clearance certificate from the censors. As per rules, Kher referred the film to the review committee.

The CBFC is not the supreme authority. Its decision is often over-ruled by the administrative head of a given state including the centre. So, censored films are also stopped after they have obtained the certificate granting them the right to show their film in the theatres.

Take the example of Mrinal Sen’s Baishey Shravan. “In October 1960, I received a note marked ‘Immediate’ from the I & B Ministry. Baishey Sravan was partly based on the Bengal famine of 1943. It had been invited to the London Film Festival. The ministry thought it would be in the fitness of things to remove all shots showing the protagonist, an incorrigible villager, using his fingers while eating. For this would, for sure, nauseate the sophisticated audience abroad. When I refused, the ministry stopped negotiating with me. I sent the print directly to the festival. Subsequently, I informed the ministry that nobody had felt sick during the screening. There was no nausea,” he laughs. 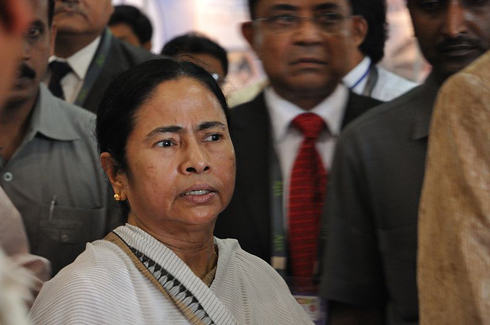 It would be interesting to explore the recent case of the Censor Board’s refusal to grant a certificate to Suman Mukhopadhyay’s new film Kangal Malsat (War Cry of the Poor). Interestingly, till not very long ago, Mukhopadhyay was a staunch supporter of the Trinamool Congress and went into persistent and vehement debates on television and the print media about why the state needed change at the ministerial level. Of late however, he seems to have changed his stance and is talking against the party in power and all that it stands for. The same applies to several cultural intellectuals of the State – from Koushik Sen to Mahasweta Devi – who backed Trinamool and helped it come to power but have since been openly critical of the new government.

Who is Suman Mukhopadhyay and what is Kangal Malsat all about? Suman Mukhopadhyay is one of the most outstanding young theatre practitioners in Bengali theatre. He is also a remarkable filmmaker whose first film Herbert, won the National Award for the First Feature Film of a New Director. He later made an abstract experimental feature Mahanagar@Kolkata and Chaturanga based on Rabindranath Tagore’s work.

Both Herbert and Kangal Malshat have been authored by Nabarun Bhattacharya who is considered to be one of the most incisive young writers who mercilessly opens the innards of inequity in society to expose the inhuman conditions the marginalised, the oppressed and the humiliated live in without any soft-cushioning in language and style. He is outstanding within contemporary Bengali literature. Mukhopadhyay had presented a theatrical version of the same story in 2006 when the earlier Left-ruled government was still in power.  So what made Mukhopadhyay decide to make a film on the story with Kabir Suman, an estranged Trinamool MP, playing Dandabayas, the primordial talking crow?

“I decided to make a film version because Bengal has seen many changes since 2006 and I had to incorporate changes in keeping with the changing times and ambience.  The time is just right to make a film on the novel. The scornful burlesque prompted me to turn Kangal Malshat into a film. There is a certain rawness that had me hooked.

In the novel, the Fyatarus (flying human beings) and Choktars (the black magic sect) wage a war against the Left Front government,” says Mukhopadhyay, adding, “The novel was written in 2003, before Left Front lost power, but Mukhopadhyay has incorporated the changes in the script. “It is a historical situation and I really wish to document the chaos that ruled the state during the later stages of Left reign. The stage version ended in anticipation. But in the film version, I have taken it ahead. The film will show the change in power. There was a spirit of agitation in the play. The film too will incorporate this,” he informed before this controversy was born.

He must have had a change of mind because the above statement about ‘change of power’ according to the Censors, does not speak positively about the party in power. What does the letter from the Censors to the producers of the film say in support of their refusal? The letter puts forth several arguments as follows:

Alleging 'political discrimination' by the government, Mukhopadhyay has moved the Film Certification Appellate Tribunal challenging the Censor Board's decision. "As a filmmaker I made a film which I wanted to. Now if it has some political undercurrents it doesn't mean those in power have the power to ban the film. They are trying to gag us," he said.

•  Whose films are these, anyway?
•  A medium in chains

Not having been given the opportunity to see the film, there is no way one can see through the truth of these arguments. Cinema being a fluid, multi-layered medium of creative expression, responses are very subjective and prone to varied interpretations. But the fact remains that political interference goes against the constitutional right to an individual’s freedom of expression, with or without the Censor Board.

Alleging 'political discrimination' by the government, Mukhopadhyay has moved the Film Certification Appellate Tribunal challenging the Censor Board's decision. “As a filmmaker I made a film which I wanted to. Now if it has some political undercurrents it doesn't mean those in power have the power to ban the film. They are trying to gag us,” he said.

The film was denied release based on recommendations by a revising committee of the Censor Board, whose members are appointed by the state government. Filmmaker Haranath Chakraborty, one of the key members of Mamata Banerjee's cultural think-tank group, leads the committee.

Film journalist Mohan Deep who was with the CBFC for two years says, “Censorship is one way of safeguarding power. It is a part of license, quota and permit Raj. The purpose is the same as it is for imposing income tax, bestowing awards, concessions, grants, endowments, red-tape control. The idea is to let the world know who wields the whip.  I have heard of instances where money has changed hands for beating the guidelines or clout being used for the same reason. Filmmakers who support censorship play into the hands of politicians. They are acknowledging and recognizing the right of others to sit on judgement of their work and to dictate the do’s and don’ts in a democracy.”

In 2006, under the direction of the BJP’s State Youth Wing, the Gujarat Multiplex Owners’ Association refused to screen the Aamir Khan-starrer Fanaa as its own way to avenge the actor who had voiced his support for the people displaced by Gujarat’s Narmada dam project. This is tantamount to censoring a person’s individual statements by virtue of his celebrity status that gives him high visibility. How can anyone’s personal support for X cause be linked to the person’s professional work? What kind of avenging action is this? This action had a strong negative impact on the revenues of the film in the week of its release. The irony is that this had nothing to do with the form and content of Fanaa in any way. This expressed a single group exercising its freedom of expression to obstruct and object to someone else’s freedom of expression.

Filmmaker Gautam Ghose talks about a number of his projects that were in a spot for dealing with sensitive political topics such as his first film Maa Bhoomi (1979) which dealt with the Telangana uprising. He had to handle a cast of hundreds of real peasants. It was a challenging task accomplished with competence by a first-time filmmaker. It got an overwhelming response in Andhra Pradesh. But initially, there were protests against the film that delayed its release. Ghose’s Antarjali Jatra (1987) based on a story by Kamal Kumar Majumdar faced trouble because it dealt with the evil practice of sati and the film was fresh after the Roop Kanwar case in Rajasthan. “Intellectuals like Satyajit Ray fought on my behalf and the film was finally cleared by the censors,” Ghose recalls.

One continues to be intrigued by how the CBFC was turned into a joke consisting of a panel of jokers, by political powers-that-be in Delhi who often over-ruled a refusal or an “A” certificate just through a simple telephone call. N.S. Thapa was Regional Officer at the CBFC’s Mumbai office between 1972 and 1976. When the Sholay case came up, the examining committee found it too violent and decided to grant it an “A” certificate with cuts.

“Even before I reached the office, G.P. Sippy’s man was there asking for a withdrawal of the application,” recalls Thapa. “Next day, a top politician called to tell us to pass the film without referring it to the revising committee. We did not fight back because Virendra Vyas, who was then-Chairman of the CBFC, was a heart patient. I was shocked by the political interference in the work of the Board and returned to my original post at FD,” he sums up.

Shyam Benegal has been a strong backer for the abolition of censorship. At the same time he stresses that there has to be some kind of regulation in India. “I am against censorship and do not believe that it works and will work in the future. But I do believe that some kind of regulation is necessary in a country as diverse as India, though we do not need a system where the government has something to do with all this," he says. In effect, he advocates a self-regulatory body, just as his peer  Govind Nihalani does. “I am personally against censorship. I prefer a rating system, giving responsibility to filmmakers," Nihalani says, echoing Benegal. He adds, “A censor policy should be so that it can evolve with time, as values, thinking and society change.”

The question is, have values really changed? Have society and our ways of looking at films changed? Think about these. Advertising guru Alyque Padamsee has the last word. “Your eyes are the best censors. In this human ambience, who needs censorship?”