As Census Commissioner Jayant Kumar Banthia released data on religious communities in the country on September 6, the first to react were BJPs president Venkiah Naidu and RSS spokesman Ram Madhav who found a demographic time bomb ticking around. The imagery of time bomb was deliberate, and they warned the sharp increase in Muslim population growth rate, as reported by the census data, was quite dangerous for the countrys future.

Only, they were a bit premature in their reactions because Banthia, who was elevated to this critical job by the NDA Government, was pulling a fast one on them as well as the country. He was playing with figures and now the Home Ministry is inquiring about how the faux paus on Census data release on religions came to be despite serious differences within the Government on the advisability of such a move.

What made Naidu and Madhav see red was the statement in the first page of the analysis on Religion Data, which said that among the six major religious communities, the decadal growth of the Muslims was the highest (36.0 percent) at the 2001 Census. The analysis also said the growth rate of the Hindu population had come down from 25.1 per cent in 1981-1991 to 20.4 per cent in 1991-2001.

But the problem with this analysis was the fact that the data for the Muslim growth rate did not take into consideration the fact that the population of Jammu & Kashmir, a state with 67 per cent Muslim population, was not included in the 1991 Census as the census operations could not be carried out there owing to extremist violence. This critical information is revealed as a footnote on a later page which says that no census was conducted in Assam in 1981 and in Jammu & Kashmir in 1991.

Still, the Census Commissioner made this observation about the decadal growth in Muslim population, which was carried by the governments own media organizations as the I&B Ministrys Press Information Bureau highlighted this point in its press release on the census findings.

It must be noted here that though data on religions were not being published by the Census Commissioner in the post Independence period, collection and tabulation was ongoing. The Commissioner, in his introductory note, says that he was taking the bold step of releasing data on religions as the National Minority Commission and Central Statistical Organization asked for such data; alongside the Commissioner acknowledged that some experts had expressed reservations on the release of such sensitive data.

Minus the numbers on religion, Census data was released a month ago, on the eve of the World Population Day. The data gives disturbing evidence on the demographic changes taking place in the country. India is now a country of more than 102.8 crore people, the second largest populated in the world after China, and what is more, we will cross the Chinese record within another 30 years. Surely this will be an unenviable achievement.

In Punjab, Haryana, Gujarat and Himachal Pradesh there are now less than 800 girls for every 1000 boys.

It is not that India totally failed in its population control programmes in the past decades. There have been immense efforts to bring the population growth rates down, and there is a clear indication that the efforts did bear fruit too. However, China with its one-child policy and repressive government machinery has been more successful and its rate of growth of population is much smaller compared to that in India. Hence by 2035, India is all set to replace China as the most populous country on the earth. It will be a severe test for policy makers and planners as the pressures on resources with a teeming population clamouring for basic necessities may become a nightmare.

But the numbers also tell us that in the past decade, that is 1991-2001, India had had the best results in population control measures since Independence. The growth rate in the past decade was lower by 2.3 percentage points compared to the previous decade. The growth rate, which had been 23.9 in 1981-91 fell to 21.5 in the period from 1991 to 2001.

The worst performer in the mater of population control is Bihar and this brings us to the problem of poverty and demographic patterns. Bihar remains one of the most economically backward states and its literacy figures too remain abysmally low. But in the matter of population growth, it tops the chart. The saddest part of the story is that its performance has been declining as its population growth rate which was 23.4 percent in the decade from 1981-91 actually registered a rise to 28.6 per cent in the period 1991-2001.

Bihar is proving to be a classic case of misrule and wrong priorities in social sector, going by every indicator of human development index available in the census data. Its performance in literacy status also gives the same dismal picture, as the state recorded the lowest literacy rate in the country. Its literacy rate of 47 per cent is much below the national average of 64.8 per cent. In the matter of female literacy too, it lags behind all other states.

In contrast, the impressive performance of Kerala and some other South Indian states in the matter of population control and literacy levels takes us to the question of public policy on vital issues of social life. It appears that while most of the Indian states were taking some conscious steps in the direction of improving their human development indicators, Bihar and some other northern states like Jharkhand (part of Bihar during most the past decade) were unconcerned about such matters.

Keralas population growth rate is the lowest at just 9.43 per cent. Its neighbours, Tamilnadu and Andhra Pradesh follow, with 11.72 and 14.59 percents respectively. In fact Andhra had the record fall in population growth rate, registering a fall of about ten percentage points in the decade.

Sex ratio is another clear indicator of an enlightened social life. On the national level, there has been an improvement, albeit a barely satisfactory improvement. India had 933 females for every 1000 males in the 2001 census; a slight improvement from the ratio of 927 in the 1991 census. But in Kerala, which has the highest sex ratio, there were 1058 females for every 1000 males. Pondicherry which holds the second position has 1001 females.

In literacy, Kerala is leading the pack with 90.9 per cent literacy maintaining its 1991 ranking. The national performance too was encouraging, recording a jump of 14.6 percentage points from 1991s 52.2 percent to 64.8 in 2001. Most of the states recorded good growth in literacy levels, leaving Bihar the only spectacular failure. Today, Bihar is the only state in the country whose literacy level remains below 50 percent. In female literacy too, Bihar is at the bottom. It has replaced Rajasthan.

Keralas good show ends with its social sector achievements. When it comes to economic performance as reflected in the census data, the state is the real laggard. Take employment: the percentage of working people in the total population (or the work participation rate, WPR) was just 32.3%, at the bottom of the scale.

At the national level, the WPR did show an increase indicating that more people were able to find employment, either part time or full time, in the past decade. The WPR was 37.5% in 1991 and it grew marginally to 39.1% after a decade, showing a sluggish economy and poor growth in the past decade. 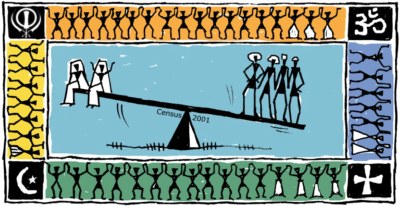 The greatest revelation (some would say confirmation) of the census data is about the missing girl child. The document itself describes this as the most alarming fact emerging out of the Census 2001. It found that the child sex ratio in the 0-6 age group has been steadily declining in the country and the greatest culprits are states like Punjab, Haryana, Gujarat and Himachal Pradesh who fell below the less-than-800 girls for 1000 boys mark. The number of girls per 1000 boys in this age group fell from 945 in 91 to 927 at the national level, showing an alarming decrease of 18 points in just one decade.

It is a clear case of unchecked female infanticide, despite legal restrictions. This situation is cause for concern for our entire society. But economic causes are at the root of this phenomenon and with a poor economy and the burdens of dowry on the parents, more and more Indian girls are simply going missing from the womb.