While the LDF government was quick to ban colas in Kerala, it mounted only a mild defense when this was challenged in court by the manufacturers of the drinks. Ignoring evidence of groundwater depletion and contamination, it argued only that the drinks were unsafe for consumption. M Suchitra and P N Venugopal report.
03 October 2006 -

The Kerala High Courts order of 22 September quashing the ban imposed by the state government on production and sales of Coca Cola and Pepsi, did not come as a surprise even to ardent supporters of the ban. The Left Democratic Front government had seized the first opportunity after coming to power and imposed the ban - a confirmation of the stand taken by the left parties in the Plachimada agitation against Coca Cola. But the division bench, comprising of Chief Justice VK Bali and M Ramachandran, held that the powers to do so under the Prevention of Food Adulteration Act were vested with the Central Government, and not the state. The court also observed that the ban cannot be justified since it was based solely on a report by an NGO, the Centre for Science and Environment (CSE), New Delhi, which had revealed the presence of pesticides and harmful chemicals in Coca Cola and Pepsi.

The government isn't conceding yet; Chief Minister V S Achutanandan termed the court verdict unfortunate, and the state law minister M Vijayakumar said that the government will move the Supreme Court to make its case. But to those who keenly observe developments on the cola front, this is ringing hollow; to them it was evident all along that the ban would not stand legal scrutiny.

"If the government is so much concerned about the pesticides in a 375 ml bottle, how can they ignore the contamination in millions of litres of drinking water in Plachimada?"

Why? Because the government did not use the full range of arguments available to it. Many hailed the ban as a victory for the Plachimada agitation, and a section of the Plachimada Coca Cola Virudha Samara Samithi withdrew from the agitation, but there was no reference to Plachimada at all in any of the statements made by the government in connection with the ban either in the court or outside. Nor was any reference made to several earlier reports and studies: the Kerala State Pollution Control Board (PCB) had reported that water bodies at Plachimada have been polluted; the BBC had noted the presence of cadmium and other chemicals in the sludge thrown out by the company; and the Central Ground Water Department (CGWD) had pointed to depletion of groundwater. The government also did not bring up a 2006 report by the Kerala Groundwater Department, which studied the pollution and depletion from 2003, and confirmed that the quality of groundwater had deteriorated.

Were these findings unrelated to the ban? Appratently so. Industries minister Elamaram Kareem declared that the government had imposed the ban on 'medical grounds' only, and not owing to any industrial issues. It's no surprise, then, that the Court struck down the ban, since the safety of food and beverages is the Centre's jurisdiction.

Why is the LDF keen to confine the legal arguments to medical issues, when clearly there are other considerations? The party isn't saying, but it is not to be forgotten that it was the previous LDF government which, in 1999, welcomed the Coke factory to Plachimada. Making political capital out of the CSE report but turning a blind eye to the core issues may have given the party an opportunity to appear energetic in its opposition to the bottling plants, but also quietly backtrack in court. The divergence between public posturing and the stance taken in court hasn't gone unnoticed. Robin, a member of the Plachimada Pathana Samithy asks, "If the government is so much concerned about the pesticides in a 375 ml bottle, how can they ignore the contamination in millions of litres of drinking water in Plachimada?"

Whether or not the ban finally stays, the agitation in front of the factory gate is continuing. Local opposition to excessive extraction of groundwater by Coca Cola, as well as the contamination of soil and water resources, has remained strong since the struggle began in April 2002. "Our problems have not been solved," says Kaliamma, one of the several tribal women squatting in the temporary 'agitation tent'.

The Coca Cola factory in Plachimada has remained closed for the last two years. The local panchayat (Perumatty) isn't pressing for its case in the Supreme Court to be listed for hearing; its legal advisor, K Ramkumar, notes that as long as the conditions imposed by the panchayat are not fulfilled, the plant cannot reopen. But water remains a problem; with its groundwater still polluted, Plachimada now gets its drinking water through pipes that provide water for a few hours once in two days, and through tanker lorries which also arrive once in two days. Fifteen tanker-lorries of water are supplied by the government, and 15 more by the company. But locals aren't satisfied with simply closing the plant; they want justice for the damage caused to health and the environment. "It's true that the company is not functioning, but that is not enough. We must get compensation for all the crimes committed by the company," says Vilayodi. 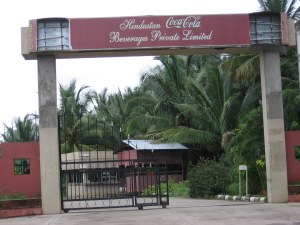 Picture: Is the gate half-open or half-closed for bottling plants in Kerala?.

Even those who have withdrawn from the agitation following the state's ban emphasise the need for compensation. CCVSS convenor Veloor Swaminathan says that he has full faith in the LDF government. "While in the opposition, they were with us supporting our cause. Now that they are in power, they have the responsibility to take all legal and legislative measures. If the government fails, we will join the direct action [again]." He may be forced to make good on his threat, if the government does not expand its arguments when the case reaches the Supreme Court.

Plachimada is not the cause of Adivasis alone, he vehemently argues. It is an issue not even confined to Kerala. The right to clean water is a global issue. Should the Adivasis alone bear the brunt and the opportunity cost, he asks. The agitation is taking its toll financially too. Vilayodi Venugopal says that the Committee now has a debt of 150,000 rupees. Mylamma, the adivasi woman who emerged as the spearhead of the anti-cola agitation, says that she spent almost the entire money she received as awards from various organisations (in recognition of her contribution towards the struggle) for settling the debts of the Committee. "My house is under threat of attachment for not repaying two loans I have taken, one for construction of the house and the other for rearing of goats," she says. "I had 20 [goats] to begin with, now there are only seven left as I could not look after them due to the agitation." Her fate is a reminder of the difficulties that direct victims face when they alone are left to fight such battles.

"The task before the government is quite clear cut," says Brahmaputran, of the Plachimada Pathana Samithy. He wants loopholes in laws that govern the environment, water resources, and health to be plugged, and more importantly, he wants decisions that affect local communities in a big way to be made by them, not in the state capital or in New Delhi. "Bring in legislation, so that Plachimadas are not repeated. Amend the Panchayatee Raj Act, so that the people of a locality acquire the power for self-determination; and control of the available resources [passes] to the local community," he demands. (The Quest Features & Footage)