The functioning of the smart-card driven CORE-PDS system demonstrates the feasibility of introducing portability in social security systems without the use of biometrics. A student team from IIT Delhi surveys Fair Price Shops in Raipur district following the new system to assess how it has been faring.
15 September 2014 -

Portability has become a buzzword in recent debates on social security benefits. The idea is to create a system wherein beneficiaries of a programme are able to avail their entitlements (subsidised food, or NREGA wages or old age pensions), irrespective of their place of residence. Since a large number of social security beneficiaries are poor migrants, portability can lead to significant convenience.

In 2012, the Government of Chhattisgarh introduced the Centralised Online Real-Time Electronic (CORE) Public Distribution System (PDS) in the state with a similar objective.

For one, people often complained about the time taken to make their PDS purchase. For instance, in a nine-state survey of the PDS in 2011, 45 per cent of the respondents had reported that their last trip to the FPS shop took more than two hours. In extreme cases it could entail taking trips on successive days.

Secondly, since the FPS dealer (including the managers who run the shops in many cases) had a virtual monopoly in the area, he or she would misbehave or abuse ration card holders, and threaten to close the shop.

There were also reports of diversion of PDS grains to the open market, with fake entries in official records.

With the introduction of CORE-PDS, ration cardholders were provided with a smartcard along with their paper ration card. An Electronic Point of Sale (E-POS) machine has been installed at each FPS. The smartcard stores the details of the beneficiary, their family and their monthly entitlements. The E-POS machine is connected to a server (at the National Informatics Centre), where all the records are stored.

The smartcard has to be inserted into the E-POS machine, in the same way as in an automatic teller machine (ATM); the machine reads the card, fetches the data from the server, verifies the data, and displays the monthly entitlements of the beneficiary on the machine. Each time a purchase is made, apart from updating the record on the server, it is also recorded on the smartcard. (See this video.)

This enables the system to function in an offline mode also: even in situations when there is no connectivity, the E-POS machine can still get information on the last purchase. Every beneficiary continues, however, to be tied to a “home FPS” so that she can get her quota of ration even in the event of loss of the smartcard.

At the back-end, food grain stocks are tracked at each FPS. Whenever the stock in any FPS falls below half of what was ordered at the time of the last delivery, the FPS dealer is sent a message on his/her mobile. The shopkeeper can then place a fresh order with the food department, and the delivery is made before the remaining half is distributed.

A direct implication of such portability for FPS dealers is that there is no fixed commission for them, as there may not be a fixed base of ration card holders who purchase from him/her. The shopkeeper has an added incentive to behave properly with ration card holders, or they would just migrate to the nearest alternative FPS.

Another implication could be that the FPS will have to be open for more days, to maximize profits. Overall, portability provided by the CORE-PDS has the potential to automatically weed out bad or inefficient Fair Price Shops.

How smart is the system?

To study the new system, a survey of Fair Price Shops under the new system was carried out in March 2014 in the Raipur District. A full list of the shops was obtained from the official CORE-PDS website, of which we selected every third FPS.

If we found a sample shop closed, we went to the next shop on the list. Overall, 41 such shops were covered in the process, and the main findings were as follows.

To assess the readiness of the new system, we collected information on basic infrastructure. Raipur appears to have fared quite well in this respect, as all sample shops had the E-POS machine. 88 per cent of sample Fair Price Shops had a finger-print reader and nearly 90 per cent had electronic weighing machines. The fingerprint reader was, however, not incorporated into the arrangement for the time being. The proportion of shops that had a calculator and electricity supply was also high – more than 90 per cent. 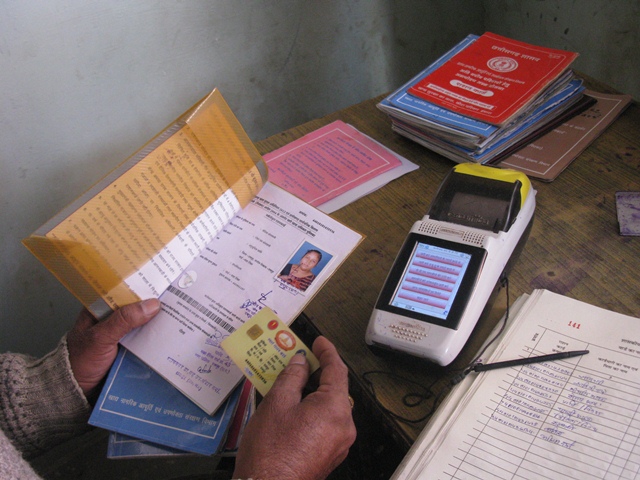 The new system with smart cards, ration cards and an E-POS machine to bring portability in operation at a Fair Price Shop. Pic: Reetika Khera

A majority of FPS dealers (63 per cent in all) reported that they either never faced an E-POS malfunction (20 per cent) or only rarely (43 per cent). Most (77 per cent) also said that getting it repaired was easy and prompt. They just needed to report the problem to the NIC office on the phone. However, distribution of ration does get disrupted at the shop till the problem is fixed.

As far as delivery of grain is concerned, door-step delivery seems to be working. 63 per cent among FPS dealers reported that grain was delivered within a week of completing formalities. That portability is being utilised is clear from the fact that the average number of deliveries per FPS in the sample during March was five. (In the traditional system, delivery used to be made on a monthly basis.)

Two-thirds of the sample FPS dealers reported that the number of cards served had increased since the introduction of CORE-PDS. Among them, 63 per cent felt that this could be because of the distance factor, 70 per cent admitted that it was because the probability of being cheated was now perceived to have fallen, and about half attributed it to higher presence of migrants in the area. Those who had lost customers felt that it was due to distance or queuing time.

However, it must be noted here that the increase in the number of cards served is perhaps not only because of portability, but also the fact that the state government had expanded PDS coverage. To get a more objective picture, therefore, it would be best to get feedback from ration card holders in addition to the FPS dealers, but that was not within the scope of this survey. 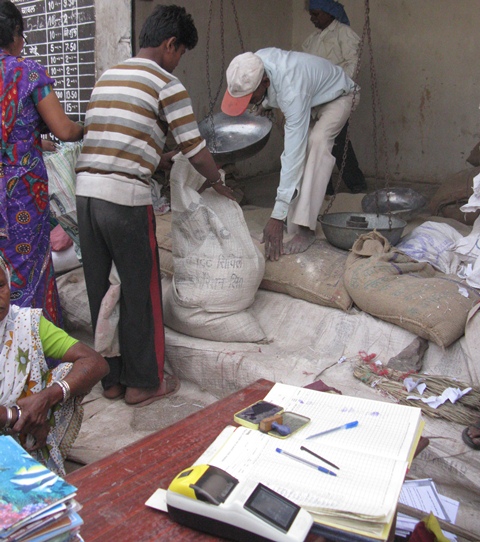 Fair price shops continue to maintain registers even though all transactions are digitised. This shows both, as rations are weighed before distribution. Pic: Reetika Khera

On average, the Fair Price Shops surveyed had been part of the CORE-PDS for a year and a half. The problems with connectivity appear to have improved over time: around 83 per cent of FPS dealers surveyed said that they faced connectivity problems almost every day when they started. But the government has been working towards a solution.

The E-POS machines used earlier could only use one SIM card (provided by Reliance) which had serious network issues, but the new machines with an Idea SIM card worked properly. Now only 30 per cent of the shopkeepers face connectivity problems.

Unfortunately, although offline sales are also possible, only 2 per cent of dealers claim to have used it. Some dealers even reported that officials have asked them to refrain from using the offline mode just now.

Crowd management continues to be a problem for FPS dealers even with portability; around 37 per cent find it difficult to manage crowds and 83 per cent reported that distribution time had increased with the introduction of CORE-PDS.

To deal with overcrowding, dealers had developed innovative ways of distributing ration: some shopkeepers collected a certain number of cards in the morning and told others to come back another day, while some distributed queuing tokens for those waiting.

One reason for the crowding at ration shops is that ration card holders are still not used to the FPS being open for more than two or three days and food grains being available at the shops through the month. Once this realisation sets in, it will result in people spacing their purchases through the month, instead of flocking to the shops in the first week itself.

It was heartening to see that the introduction of CORE-PDS had not come at the cost of traditional safeguards against leakages. More than 85 per cent of the shops had both stock and sales registers at the time of inspection and 85 per cent of these were legible.

However, the contact details of the dealers were available only in 34 per cent of information boards; even helpline numbers were only seen in 37 per cent of cases.

It would perhaps be fair to conclude with a caveat. While the system appeared to be in place in Raipur, where there are enough options available within walking distance, making it a practical proposition even for non-migrant urban card holders, it is not clear how useful such an option would be for non-migrants in a rural setting.

Further improvements are possible in supplies, sales and stocking operations. For instance, it is rare for all FPS items to be available at the same time. Sometimes two trips are required to procure the same commodity. Currently, if the quota is not purchased in the designated month itself, it cannot be carried forward to the next month.

If stocks arrive too late in the month, and the FPS is unable to distribute it to all cardholders before the end of the month, it lapses. This, in fact, is what happened at several shops in February.

Finally, Chhattisgarh's CORE-PDS shows that computerisation and smart cards along with simple reforms in the supply-chain management can help achieve portability. Very importantly, it demonstrates that portability is possible without the use of biometrics. In the ongoing debate on Unique Identification (UID or Aadhaar), its proponents have made it appear that Aadhaar is a necessary condition to achieve portability. Clearly, neither biometrics nor Aadhaar is necessary to make the PDS portable.

The authors are B.Tech students at the Indian Institute of Technology Delhi. This research was done for a project supervised by Reetika Khera and funded by IIT Delhi.