Puneites are passionate about Lord Ganesh. The Ganesh Utsav (Ganesh festival) in Pune is marked by an emotion so intense that it almost resembles mass hysteria. During utsav days, the Lord becomes family, to be worshipped with utmost love and devotion, before he is tearfully bid adieu on the last day of Anant Chaturdashi. In addition to the celebration of the festival at the individual family level, the Sarvajanik (common) Ganesh Utsav sees the involvement of housing societies, commercial and social organizations, and the city as a whole. People throng to the public installations, not just to bow their heads in reverence, but also to check out the latest decorations and tableaux.

The Sarvajanik Ganesh Utsav was spearheaded by Lokmanya Tilak during the British rule as a channel to create social awareness amongst the masses. What is unique to Pune is that the city works hard to ensure that the festival retains this socio-cultural identity along with its religious significance. Over the years, the Ganesh Utsav has held a mirror to society, with its tableaux reflecting current social themes such as AIDS, population control, the Kargil War, political farces, major sports events, and even 9/11! Hence, it comes as no surprise that gradually the festival has donned a distinct green look, in keeping with the burning issue of our times  environment. 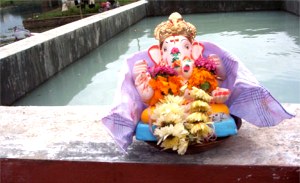 In the last four to five years, Puneites have become increasingly conscious of the impact of the Ganesh festival on the environment. Over time, it was noticed that on immersion, the plaster of Paris (PoP) as well as the chemical paints used in the making of the idols were polluting the Mula-Mutha rivers, which are the major sources of water supply to the city. Moreover, as the PoP does not dissolve easily, large and small idols surface in the waters days after the immersion. This is especially so for the large public idols, some of which are over 20 feet in height. Similarly, the flowers used in worship are also cast into the waters, resulting in clogging and decay. All this resulted in concerned citizens campaigning for "eco-friendly" immersions.

Today, indiscriminate immersions of Ganesh idols in the citys lakes and rivers have abated noticeably. The awareness campaigns by youth groups and environmental organizations have led to a change in mindset. Moroever, the Pune Municipal Corporation has also done its bit by constructing tanks and urging citizens to use those for immersion. Now, at the major immersion sites in the city, one can see these concrete or metal water tanks, huge bins, and bands of volunteers. The volunteers, including a significant percentage of schoolchildren, stand guard at the entrance to the immersion sites. As soon as a Ganesh idol is brought in, they request it to be handed over to them. These idols are then immersed in the tanks.

Collection centers are set up at various locations in the city, and some local groups such as the Friends of Nature, the Andhashraddha Nirmulan Samiti (ANS) or the Anti-Superstition Committee, and the Friends Society also undertake collection campaigns. People are requested to donate their Ganesh idols to these volunteers, who then take them to the immersion tanks.

Traditionally, the flower offerings or nirmalya made to the Lord during the daily prayer rituals are immersed along with the idol. This practice has also come under the surveillance of this eco-drive. The nirmalaya is collected separately in huge bins and later handed over to the agriculture department or similar organizations to be converted into organic fertilizers or used in vermiculture efforts.

But it hasnt been easy, says P Nanawaty of the ANS. Initially our efforts were met with strong resistence by local religious groups. Our workers were beaten up too. The idea of moving away from the traditional immersion in natural water bodies was not appreciated by many. We worked really hard to convince people that we have to do this in order to protect our waters and environment from the damage caused by synthetic paint colors. It was only over time that people realised that the rivers were getting so polluted that after the festival, water could not be used for drinking in the villages ahead, he continues.

ANS started its work with Donate your Ganpati campaigns in Kolhapur in 1997. These efforts were replicated in Pune and the neighbouring Pimpri-Chinchwad corporation from 1999 onwards. Last year, ANS collected over 35,000 idols across Maharasthra in its donation campaign.

These days, many citizens also recycle their idols. They do a token immersion at home in buckets or tubs, and then keep the idol away to be used again the next year. Some others have completely stopped the usage of idols made of PoP or even clay, and switched to metal idols. Vijay Lakshman Bhade, a pensioner from Pune, is one of them. He says, For years, we used PoP idols. However, we realized the adverse effects of such immersions on environment. Then a couple of years ago, we started using the tanks, and finally last year, we did a complete switch to a brass idol. In order to be true to tradition too, what we do is keep a betel-nut next to the idol as symbolic of the Lord and immerse that on the last day, says Bhade, proud to have achieved a perfect blend of tradition and eco-awareness.

The green revolution has spread to the very genesis of the Ganesh idols  the idol-making community living in Pen, about 80 kilometers from Mumbai. They are shifting back to using traditional clay instead of plaster.

Whats more, the green revolution has spread to the very genesis of the Ganesh idolsthe idol-making community living in Pen, about 80 kilometers from Mumbai. Idols made by the Pen craftspeople are considered to be aesthetically true to the Ganesh form, and are much sought after in Mumbai, Pune, Kolhapur, and even abroad. Traditionally, a variety of clay called shaadu would be used. But, though these clay idols are easily soluble in water, they are heavier, smaller, gray in color, not so intricate, and therefore less popular than their PoP counterparts. Hence, some makers had switched to PoP.

However, with growing concerns about the environment, they are making the shift back to traditional clay. Also, there are now many who insist on clay idols. Take Shashank Mhasawade, a public relations professional, for example. He says, We insist on a clay idol every year, even though the finesse and colors are not as grand as those of PoP clays. Also, my mother started the practice of doing the immersion in a bucket at home, and then watering the garden plants with that water. Moreover, we have done away with using thermacol for our decorations. We now just have a basic décor, in harmony with our traditions and the environment!

Those witnessing the Ganesh Utsav in Pune can discern this definite transformation in mindset and the consequent change in the celebrations. As many who have already leaped the chasm declare, tradition does not shackle you down. It evolves over time, giving you alternatives to preserve its sanctity as well as adapt to the changing environment. All you need is the determinationin this case, the determination to go green.