What could make our farmers more prosperous?

Despite India's reliance on the agrarian sector, a serious farming and food crisis persists due to lack of government action and policy indifference. On its 20th anniversary, Gene Campaign releases a Charter of Demands to form the basis of an advocacy programme for bountiful farming, prosperous farmers and healthy food.
19 November 2013 -

That India is an agricultural country with a vast proportion of its populace directly or indirectly dependent on the occupation is no secret. What is relatively underplayed is, perhaps, the entire gamut of problems that plague the farming sector today. Compared to 3.6 per cent in 2011-12, agricultural growth has slowed to 1.9 per cent in 2012-13. Investment in the sector has also seen a steady decline since the decade of the 80s.

Moreover, almost 80 per cent of the public expenditure going to agriculture is in the form of input subsidies (fertilizers, power and irrigation) with only 20 per cent being direct investments in agriculture. Tragic, continuing farmer suicides point to the crisis faced by peasants torn by debts, crop failure, their inability to sell good harvest at a reasonable price and insufficient access to credit.

While these problems are not entirely unknown and there are ideas afloat to tackle these, not many have been articulated in concrete terms to evolve an actionable agenda. It is for this reason that Gene Campaign, a well-known research and advocacy organization working on food, nutrition and livelihood security, decided to mark the beginning of its 20th anniversary celebrations with a brainstorming session among experts in the field on the current crisis facing farming and farmers. The session purported to focus attention on solutions to the current problems and develop a Charter of Demands that could form the basis of an advocacy program for bountiful farming, prosperous farmers and healthy food for all.

Gene Campaign identified several critical areas of concern that pose major impediments to making Indian agriculture more profitable and its farmers better off. Some of these would be rising input costs, inadequate minimum support price for farming produce, low banking penetration and resulting financial constraints, a lack of grassroot level agricultural extension systems, increasing fragmentation of holdings and poor irrigation facilities, overall environmental degradation and loss of bio-diversity, and the like. 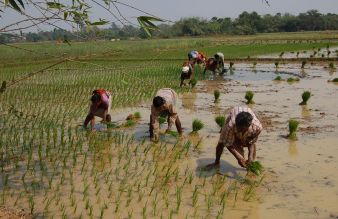 All government policies must be geared towards ensuring that the Indian farmer is enabled to become an entrepreneur. Only then can those who are in the riskiest profession in the world be empowered, making farming profitable and farmers prosperous.

•  Agricultural policies are to blame
•  Much research, but no action

These and other factors have reduced productivity and consequently the profitability or remunerative attractiveness of the sector, luring the younger generations away from agriculture towards more promising occupations in the cities. There is today a strong need for public sector investment to focus on building effective and efficient value chains and linking farmers to market.

There are other less obvious issues as well. For example, despite the realization that women play a critical role in agricultural development, their participation in the decision making process is zero or negligible. They primarily undertake the un-mechanized agricultural tasks which only adds to their burden. Equality and land rights are a far cry for them yet, which in turn constrains farm output. As noted development economist Bina Agarwal writes in a recent article for the Women's Feature Service "About 40 per cent of agricultural workers in India are women but their productivity is seriously constrained by their lack of access to land, credit (for which land can serve as collateral), inputs, technical information, and so on. Without land titles women are not even seen as farmers and seldom benefit from government schemes meant for marginal farmers."

Based on these and many other considerations, the following charter for policy interventions was formulated in the session organised by Gene Campaign on 9 November:

Gene Campaign, a research and advocacy organisation, was founded in 1993 by Dr Suman Sahai and a group of experts. This write-up is derived from their release on the occasion of commencement of their 20th anniversary celebrations.