The recent episode in which a mysterious boat was intercepted by India off the coast, and blew itself up, may or may not have anything to do with Pakistani terror, but has important implications for national security strategy, external relations and domestic political dynamics. Firdaus Ahmed explains.

The government's tying itself into knots to explain how the mysterious boat, allegedly with four Pakistani terrorists on board, went up in flames when intercepted by the Coast Guard at the turn of the year suggests there is more to the incident than the government has let us in on.

On the positive side, and as the government would have it, the episode bespeaks of an alert India, ready to take on terrorists out to disrupt India's party for the Obama visit to Delhi month later this month. However, since the incident was not quite straight forward, it apparently has a telling underside.

The coordinated response between the National Technical Research Organisation, that picked up the intercepts, and the Coast Guard that was vectored on to the site, albeit in a tandem that left out the Intelligence Bureau, owed perhaps to heightened alertness levels in view of the master communicator Narendra Modi's first Republic Day in the spotlight. However, the alertness levels would likely have equally to do with the prospect of Pakistan getting back at India for the horrible terror attack on a school in Peshawar.

Notwithstanding the fact that Modi was quick to convey India's concern to Nawaz Sharif and NSA Ajit Doval went across to the Pakistan embassy to sign the condolence book, Pakistan's core nucleus, comprising its army and ISI, undoubtedly deems an Indian hand in the attack.

Though this would unlikely have been a direct hand, for example in terms of choosing the target, in Pakistan's view, it is more of an indirect one in terms of propping up the Fazlullah-led Tehreek-e-Taliban Pakistan (TTP) in Afghanistan, where India has an expanding footprint. Therefore, for India to be alert makes strategic sense and may explain the incident at the tri-junction of the maritime boundary between the two states and high seas.

In the government's explanation, it is the result of alacrity in response. Alternatively, as the opposition appears to suggest, it was an over-reaction to what may perhaps have been merely a smuggling operation. Yet another explanation, from the conspiracy theorist's cupboard, could well be that it is an Indian intelligence operation to demonstrate Indian alertness levels to Pakistan so as to deter the latter from any disruptive action. The last cannot be discounted since the national security establishment has now acquired an intelligence czar as its head.

From an intelligence perspective, there are several benefits from a staged event followed by deft information management. One, it helps deter Pakistani adventurism. Two, it serves to put Pakistan on the defensive, having to explain that it had nothing to do with the incident. The seaboard opens up as a third location of pressure on Pakistan, expanded engagement with Afghanistan and its security forces and resumed firing on the Line of Control and working boundary in J&K being the other two. 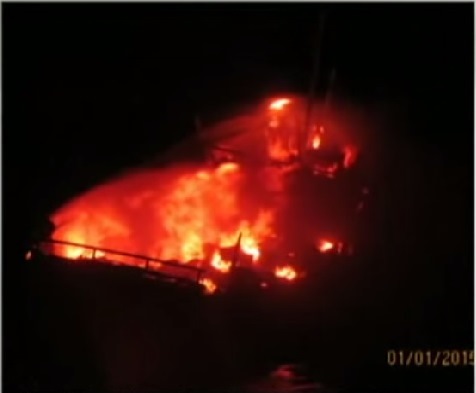 The explosion in the seas. TV grab, courtesy Youtube

Three, it announces India's reservations about the US policy of continued engagement with Pakistan, including the release of an additional  tranche of monies for fighting terrorism, by demonstrating that Pakistan is not doing enough on that score. This sets the stage for the Obama visit during which this could figure as one of the talking points in order to get the US to shift to reliance on India for its regional aims, as against its practice of leaning on Pakistan.

Four, it helps create a narrative in which India is at the cross hairs of terrorism. This has multiple benefits including bringing intelligence operations to the fore in the bureaucratic game of security policy making. More broadly, this helps justify the hard line turn in India's Pakistan policy, and most importantly, it is in keeping with the ideologically-inspired strategic doctrine of the new government.

The significance of the (non) incident, therefore, is in its highlighting this facet of the new regime in Delhi.  Consequently, there is a valid case for the opposition’s interest in it and for raising the issue of whether democratic India needs to speak in one voice on national security.

It is a long-held national security myth that there needs to be a bipartisan approach to national security. This is untenable theoretically in the light of political parties necessarily reflecting divergent national security approaches. Conservative parties tend towards structural realism-inspired strategic doctrines, while liberal parties, of the centre-right and centre-left, can be expected to lean towards the other end of the realist-conservative/liberal-rationalist continuum.

With the ascent of Narendra Modi to power, the right wing government has made extensive efforts to make itself distinct from its predecessor, including in the foreign and strategic policy domains. This includes the Pakistan policy in which there has been a decided shift from deterrence in strategic doctrine, which implied keeping Pakistan from adventurism, to compellence, which implies making Pakistan fall in line finally. Modi’s Pakistan policy of compellence is currently a work in progress, with the episode in question being only the latest of plenty more to come.

The opposition therefore cannot be expected to compliantly cheer from the gallery. The Congress has represented the liberal realist tradition; in so far as it could not veer towards the liberal end entirely, it was due to electoral compulsions, in which it did not want to be on the firing line of the realist dominated strategic community.

Also, universally, agencies of government such as the intelligence and the military have a realist bias, best exemplified by the government having within its ranks a former intelligence head and military chief. The Congress, therefore, was content to carve out its space at the centre of the realist-liberal spectrum on security.

However, the Modi government, not having to look over its shoulder, has placed itself unapologetically within the conservative-realist framework. This is in keeping with its ideological underpinnings in cultural nationalism. It also helps it ingratiate itself with the intelligence and military arms of government – the two arms it requires by its side as it goes about the more extensive task of resetting India socio-culturally over the coming decade, which promises to be the Modi-era.

The current dominance of the ruling party, assisted by an assorted support base of saffron pseudo-cultural outfits, enables it to unilaterally redefine the security sphere. Clearly, opposition is warranted not only for its own sake, but also for the fact that opposing national security perspectives cannot but differ on both the overarching principles to which national security is pegged, as well as on the detail.

Finally, an ideological strategic approach inevitably leads to catastrophe. While there is no end to examples on this score, the neo-con years under ‘Dubya’ Bush in the US is an obvious one. While US had the money and Obama to bail itself out, India may be less able - and lucky - to survive its home grown neo-cons at the helm.

Therefore, this first stirring of the opposition in the Modi era is to be welcomed. It is an exercise of democratic parliamentary control over the government. It compensates for the erosion in checks and balances and for the deficit opening up in professionalism of the national security apparatus resulting from the increased like-mindedness between it and the government.

Firdaus Ahmed, a regular columnist, is author of Think South Asia and Subcontinental Musings available at his blog www.subcontinentalmusings.blogspot.in .