This money grows on trees

A recent report of the Comptroller and Auditors General of India (CAG) has rapped the Power Finance Corporation (PFC) for extending a loan of Rs.100 crores (one crore = 10 millions) to the Shree Maheshwar Hydro Power Corporation Ltd (SMHPCL) without ensuring the fulfillment of pre-disbursement conditions stipulated for the loan. Last year, the Indore High Court came down on the company with a restraining order after the MP government had attached its properties. How did this come to pass for a mega private power project?

The Maheshwar Hydro Electric Project originated as a Madhya Pradesh state sector initiative in the eighties. Being one of the 30 big dams planned under the ambitious Narmada Valley Development Project, it was to be built by Narmada Valley Development Authority (NVDA). But in 1989 it was transferred to the Madhya Pradesh Electricity Board (MPEB). However, construction of bridges, maintenance of a project hostel and resettlement and rehabilitation works remained with the NVDA. The 400 MW project then got an administrative approval in September 1991 and the cost of the project was estimated to be Rs. 456.63 crores then.

However, in the 90s, the Indian economy opened up for privatisation. In May 1996, the S Kumars promoted SMHPCL took over the project from MPEB and NVDA. However, within these five years the costs escalated from Rs 456.63 crores Rs 1569 crores in 1996. But after the takeover by the S Kumars, the financing of Maheshwar Project became a convoluted tale of financial institutions risking public money and private promoters diverting and siphoning funds, inviting the CAG's scathing indictment. The saga sweeps into many institutions, with instantly recognizable name tags -- IFCI, IDBI, SBI, LIC, GIC, Bank of India, Dena Bank and others like the Power Finance Corporation (PFC, Centre owned) and MPSIDC (Govt. of MP).

The Power Finance Corporation (PFC) was established in July 1986 as a development Financial Institution dedicated to the power sector. It's a Public Sector Undertaking, wholly owned by the Government of India. Its mission is "to excel as a pivotal developmental financial institution in the power sector committed to the integrated development of the power and associated sectors by channeling the resources and providing financial, technological and managerial services for ensuring the development of economic, reliable and efficient systems and institutions". As it turns out, PFC disbursed loans for the Maheshwar project amounting to Rs 99.32 crores (Rupee Term Loan of Rs 54.63 crores and Foreign Currency Loan of Rs 44.69 crores) to SMHPCL during the period from February 1999 to July 2000. 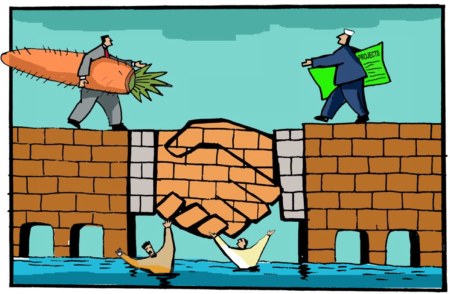 And this is what the CAG had to say, reviewing the disbursement of loan. "While approving the loan to the party promoted by S. Kumars Group, Board of Directors (BOD) had directed that the PFCs financing would be released only after the promoters bring in equity as committed by them. Despite the pre-disbursement conditions not being fulfilled, the PFC released Rs 99.32 crore. The party, however, started defaulting in payment of interest from October 2000 and did not pay interest amounting to Rs 39.54 crore till 31 March 2003. Implementation of the project has been held up since February 2001 due to promoters inability to bring in further equity, backing out of the foreign collaborators and non-release of further disbursements of the loans by the other financial institutions owing to default by the party."

To this comment, the PFC management sought to argue that "it has been following the same pre-disbursement conditions as of the lead financial institution of the consortium (i.e. IFCI) in accordance with its policy and relaxed the conditions in line with the dispensation made by the lead institution." CAG refutes this argument saying, "The reply is not acceptable, as according to its policy, the PFC could stipulate additional terms and conditions or procedures. In view of the reservations of its BOD about the financial position of the promoter group as regards its capability to invest in equity, the PFC should have safeguarded its financial interest by ensuring compliance of the pre-disbursement conditions, for which the lead institution was not responsible."

CAG Process: After CAG submits a report to the Parliament, the Public Accounts Committee (PAC) and the Committee On Public Undertakings (COPU) follow up with the respective departments, corporations, or ministries to file Action Taken Reports (ATR). Such ATRs are then routed to the CAG, but not placed in the public domain.

The operations of Power Finance Corporation are overseen by the Ministry of Power. The Ministry was aware of this since June 2003 and in fact, the Ministry held a meeting with financial institutions having stakes in the Maheshwar project on March 04, 2003. While the PFC management has sought to raise an argument in response to the CAG's comment, the Ministry had not responded on the matter. The CAG waited until August 2003 and finalising the report for submission before the Parliament (2004). The Ministry ought to have responded on the audit observation, but chose not to.

SMHPCL's failure to bring in equity

By the end of 1999, SMHPCL had borrowed around Rs.122.90 crores from various banks and institutions including the IFCI, IDBI, SBI, LIC, GIC, Bank of India, Dena Bank etc. The promoters had put in around Rs 136.40 crores as their equity. The Policy of the Ministry of Power on private participation in the power sector, Gazette notification dated October 22, 1991 states, "at least 11% of the total outlay must come through promoter's contribution in any private project."

At the level of outlay cleared by the techno-economic clearance of 1996 of Rs 1569 crores, the promoters' contribution at 11% needed to be at least Rs 172 crores. As per the IFCI Reappraisal report of March 2000, promoters had infused Rs 136.40 crores till the end of the year 1999, which was Rs 36 crores less than the minimum that should have come from promoters to qualify the policy stipulated by the Ministry of Power.

However, the total outlay of the project shot up since then to be around Rs 2233 crores, which necessitated a minimum promoters' contribution of Rs 245 crores. At the 2003 meeting held by Ministry of Power, with respect to the equity to be brought in by the promoters, the Managing Director of SBI insisted that "promoters must infuse its own share of balance equity of around Rs 82 crores", while at the same meeting, one of the promoters Shri Mukul Kasliwal is reported to have informed that "only Rs 41 crores remained for which also, arrangements had been made and that the amounts would be infused in due course."

Shouldnt the Ministry of Power have taken such assurances with a pinch of salt? How did the outstanding shortfall on promoters' minimum equity contribution from 1999 to 2003 inspire any confidence in their assurances?

Not only had SMHPCL failed to bring in promoters' equity contribution, making it lay the burden increasingly on the debt in form of loan assistance from financial institutions, it also diverted and siphoned the funds it received to purposes other than the project construction. After such diversion was noticed, it was asked to return such capital advances. However, on this front also it has been reporting the shortfall with impunity.

As on October 31, 1999 SMHPCL had incurred an expenditure of Rs 357.60 crores on the project. A March 2000 reappraisal report of one lender, IFCI, stated without mincing words that, "out of the said expenditure, Rs 106.40 crores has been given to some parties who have not carried out their assignments". The IFCI report also notes that Rs 19.30 crores of this money was given to SMHPCL's holding company  Induj Enertech, although the company in question had no contracts or any experience to work on the project. Stipulating special pre-disbursement terms and conditions, IFCI specified, "SMHPCL shall bring back the capital advances of Rs 106.40 crores, with interest given to various agencies who have not been awarded with any project contracts."

A statement of SMHPCL's statutory auditors, Malpani & Associates dated March 27, 2003 claims that "out of the aforesaid capital advances amounting to Rs 106.35 crores, SMHPCL has recovered Rs 68.59 crores till December 31, 2002, including Rs 15.00 crores from Induj Enertech Ltd." This further reaffirmed the skepticism on SMHPCL's ability to bring back capital advances as by their own admission Rs 37.76 crores with interest was yet to be brought back.

SMHPCL has also failed to honour the outstanding debts it owed to various agencies. What is shocking is that the company had not paid for the properties that it took over from NVDA and MPEB in 1996. The role of MPEB and NVDA is also re-doubtable for having handed over the charge of these properties to private promoters without receiving payments for the same. The CAG report for the Government of Madhya Pradesh (Commercial) for the year ended March 31, 2000 mentioned, "Maheshwar HEPS and Pench TPS were sold to private parties in November 1992 and July 1994 respectively for a value of Rs 86.11 crores. Till date amount has not been realised."

As per media reports in April 2002, the SBI Caps filed a winding up petition under section 434 of the Companies Act, 1956 against the SMHPCL for non-payment of dues worth Rs 3.7 crores plus interest in the Indore High Court.

Close on the heels of this move, Madhya Pradesh State Industrial Development Corporation (MPSIDC) has declared S Kumars Powers Corporation Ltd  now known as Induj Enertech Ltd  as "willful defaulter" through a public notice in The Economic Times dated September 13, 2002 for defaulting on a loan of Rs 8.02 crores plus interest thereon. This action came one full year after the critical remarks in 2001 CAG report pointed out that 'the MPSIDC Board had loaned Rs 8.02 crores of money under irregular circumstances to the S Kumars holding company - Induj Enertech Ltd, and had violated the maximum allowable limit of Rs 3 crore.

The MPSIDC had extended a loan of Rs 44.75 crores to Induj Enertech Ltd in 1999-2000. SMHPCL defaulted on the payment of the said loan, MPSIDC issued a Revenue Recovery Certificate ordering that the recovery of the outstanding dues should be made from the attachment and sale of the movable and immovable properties of the Maheshwar project under the Madhya Pradesh Public Money (Recovery of Dues) Act 1987 and the Madhya Pradesh Land Revenue Code, 1959.

One year after the CAG criticised the MPSIDC Board for loaning money under irregular circumstances to the S Kumars holding company, the state owned corporation declared the S Kumars company as a "willful defaulter" through a public notice in The Economic Times.

If the push for privatisation is to bring in additional resources to counter the resource crunch felt by the public sector, the financing of Maheshwar Project shows otherwise. The project's woes are a testament to how financial institutions have risked public money, while the private promoters of the controversial project engaged in diversion and siphoning of funds in addition to repeated defaults.

The reports from the apex audit institution of the nation are there for all to see. The Ministry of Power must own up to its responsibility in this matter.