Migrant labourers of MP are stuck in debt in Maharashtra and also in a system that assures no health coverage for their hazardous occupation of stone crushing. Jaideep Hardikar recounts their travails.
01 June 2004 -

Panchgaon (Nagpur): He belongs to Ugrithana village in Seoni district of Madhya Pradesh. He works as a daily-wage migrant labourer at a stone crusher on the dusty outskirts of Pachgaoan, about 25 km South of Nagpur and borrows money from a private usurer from Balaghat district for his household needs. Just about 30, Madan Warkhade, a Gond farmer of four-acre land, is already a bonded-labourer  to both, the owner of the crusher here and the private moneylender at Balaghat.

Like many other migrants toiling at the crusher units around, this farmer is bearing the brunt of an agriculture crisis and unemployment that has ripped apart the countryside for the last decade or so. And, hes cursed to face an unending poverty too.

This is just the beginning of his multiple woes. It would take at least two generations of Warkhades family to make a back-breaking attempt to come out of this web of poverty going by the present wages and government policy for migrant labourers, or rather the lack of it. Theres no sign that things would improve on the policy front. So, his adolescent son is ready to join him in what seems a daunting task ahead - earning good money to run the family, repay the debt and send some savings back home to the village where Warkhades parents live. But, the ferocious grind that the family undergoes everyday to salvage itself has begun taking its toll. And, theres no backup. 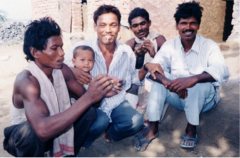 An intoxicated Madan Warkhade lights a bidi as he sits with his fellow migrants at a stone crusher unit in Pachgaon near Nagpur.

Warkhade has developed racking body ache and irrepressible pain in both his palms and feet by working overtime at the crusher, breaking stones in dangerous conditions at a fierce speed without any protective gear and soaring temperature notwithstanding. Yet, he is convinced that the country liquor he consumes is better than any medicine. For, one, it works as a soothing panacea to the pain. Two, its cheaper, and much more easily accessible. Drink it and forget all your worries, Warkhade chuckles. You can eat less to save some money on food but still get a sound sleep after having a glass or two of this country liquor, he reasons. Almost every male migrant labourer here consumes liquor, with things having gone wrong on almost every front, including health.

Today, however, Warkhade started boozing as soon as he was up from his bed early morning in his cramped hovel. Badly ruptured palms and feet have been giving him a torrid time of late. Fully drunk, hed proceed after some time to the stone the crusher for another days grind, with the pain suppressed for the time being. There he would work the whole day without shoes or hand-gloves to break the stones with the help of a crowbar and a heavy hammer. When hed have crushed a tractor-trolley full of stones to pebbles he would end up earning a dismal Rs 40. But on off days, he gets nothing. The meagre earnings, he says, are still better than having nothing, even if the work is excruciating and killing.

Says the supervisor: They can earn more you see, if they work more. On days they can earn up to Rs 80. Thats a good amount of money. He does not speak a word about the declining health conditions and the fact that crusher owner has not given any protective gears to these workers, though he is under this obligation. Every labourer at a crusher is entitled to a pair of shoes, hand-gloves, helmet and mask. But by managing the labour inspectors and the department bosses, the owner violates the norms, while the poor migrant labourers pay a heavy price. In case of accidents, there is no insurance cover. The owner pays Rs 500 to the next of the victim and ends the chapter, as one of them did when a migrant labourer died in an accident at one of the crushers a few months earlier. Labour Inspectors get a hefty amount though to cover up things.

Meanwhile, before proceeding to work, Warkhade shows his feet that have developed thick and hard circles of blood clots due to extreme heat and persistent injuries. These would require to be operated upon, but he has no money for it. His palms have become rough and hard as coconut. He says it becomes even more difficult for him to bend his fingers after the work. Without hand and leg gears, his palms and fingers have evidently suffered multiple injuries as he breaks the stones with a hammer, tirelessly, every day.

By the evening, Warkhade says his pain would aggravate and he would need to consume a bottle of liquor to get a sound sleep, while the rest of his family would depend on the earnings of his wife  Rs 20 a day. That is when she and seven other labourers would load eight trolleys with stones. So, while much of Warkhades earnings go into alcohol, the familys problems multiply. The dream of earning good money and saving some of it is shattered. The finances go berserk. And, so does the health of all. The irony is this family cant afford to take up farming in its home village, given the fact that there is no irrigation. Having migrated to this place in the hope of a better life, they cant afford to take a break from the work since it would mean going to bed hungry.

Women, like Warkhades wife and his two daughters, are suffering too  In more than one way. Their food intake is less; these people eat only rice of degraded quality and some vegetable, while the amount of energy they put into work and running their households is huge. Even during pregnancy, says Bayatrabai, a female migrant labourer, we dont get to eat good food. Most of them therefore are anemic. As Bayatrabai herself is. So are Dukhli, Sujoti and other women. Yet, compulsion is such that they cant stop working.

A peep into the shoddy living conditions of the migrant labourers at over 200 crushers in this area begs only one question. Why do these people desert their villages to become the Beasts of Burden at a new place? Theres no work for nine months in our villages. Theres no irrigation for even one crop we take; we have to rely on monsoon. For the last five years, rains have been playing truant, and the paddy crop has taken a stick. The state government does not open up any work for us. We dont get any credit since all of us are already defaulters of banks, explains Channuram Shirsate, a migrant labourer at another crusher at Surgaon. Channuram migrated five years ago from Maneri village in Rajnandgaon with his entire family. Here he and his better half work the whole day to earn something like Rs 90 a day. They can save Rs 40 a day, they say.

The reasons for migration remain the same for almost every family. The rate of migration however got impetus after the old migrants found the work quite lucrative by their standards. Over the years, they helped the other villagers to find work here. In the mid 90s, unfortunately, the fast increasing rate of migration brought in a crash in wages. Thankfully, says Channuram, the local villagers and farm-labourers dont seek work at crushers. Which means the migrants would get all the work, albeit at cheap wages.

These conditions and many other factors have set the ground for the emergence of private moneylenders in this part. Interestingly, the usurers are not locals. They hail either from the neighbouring districts of Madhya Pradesh like Balaghat or Chhattisgarh like Rajnandgaon. So, since the money is lent in that district, the government machinery of Maharashtra can do nothing. But the Madhya Pradesh government has to play a vital role in checking the illegal lending by the private usurers. They are to be brought in the ambit of the financial regulations. According to the migrants, the lenders don't have license to give loans. In what is essentially an off-market operation, lenders clandestinely get the borrowers to hypothecate either land or homes in many cases. Migrants stand to lose their holding in the case of default. The MP government can nip these practices in the bud by asking the police, the labour machinery and the revenue officials to take cognizance of complaints and zero-in on such usurers suo-moto.

On its part, the Government of Maharashtra can ensure that the migrants get their legitimate wages and facilities at the workplace through its labour department. But the labour department never comes to know about the deals, in part because the borrower does not hail from the state. Its construed as if the labourers are borrowing money on their own volition. The chain operates through the migrant labourers only. The accounts appear well maintained.

Such is the faith that though the deals are between the usurer and labourer, the latter repays the debt honestly because then he gets a loan from the usurer again. The money-lender slaps an interest of three per cent over the capital per month. So when Warkhade borrowed Rs 2000 from the money-lender, he paid the high interest of 36 per cent over the capital in a year, without understanding the exploitation he was subjected to by the usurer.

Warkhade, sadly, is hugely indebted to his exploiter. The Sahukar was very kind to us, he says, he gave us money when we were in trouble. His family purchased clothes and sent some money to his old parents in the village. What if the money is not repaid to the Sahukar? We may be put into jail and we wont get the loan again. While this family lands in a debt trap, another spiral engulfs it in the meantime. The family works overtime, pushing itself beyond physical limits in extremely trying conditions, to earn an extra pie at the crusher. Warkhades wife looks pale and weak. She takes care of her household chores and fills up at least 10 trolleys with boulders in a day. There is no respite, barring a couple of occasions in a year when the family visits its home village and spends some time in its own land. Then again, the petulant noise of crushers recalls the family. Warkhade, his wife and their son again get ready and leave their village for another long and tiresome grind. For a fresh attempt to be rid of bondage.

Jaideep Hardikar is a Nagpur based journalist. He has been a recipient of several national media fellowships and was the winner of the 2003 Sanskriti award from Sanskriti Foundation, New Delhi. This article is a part of an ongoing study under the NFI Fellowship Programme. The author visited the region first in 2003 and much of the information was obtained then. In early June 2004, the author visited the labourers again and found no change in the situation.