Looking beyond ‘Chindia’s’ common cause on climate

The joint statement by India and China on climate change at the end of PM Modi’s recent tour of the country has expectedly created considerable hype. Darryl D’Monte takes a balanced view of its import and the real challenges for India in the face of global climate politics.
31 May 2015 -

Too much is being read into a joint statement on climate change by India and China at the end of two days of talks between Prime Minister Modi and President Xi Jinping earlier in May.

It is significant that these two biggest emerging economies – sometimes clubbed as “Chindia” – singled out this issue in the only standalone statement amidst all the handshakes and bonhomie on a lot of economic and political issues on the agenda. But that is as far as it goes.

Commentators have been reading a basic shift in policies in the statement. The first is that India and China are moving away from the broad distinction between industrial and developing countries, which was enshrined in the momentous UN Earth Summit in 1992 in Rio de Janeiro. They see a readiness to examine each country’s level of commitment to reduce greenhouse gas emissions, rather than a blanket dichotomy between rich and poor countries. 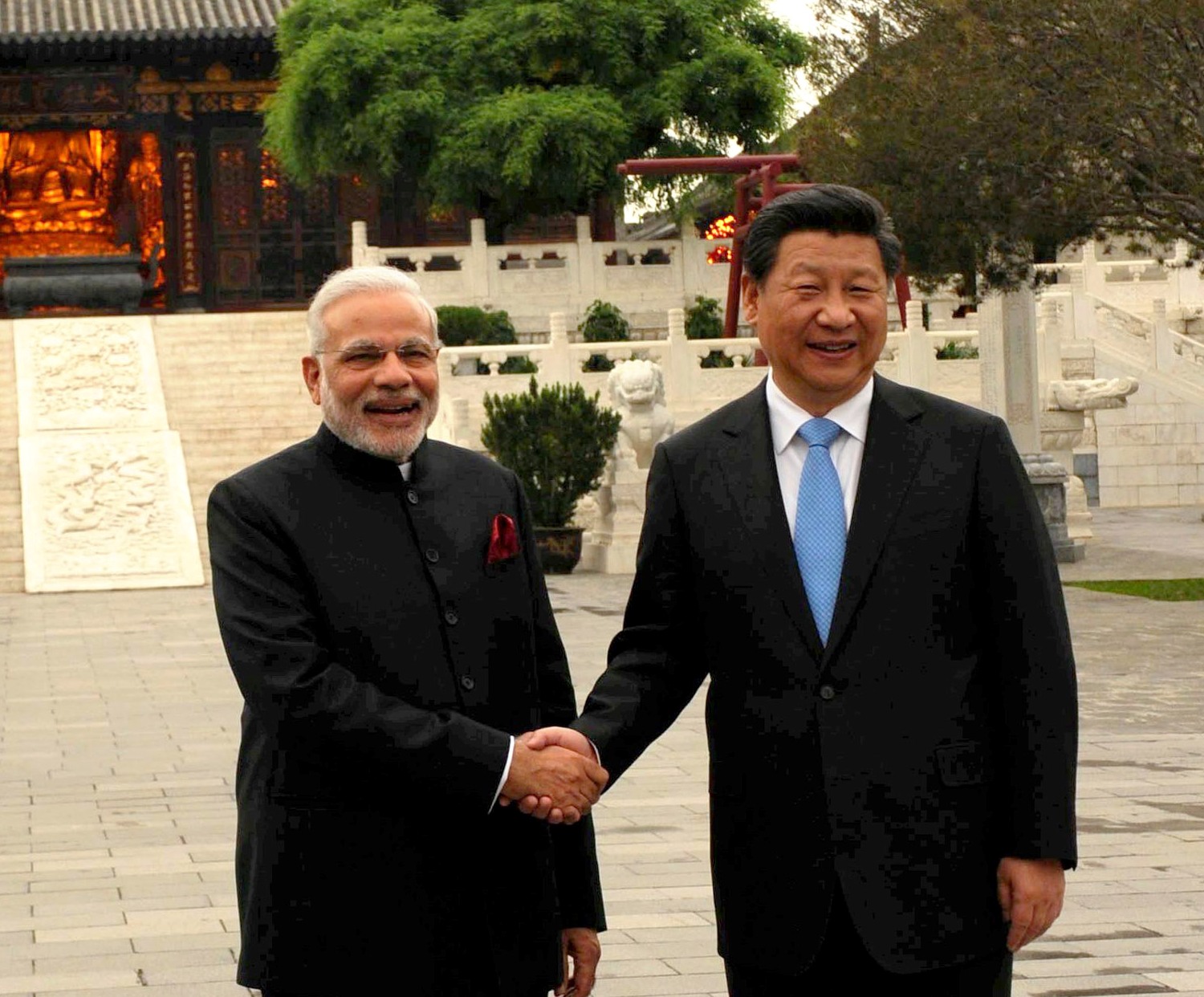 Prime Minister Narendra Modi with the President of the People's Republic of China, Xi Jinping, at the Big Wild Goose Pagoda, China on 14 May, 2015. Pic: Press Information Bureau

Those who see a change in positions by these two giant economies believe that things have changed drastically since 1992 – only a year after India began to liberalise its economy – with both economies now growing rapidly and having a sizeable middle class.

As Ramesh records in his massive tome, Green Signals: Ecology, Growth and Democracy in India (OUP, 2015), “I was fearful that China would move ahead by forging a deal of its own leaving India on its own…The four countries, despite being in different places on the development curve, had common interests in protecting their development space.”

At the cataclysmic midnight hour – literally – of the concluding night of the summit, the US president Barack Obama gatecrashed into a BASIC meeting and railroaded its leaders into agreeing to an accord which led nowhere, while it avoided an outright breakdown of talks. The road from Copenhagen through succeeding annual summits has been downhill all the way.

Much ado about nothing?

India has virtually scuttled its role in the G77 bloc of developing countries, which it led under environment minister Kamal Nath during the Earth Summit. This is also in consonance with its belief over the last few years that it should no longer be a recipient of aid; on the contrary, it should be an aid-giver, at least to neighbouring South Asian countries.

This ignores the harsh reality that measured by almost any social welfare yardstick, it figures at the bottom of the pile, GDP growth notwithstanding. The annual UN Human Development Report a few years ago, using a new multi-dimensional poverty index, found that eight Indian states had more poor people in absolute numbers than the poorest 26 sub-Saharan African countries. One in four Indians don’t access electricity.

Thus, the joint statement between the two countries amounts to little more than platitudes, with a soupçon of rhetoric. It was issued in the knowledge that ahead of the culminating UN Paris meet on climate this December, the US and EU will be asking what China, the world’s biggest polluter, and India, the third, will be doing to cut their emissions.

The US-China agreement in 2014 spoke of “national circumstances”, while the current catchphrase in climate negotiations is “Intended Nationally Determined Contributions” or INDCs, which would indicate as much. In March, the US, historically the biggest polluter, issued its much-awaited INDC, which proved a damp squib.

As the Centre for Science & Environment commented, it was a mere reiteration of its pledge in November 2014 and “neither fair nor ambitious, and way short of what is needed to keep global warming less than 2 degree centigrade”. That is the cap which, according to scientists, the world’s average temperature needs to remain below to avoid the catastrophic consequences of global climate change.

The US committed to reduce its greenhouse gases by 26-28 per cent by 2025 as measured against its 2005 levels. What might otherwise appear as handsome cuts pale into insignificance – just 15-17 per cent -- when measured against 1990 levels. On the other hand, the European Union, the most proactive on the climate front, has pledged that it will reduce its emissions by 40 per cent over 1990 levels by 2030 – twice the US commitment.

As Meena Raman, negotiations expert at Third World Network in Penang, said: "The US proposal to the UN climate talks sends a dangerous signal that the world is drastically off-track to confront the climate crisis. No credible scientific assessment can say that the US proposal sets us on a path to avoid the gravest risks that climate change poses to our food systems. It completely ignores its huge historical responsibility for causing the climate crisis.  This is a proposal for more drought, more devastated fish stocks, and more wars over water. The US proposal is an ingredient in a recipe for disaster."

Ironically, even the modest US contribution is fraught with problems. It is an open secret that Republicans, as well as a few Democrats themselves, are not keen to cut emissions because it will take a toll on the US economy. If the next President is a Republican, that will put paid to Obama’s proposals.

Obama has ordered higher fuel efficiency standards for cars and trucks, cuts in federal government emissions and pollution laws for power plants. Senate Majority Leader Mitch McConnell, Republican, has been urging US states not to comply with the power plant rules, and has argued that the US could never meet Obama's target even if those rules do survive. “Our international partners should proceed with caution before entering into a binding, unattainable deal," McConnell said.

China and India have stated that their agreement “shall be in full accordance with the principles, provisions and structure of the UN Framework Convention on Climate Change (UNFCCC), in particular the principles of equity and common but differentiated responsibilities and respective capabilities, reflecting different historical responsibilities, development stages and national circumstances between developed and developing countries”.

The Paris agreement should address all the pillars: “mitigation, adaptation, finance, technology development and transfer, capacity building and transparency of action and support in a comprehensive and balanced manner,” according to the joint statement.

At the end of Modi’s trip to China, Mongolia and South Korea, a senior Indian official who had helped draft the joint statement said:  “We have made it as clear as we can in diplomatic language – if developed countries want us to take strong measures after 2020 under the Paris treaty, they will have to start putting their money where their mouths are.”

Under the current circumstances, that appears to be a tall order. Contributions to the global Green Climate Fund, set up in Copenhagen, have been niggardly. In the Danish capital, then Secretary of State Hillary Clinton strode purposefully up to the dais and said that “we” would provide $100 billion to help developing countries cope with climate change.

It later transpired that “we” meant not the US but all industrial countries. Furthermore, for the initial couple of years since 2009, only $10 billion would be provided per year, culminating in $100 billion per year by 2020. Further still, this would not only comprise grants but also encompass existing aid (“overseas development assistance”) and private investment.

In fact, actual contributions have just totalled $5.5 billion in these six years. Some 33 countries, including eight developing nations, have pledged on paper just over $10 billion. It is also not clear what kinds of projects the Fund will support.

The road ahead for India

China has announced that it will cap its emissions by 2030. India, which is far less developed, is not prepared to do any such thing.

However, former Prime Minister Manmohan Singh had declared in 2007 that India would never exceed till 2050 the average per capita emissions of industrial countries, now standing at 10-20 tonnes per year. Industrial countries should reduce their emissions by 60-80 per cent by 2050, so that their per capita levels drop to 4 tonnes. India, in contrast, would only maximise its levels by doubling its emissions from the current 2 tonnes per capita.

After Copenhagen, India pledged to reduce its emission intensity – emissions per unit of GDP, as distinct from absolute emissions cut – by 20-25 per cent by 2020, on 2005 levels. Ramesh has recently suggested that it could extend this to 2025 and 2030 and submit an INDC “anchored in a reduction in emissions intensity”. This will not lead to an emissions fall, but there will be a lower level of emissions on account of an extra dollar of GDP generated.

The obvious step for India, then, seems to be to launch a huge programme for renewables and solar energy in particular – where Chinese technology at favourable rates would be welcome. There also needs to be a renewed effort at pushing the biogas progamme at the individual home or farm level.

Most of all, and a measure that would resonate with Swachh Bharat, is to replace dirty and inefficient woodstoves with new chulhas and better fuels. This would both meet domestic development needs and curb, globally, the Asian Brown Cloud that is largely caused by such widespread air pollution in the Indo-Gangetic belt.