Dolly Basu's production of The Merchant of Venice, with special children cast in nearly all roles, has taught her as much as it has helped the children themselves. Shoma Chatterji reports.
14 July 2011 -

Choopkatha is a theatre group in Kolkata that stages plays, mainly in Hindi and English. But it also has another specific agenda - it presents plays performed by specially challenged children. Recently, it celebrated its 16th anniversary with a performance of William Shakespeare.s The Merchant of Venice, translated into Bengali by Mohit Chattopadyay.

Choopkatha was founded jointly by Asit Mukhopadhyay and Dolly Basu, but Dolly considers Mukhopadhyay her mentor and guru. After he passed away, Dolly ran the organisation on measly funding because a major segment of her time was occupied with play therapy - healing through acting - for children in her residence in Kolkata. The huge cast for The Merchant of Venice is almost entirely made up of specially challenged children, who suffer from a variety of psychological problems and social traumas. Play therapy practiced by Dolly Basu helps them gain self-esteem and confidence in themselves.

"I did some plays with mainstream children, like Takka Bokkar Raja, Little Red Riding Hood, Little Tolstoy and Haw-Jaw-Baw-Raw-Law, and they loved it. The process began with mainstream children. It branched out to children with problems, and from there to specially challenged children. It is sad that schools do not yet have theatre in their syllabi. It is a means of expression. It is group activity that can teach children to do things together, build a sense of solidarity, consideration for others, the whole sense of creating something together from colours to costumes. But no one seems to give serious thought to this."

It took Dolly nine long months to train the children for The Merchant of Venice, as they had to work especially hard. "I wanted to instil in them a sense of discipline through the preparation that preceded the rehearsals, because they are specially challenged children and many of them do not even know why they are 'special.' Many suffer from traumas that result in behavioural problems because of problems at home such as divorce between parents. So, to express the character of Shylock or Bassanio or Portia, I needed them to identify similar characters they knew of in real life to be able to identify with the characters in the play." she says.

It was long and difficult, but a learning experience for the Director too. "Parents transfer a lot of their stress and trauma to their children and sometimes, normal children need psychiatric help and medical intervention. But, for me, it was a learning experience and it has humbled me as a person," Dolly elaborates. 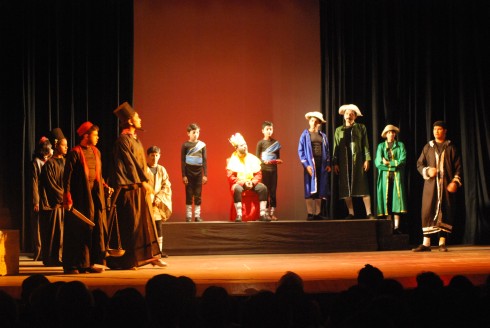 A scene from the play.

As the play unfolded, one could identify a particular child's problem as a relatively severe case of Down's Syndrome, but he came out very well in the play. Dolly also recalls a scene in which either Portia or Bassanio forgot her/his lines, and stood around gaping on the stage for a few moments. But they recovered, and picked up their lines from where they had forgotten them.

"When they came backstage, I could see their eyes well up with tears and they said, 'sorry' to me. Who do you think learns more - they from me through play therapy or I from them?" asks Dolly rhetorically. For her, the creation of this play has itself been a revelation of one of the more famous lines from Shakespeare's original: "it blesses [both] him that gives, and him that takes", says Portia to Shylock, seeking his empathy for Antonio's unpaid debt.

Dolly specifically asked the media not to prioritise the actors' performances in their reviews, with comparative value judgements like 'he was the best' or 'her performance left room for improvement' because "their problems are different in degree and kind, and their ability to imbibe and perform can never be equal. Such value judgements could bring down their self-esteem that is so carefully built up over the entire process of training them towards the performance.

The inspiration to conduct theatre classes for specially challenged children arose from the play Janmadin (1997) based on the childhood days of Helen Keller - in which Dolly's daughter played Keller.

"It was my daughter who made me aware of the tremendous potential these children have. It happened because we were invited by many organisations involved in working with specially challenged children to perform Janmadin for them. The children were not only fascinated but they came forward with tiny gifts. One of them brought an embroidered piece of fabric to gift my daughter with while another gifted her with a painting she had done. She told me - 'I cannot create such beautiful things though I have all my faculties intact. But these children are specially challenged in different ways and no one knows how talented and how creative and how touching they are.' This set me thinking about holding theatre classes for them," Dolly says, recalling how the group was formed nine years ago.

Dolly began studying drama therapy as a science seriously from the time she began her sessions. "It is an on-going process that does not stop and one keeps on learning along the way as one keeps working with children. It is a difficult process where you need to keep motivating yourself all the time so that you can motivate the children you are working with. I have a way with children and I can build a very easy rapport with them. I began nine years ago with six children and now I run three sessions once a week with a total of 46 specially challenged children. I have a separate group for kids between three and six and the other group is between seven and 22. The wide range of the second group is ok, because chronological age does not count for these children," Dolly explains.

What made her choose The Merchant of Venice over other plays more suited to child actors? "It is to familiarise them with the concept of role-playing, that we are all involved in playing roles in our day-to-day lives. For example, I am a mother, actress, director, teacher, therapist, counselor in different phases in life. This involves the wearing of masks. These 'masks' - social, communal, religious, professional, racial, are put together seamlessly in The Merchant of Venice. This is one reason I chose the play knowing the hard work that would go into its production."

Most of the child actors were so good that the audience could not distinguish their performances from those of the mainstream children.

"On the other hand, the play subtly emphasizes human values like tolerance, kindness, liberalism, sometimes inherent in people like Bassanio and Portia and sometimes used as masks by characters like Shylock. The conflict between genuine human values and values faked through masks leads to prejudice that results in injustice meted out to people who have a different belief . social, religious or political. The ones who are pushed against the wall hit back wanting their pound of flesh like Shylock did because he believed that he was victimised because he was a Jew."

So, Dolly used her training sessions with lessons in history, Christianity, workshops conducted by trainers in other fields, followed by rigorous play-reading sessions, helping the children to analyse the morals behind the Shakespearean characters which would help them internalize the characters before rehearsals began. "The biggest lesson I learnt from them is how they helped each other without making value judgements or being competitive. What helped is the parents did not interfere at all and many of them came forward to help in every possible way," she says.

"Theatre has the power to change society. Out of every 100 people sitting there in the auditorium, if we can make even 10 people think about the play for an hour or so after the play is over, we would have achieved something. The underlying thought in each play that Choopkatha presents is . we are not here to preach. What you have just seen is what we believe in. Why don't you too give it a thought? We want you to look at life the way we are looking at it.

"I want a play to be absorbed, not observed. I want my audience to laugh and cry with me, talk with me, there has to be some kind of balance between the actor on the stage, the play being staged and the audience reacting to, responding to, interacting with what is going on. This performance is an endeavour to inculcate within our children the virtue of magnanimity in the true sense of the term. Children participating in this play are aware of each other's special needs and have created together in harmony and mutual respect," Dolly sums up.