Scars of the Green Revolution

Sick soils, declining yields, growing debts and rising malnutrition stalk the Punjab farmer, as the practices of the boom years catch up with him, writes Bhaskar Goswami.
02 February 2011 -

All is not well on the farm-front in Punjab, and things are fast approaching the point of no return. Tasked with producing 20 per cent of the country's wheat, 12 per cent of its rice, and 13 per cent of cotton, Punjab today stands testimony of the disastrous impact of industrial agriculture.

A severely eroded natural resource base is aggravating the already deep crisis in agriculture while farmers and farms are paying a heavy price in terms of stagnating yields and a loss of biodiversity. The agricultural growth rate in Punjab has also slowed down from 5 per cent in 1980s to 1.9 per cent in the 2000s, thereby impacting the incomes of farmers.

A swathe of negative trends

Against a national average of 40 per cent, almost 85 per cent of the State is under cultivation, of which 97 per cent is irrigated. A highly intensive form of agriculture in terms of land, capital, nutrients, water, energy and other inputs is practised in the State. The diminishing size of holdings has forced farmers to increase the cropping intensity, which has risen from 126 per cent in 1960 to 189 per cent in 2009, putting both soil and water under tremendous stress over the last five decades.

Farmers largely rotate crops of wheat and paddy over the year. The area under paddy has increased ten-fold during 1960-2009 while that under wheat two-and-a-half times, all of which are High Yielding Varieties (HYV). These intensive monocultures of wheat and paddy have displaced other crops like pulses, maize bajra, jowar, groundnut, barley, rapeseed, and mustard; crops that were once endemic to the State.

The picture is equally bleak on the livestock front, whose population has declined by 12.7 per cent between 1997 and 2003. The animal diversity is also dwindling and only three breeds each of cows, buffaloes and sheep and two breeds each of goats and poultry predominate. The Sahiwal breed of cattle, Lohi sheep, Nilli Ravi buffaloes and Beetal breed of goat are threatened species. This decline in diversity and numbers of livestock is also an indicator of the erosion of traditional integrated farming practices across the State.

The immediate impact of intensive monoculture cultivation practices is seen on the soils, which face severe degradation due to erosion and salt deposition. Also, the fertility in terms of both macro and micro-nutrients has declined steadily. This in turn has pushed farmers to apply larger doses of chemical fertilisers whose consumption has increased eight-fold in the last 50 years. After Andhra Pradesh, per hectare application of fertilisers is the highest in Punjab - almost double the country's average, and rising. Yet, yield levels are stagnant.

The fact is, sick soils have lost their ability to respond to inputs like fertilizers, a reason for stagnating productivity. This decrease in response indicates that the organic carbon content and microbial activities in the soil, which are critical for crop development, have declined. While dying soils should have evoked concern decades back, all that is on offer now are further interventions that aim to promote more of the external input-intensive farming that in the first place caused the problem. 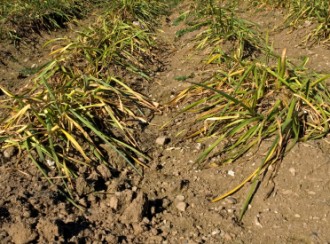 The immediate impact of intensive monoculture cultivation practices is seen on the soils, which face severe degradation due to erosion and salt deposition.

•  Poison in their veins
•  The virtual water trade

The reckless application of chemical fertilisers has contaminated water bodies. A November 2009 study, Ground Water Quality for Irrigation in Punjab by government bodies reported that 42 per cent of the groundwater has saline and sodic elements. Forget drinking, these are unfit for irrigation. The Malwa belt is the worst affected with 60 per cent of contaminated water resources. Another study of farm wells by Greenpeace in 2009 reported nitrate contamination of drinking water way higher than permissible limits in the districts of Ludhiana, Muktsar and Bhatinda.

Another practice that is affecting soil fertility is burning of post-harvest straw on croplands that produced it. This is ostensibly done to ensure early readiness of the fields for the subsequent crop. The State produces around 230 lakh tonnes of paddy straw and 170 lakh tonnes of wheat straw each year. Of this, almost 80 per cent of the former and half of latter are burned in open fields. Apart from ruining soils, this is a major cause of air pollution and emission of greenhouse gases, which impact cultivation and yields.

Similar to the trend in fertiliser application, the consumption of pesticides has also increased in Punjab. Pesticide consumption in the State stood at 923 grams per hectare in 2006, which pegs a Punjabi farmer in the very-high-use bracket. Large scale application of pesticides is increasing pest resistance. Going by numerous peer-reviewed papers and news reports, pesticide residues have been recorded in human beings, water, milk, vegetables and several other food products that are way higher than permissible limits.

Incidence of cancer and other ailments have reached alarming levels and huge numbers of farmers and their families from the Malwa region regularly travel to Rajasthan for treatment of cancer. Newspaper reports also point to children as young as 10 looking old with peppery hair and suffering from arthritis.

Planting HYVs has also increased the demand on water for irrigation. As per the State Department of Soil and Water Conservation, agriculture requires 43.7 lakh hectare meters of water. Surface canals provide 14.5 lakh ha-m and ground recharge supplies 16.6 lakh ha-m; the balance 12.4 lakh ha-m is met through overexploitation of ground water. As a result, groundwater levels are reducing by almost 30 cm each year. As per the Department's figures on its website, there are about 10 lakh shallow tube-wells and 3162 deep tube-wells in the State, mining water to irrigate a net area as high as 41 lakh hectares. All this notwithstanding the first "temple of modern India" - the Bhakra dam - meant to quench the thirst of Punjab's farmlands.

As per the figures of the Soil and Water Conservation Department, of the 17 districts in the State, groundwater in eight are overexploited, three are in the grey zone while the remainder fall are considered safe. If one were to look at the prevalence of crises in groundwater down from the district to the block level, almost 53 per cent of the blocks in the State are in the 'overexploited' category, eight per cent in the Dark Zone, and 16 more blocks fall in the Grey Zone, thereby leaving only 38 per cent of the blocks in the relatively safe White Zone. Clearly, this level of extraction is unsustainable.

The Green Revolution also ushered in a rapid adoption of farm mechanisation technologies. To illustrate, on the one hand the average holding size is shrinking while on the other the sale of tractors is increasing. The State accounts for almost 14 per cent of tractors in the country, which is double the numbers that are actually required. This is nothing but overcapitalisation in farm mechanisation and its underutilisation which is adding to the debt burden of farmers. Increasing amounts of debt money is being spent on farm machinery, and this has increased from 15 per cent in 1997 to 53 per cent in 2008.

On indebtedness, a recent study by Dr. H S Shergill from the Institute for Development and Communication, Chandigarh, has tracked and analysed farm debt and come up with distressing figures: it has grown from Rs.5700 crores in 1997 to Rs.30,394 crores in 2008, a five-fold jump in a decade. The rate of growth of farm debt in the last 10 years for Punjab is faster than farm incomes, which in itself is an indicator of the gravity of distress in agriculture.

What is equally shocking is that the debt amount as a per cent of net income has increased - from 68 per cent in 1997 to 84 per cent in 2008. The Shergill study points out that 72 per cent of farm households are heavily indebted while 17 per cent are virtually in a debt trap, unable to even fork out interest payments from their current farm income.

With the affluence of the farmer in Punjab waning, the quantity and nutritional quality of the food being consumed by households are also downbeat. As per the International Food Policy Research Institute's India State Hunger Index, while Punjab is the best performing State in the country, it ranks below 33 other developing countries, including Gabon, Honduras, and Vietnam. The National Family Health Survey report of 2005-06 reveals an equally sad picture of the state of health: one in every five adults in the age group of 15 to 49 years suffers from malnutrition in Punjab. That this is the state of health of people living in the proverbial granary of the country suggests how rest of India is faring.

There still is time and opportunity to undo this industrial approach to farming and usher in an honest "Green" farming model in Punjab. This is all the more important as the "Punjab Model" is now being recommended for replication across States that the Green Revolution bypassed in its earlier avatar, by none other than the Working Group on Agriculture Production. If that is to be the future prescription, nothing could be more disastrous for Indian farms and farmers.

Bhaskar Goswami is with the New Delhi based Forum for Biotechnology and Food Security.