Amma Meri (2017) is the second short film directed by Tarun Jain. Tarun Jain is an internationally acclaimed filmmaker based in Delhi. His method is provocative. His ability can be measured by the way he visualizes concepts.  His first short film Aakhir (At Last, 2014), has been screened at over 45 International film festivals and bagged around six awards. Amma Meri is his second short film as a writer, director and producer. He has been involved in fiction, documentaries, corporates films, television shows and TVC’s over the years. Amma Meri (Mother) was selected for screening at the Prism Section (National) at the Mumbai International Festival of Documentary, Short and Animation Films. 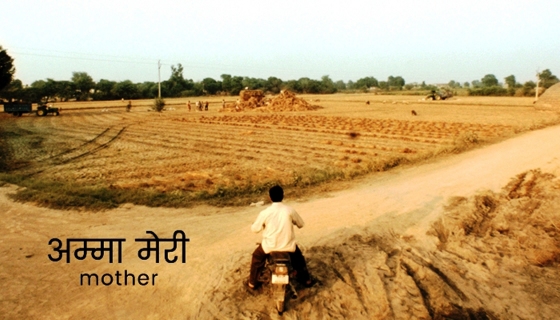 Within its brief span of 30 minutes, shot in colour at Baghpath in western Uttar Pradesh, in actual locations, Amma Meri narrates the story of how Balram, an impoverished, middle-aged son burdened with financial troubles tries to negotiate his way through life with a very old and sick mother, an unmarried daughter, his job of distributing milk in the village and the gossip around his frustrated spinster daughter; when his father dies suddenly.

The film opens on a wide, distant horizon against a setting-sun sky as the camera offers us a dark glimpse into a man, captured almost in silhouette, collapsing on the road. It then cuts into the reality of the death of Balram’s father who was burdened by heavy debt and the responsibility now falls on the shoulders of Balram. Balram is a handsome man, strong of build and wide shoulders which stands in radical contrast to the plight and the tragedy his life defines. His masculinity is sucked by his sad destiny and also the environment that is replacing agriculture with construction trying to change the village scenario into a city with its associated ills for the residents.

Tarun Jain says that Amma Meri was the result of years of research he had done when he was associated with other projects mostly shot in parts of Uttar Pradesh and Haryana. His work during breaks in the shoot and along the journey was to observe the local people in their normal lives and sometimes interact with them. Besides, having spent most of his life in Delhi and his family and friends living in these regions gave him a direct connection to his subjects in Amma Meri.

Was this based on a true story? Says Jain, “Once I was travelling in the hills of Uttarakhand. After travelling the entire night, we stopped at a highway food joint. Soon, I was disturbed by the sounds of a motorbike driven by a man in his fifties and an old woman in her seventies who halted at the food joint. The man, who looked quite angry, asked the old woman to sit on the cot in the dhaba as he washed his face. The old woman was tired and her hair was all messed up. Then, after a respite, they rode away on the bike. But before the old lady could comfortably fit herself on the seat, the man sped up suddenly. I noticed that their relationship lacked warmth. The old woman could not express her extreme discomfort though I could see it quite plainly. Suddenly, a question struck me - what if the bike met with an accident on the way? This gave me the germ of an idea on creating some intensity between these two characters in my film and what would happen then.”

The film has several layers that point out repeatedly, in different ways, what poverty can do to an entire family and how the death of the senior most member can place the entire balance of the family in complete jeopardy. Instead of allowing space for grief, this leads to a greater crisis in the family specially for Balram, the son. The loud sound of a running pump within Balram’s small home is a metaphor for the disturbed home environment where the mother is almost paralyzed, mentally if not physically, the daughter is planning to run away with a lover and the wife is trying her best to make do within all this. When Balram begins his round of distributing milk which seems to be his main occupation, his customers, known to him, either suggest matches for his daughter asking for a huge dowry or fill his ears with gossip about her clandestine affair. The pace of the camera and editing suits the rhythm of the story and the rural environment quite well. 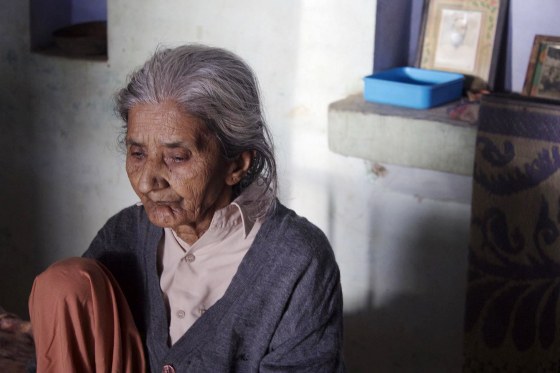 A still from the film. Pic: Tarun Jain

But the scenes which show Balram driving on his two-wheeler through the rough roads, farmlands and wide fields with his very weak and ailing mother on the backseat who totters and threatens to fall any minute are the ones that are filled with suspense of what will happen next. Will she fall and die or will the son take care of her and ride her back to safety? Why is he taking her to the office for her thumb impression on the fixed deposit so that Balram can inherit the sum while she is alive is explained through an agent who tries to make a fast buck.  Her thumb impression is the only escape route for Balram from poverty, from an unmarried daughter who he is aware is having an affair, and save his life for the time being.

On his way back, he can feel his old mother running out of breath as she totters on the back seat and this becomes the cornerstone of the film handled with great restraint by Jain. He uses very little dialogue in the entire film and silence plays a significant role with its eloquence. The elopement of the 25-year-old unmarried daughter is captured within a few, intelligently edited shots, with her face registering her disgust and acknowledgement of her wretched life at one go. What happens in the end ought to be kept under wraps because it is not very predictable.

Anurag Arora as Balram gives a sparklingly spontaneous performance and so does Devki Rani as Amma. Karan Thapliyal’s camera is in keeping with the pace, subject and setting of the film. The cinematography plays around not only with the picturesque setting of the rural landscape though long shots and mid-shots but also plays around with close-ups to catch the characters’ mindscapes as it rests for a while on the face of the absolutely silent mother, or the daughter Rashmi decking up in front of a small mirror, or coming to rest on the worried face of the bearded Balram as he rides through the landscape on his two-wheeler or mid-shots capturing the interiors of his clients who are also his fellow-residents or the mother helped to place her shaking thumb impression with help from her son on that telling document that promises a better future for him.

Editing by Vishal Chauhan and Rajan Kumar Singh is seamlessly woven into the changing moods of the ambience, the characters and the story.  For example, when the camera cuts from the sudden collapse of the old man in the fields to his house where his body lies covered in a white sheet, one can only hear soft sounds of weeping then cut to the frozen face of the expressionless mother, looking out at nothing. 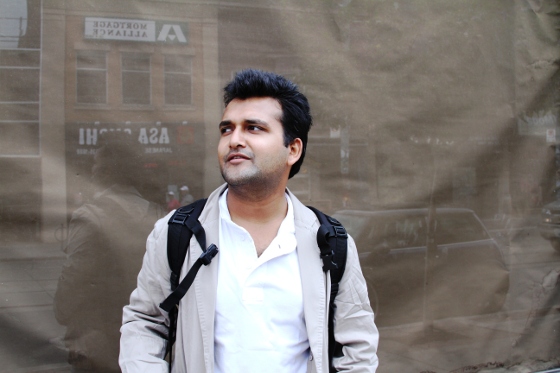 Tarun Jain, the director of the movie. Pic: Tarun Jain

Savitha Nambrath and Kingshuk Moran’s are the sound editors and Shajith Koyeri is the sound designer of the film. Nambrath and Moran’s sound editing is imaginative and adds to the comment the film tries to make while Koyeri's sound design is more suggestive than concrete. The sounds of construction where construction is happening, the repeated sounds of the motorcycle which Balram drives through the fields and roads, sounds of traffic which can mostly be heard and less seen, the sounds of the exhaust fan inside Balram’s residence, the sound of a fleet of crows flying away into the horizon establishes a rich soundscape without any songs or background music.

“The inspiration to make such a film came from the fact that I have constantly challenged myself in doing some good work. After my first short film Aakhir, It gave me a lot of confidence and challenged me to do better work. I remember someone once told me, 'if you do average work your work may get lost in the crowd, if you do good work your work will be appreciated, but if you do your best, it would be impossible to ignore you' and that has remained with me ever since,” says Jain.

He found Amma Meri very challenging because, “I was questioning the most sacred relationship of a mother and a child. While writing the script, I was thinking constantly about the back story. What drives such stories or incidents? What must have been Balram’s journey, the real one, as he is a microcosm of the hundreds of young men and women defined through a single character? What were his expectations from life when he was growing and what were they like now? This happened when the agrarian crisis was considered a significant step that drove peasant families to the edge of survival. Through the story, I wanted to question how it had affected the health, the minds and the living of the people and how prosperous lands have succumbed to deaths, debts and hopelessness forever.”

The fact that Amma Meri did not win any awards at MIFF 2018 is indeed, a pity. But it is certainly going to pick an award or two at other festivals.

Note: The article has been updated to reflect the correct sound editors and sound designer.