Rail travel for the disabled: Learn from the world

Attention to international benchmarks, awareness of rights and proactive provision of basic facilities could make train journeys a less stressful experience for physically challenged passengers in the country, says Malini Shankar in the second part of her series.

We saw earlier how inadequate the infrastructure of Indian Railways is to cater to the needs of physically challenged people. The inadequacies and entrenched insensitivity towards physically handicapped (PH) passengers become particularly stark when one looks at international benchmarks and standard best practices. In many other parts of the world, train travel is a lot more comfortable for passengers with special needs, with such service being a courtesy extended by the railway authorities.

For example, throughout Europe, where rail networks are extensive and travel by rail is common, the level of the platform and the train is the same. This helps to usher in wheelchair bound passengers. Perambulators, stretchers, cycles, shopping carts can all be wheeled in with equal ease. According to the Passenger rights Rail - legislation in force in the EU from December 2009 "Railway companies shall provide disabled persons and persons with reduced mobility with assistance on board a train and during boarding and disembarking from a train free of charge". (http://ec.europa.eu/transport/themes/passengers/rail/index_en.htm)

Thus, stations in Europe and North America have automated doorways with scanners that facilitate easy transit for wheelchair bound passengers. Ramps, escalators, elevators, luggage escalators are all easy to use and widely distributed/accessible across stations. In addition, many other facilities used in stations . from ATM machines, ticket vending machines, toilets to restaurants, book stalls, souvenir shops and consumer durable shops - are all designed to cater to the needs of physically challenged passengers.

According to a press release of the EU Transport Commission issued on 11 March 2013 "The European Commission is making accessibility an essential requirement for rail infrastructure when newly built, upgraded or renewed." Accessibility can be achieved by preventing or removing barriers and through other measures such as provision of assistance. The rules apply to infrastructure (e.g. obstacle-free routes, ticketing, information desks, toilets, visual and spoken information, platform width and height, and boarding aids) and to rail carriages (e.g. doors, toilets, wheelchair spaces, and information).

"Making rail transport more accessible to everyone is at the heart of our strategy for a high-quality, sustainable transport system in Europe", says Vice-President Siim Kallas, EU Commissioner for transport. "This change represents the first in a series of actions by the Commission this year to further improve access to transport for people with disabilities and persons with reduced mobility in Europe. It establishes a direct link to EU-level technical specifications for rail accessibility already available and sets an example of good practice for other modes of transport. It also demonstrates the EU's commitment to meeting its obligations under the United Nations Convention on the Rights of Persons with Disabilities."

Along with the physical provision of facilities and infrastructure, sensitising society to the needs of challenged or differently-abled persons is a critical requirement. Often, it may be merely a question of raising our voices or demanding what we need.

Moreover, according to the Summary of EU legal provisions on rail passenger rights "There is no financial limit on the liability of the railway undertaking for loss or damages to mobility equipment: in this case, the liability covers the total or partial loss of, or damage to, mobility equipment or other specific equipment used by disabled persons or persons with reduced mobility."

A long way to go

Clearly, Indian Railways has miles to go to catch up, whether in terms of facilities mandatorily required for physically challenged persons or the infrastructure needed to facilitate ease of access and use. A review of the many things that are done for passengers with disabilities in other countries can provide a starting list of things Indian Railways needs to do too. 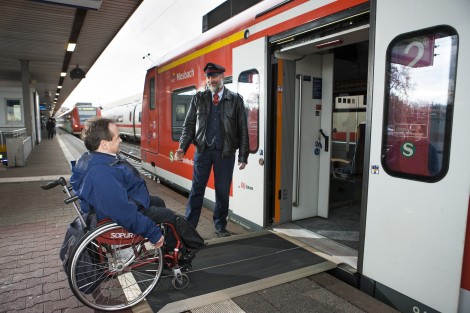 Courteous trained personnel on bard and state of the art infrastructure make rail travel user friendly for mobility impaired passengers in the European Union. Such ramps, in fact, are useful even to able passengers; it is common to see people struggling to load luggage on to trains throughout India. Photo: Courtesy of Deutsche Bahn AG through the German Consulate General, Bangalore.

Along with the physical provision of facilities and infrastructure, sensitising society to the needs of challenged or differently-abled persons is a critical requirement. Often, it may be merely a question of raising our voices or demanding what we need, as the following personal experience would illustrate.

In September 2011, I was travelling with a foreigner as my accompanying passenger. (I am physically challenged and am eligible for take along an accompanying passenger at concessional rates). I had to board a Bangalore-bound train in the dead of the night in Haveri district in Karnataka, at a station which had only two platforms. As soon as I arrived at the station, the usual obstacle resulting from a lack of facilities for carting the luggage across the rail bridge had to be overcome by the graces of a kind taxi driver.

When I learned that the train I had to board would arrive in the dead of the night at Haveri, and stop for only 2 minutes, I panicked because I was nervous about my ability to board a train with luggage and accompanied only by a foreigner unfamiliar with the system. I braved it to the station master's office and told him of our pathetic situation. I requested the station master to radio a request to the train driver that a PH passenger with a foreigner has to board a train at 11.50 pm; given my difficulty, I requested the train to stop for five minutes more than scheduled, if required.

I had mentioned our ticket numbers and train car details, which were then radioed. We were instructed to stand at a point on the platform where our train car was expected to park. As the train rolled into the station at around 11.48 pm the ticket collector stood at the door of our train car calling out for passengers on the seat numbers assigned to us. This was heart-warming for both of us.

I headed to the entrance of the train car identifying myself as the passenger who had made the request. After we boarded, the ticket collector radioed to the Station Master that we were in, safe. To our pleasant surprise the station master was standing on the platform, near the guard car, monitoring our boarding. Within minutes, the all-clear signal was given and the train chugged off. There was no need for extra time at all.

This incident proved to me that PH passengers only need informed and aware authorities and bona-fide requests can be realised without much ado. Of course, it takes both PH passengers and reasonable, approachable authorities to make it happen. Not all PH passengers in India have the self-confidence to make such a request. The first step towards building this confidence is creating awareness of their rights.

It would still require a lot of thought and carefully considered moves to address certain other priority issues associated with train travel in the country, for example, the transit of critically ill patients. However, the simple measures discussed so far would go a long way in creating a more humane, inclusive means of transport for a large section of the people.

It has to be acknowledged that Indian Railways caters to the needs of millions of middle class Indians, but given the challenges faced by people with disabilities and impaired mobility, these measures would help improve efficiency and leave such passengers less stressed-out after an exhausting journey, encouraging them to travel by train more often.