Rays of hope for the ‘local’ in Meghalaya

Even as many pockets of the state, including its capital, battle the ravages of development and consumerism, a couple of villages visited by the author stand as examples of resilient local economies and lifestyles. Aditya Vikram Rametra describes what he saw here.
19 March 2016 -

Meghalaya is a delightful, hilly state carved from the erstwhile state of Assam in 1972. Fabled for its waterfalls, and the lush green landscape, the state is rather sparsely populated; the population density being just a little over 100 people per sq. km. Bounded on the north and east by Assam and on the south and west by Bangladesh, Meghalaya is spread over an area of 22,429 square kilometers, over one-third of which is still pristine forests.

Meghalaya's main ethnic communities, each having its own distinctive customs and cultural traditions, are the ‘Khasis’ (of Mon-Khmer ancestry), the ‘Garos’ (of Tibeto-Burman origin) and the ‘Jaintias’, said to be from South East Asia. The common trait binding all three communities is the matrilineal system in which the family lineage is taken from the mother's side.

As one travels through the state, one is struck by the natural beauty of the landscape, but it is hard to miss some of the modern day calamities of ‘development’. Shillong, the capital city, is bursting at its seams. There are water shortages in some areas in the dry season.

As I travelled to the countryside, I noticed entire hill slopes being chopped off for quarrying of limestone, and quartz. There is a cash crop (in fact a wild grass, that quickly spreads over the entire landscape!), called ‘Bromus’ (generic name), which is used to make brooms. This menace has spread like wildfire, with the potential of every poor household earning some quick money acting as a powerful incentive.

Holding their ground against such evident collateral damages of development are a couple of villages that spell hope for the ecology, localisation and sustainable progress.

I visited Nongtraw one fine, sunny day in March. My hosts and guides were a young, dynamic team of NESFAS, the North-East Slow Food & Agro-biodiversity Society. Established in 2012, NESFAS emerged as an outcome of the collaborative activities between the Indigenous Partnership for Agro-biodiversity and Food Sovereignty (The Indigenous Partnership) and Slow Food International. NESFAS is a platform to promote the importance of local agricultural practices for livelihood and well-being of local communities. 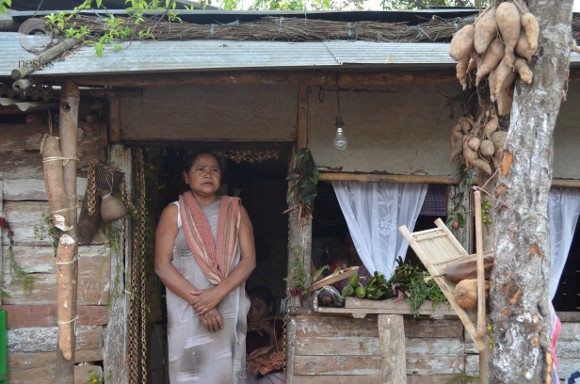 Nongtraw is a picturesque village nestled in the East Khasi Hills, some 45 kilometres from the state capital, Shillong.  The village, which is situated at the bottom of a steep valley, can only be reached by climbing down 2,500 steps. So the fun begins right there! It takes a good one hour to get down to the village, and longer to get back up. And while the visitors crib and groan, the local lads go up and down as if it’s a piece of cake!

These steps were made under the MNREGS, the central government scheme that provides 100 days of paid manual work in a year to every household. It’s not only a testimony to the fair and productive implementation of an excellent government scheme, it’s also a testimony to the never-say-die spirit of the people of Nongtraw. To survive in a difficult terrain in all the different seasons is a remarkable achievement. While climbing down the steps, one stops every now and then to catch the beautiful, awe-inspiring views!

On reaching the village, we are greeted by virtually the whole village – men, women, children, and infants! One is immediately struck by children – happy, healthy bundles of joy!

The next thing one notices is the general cleanliness of the surroundings (in contrast to some of the areas of the capital city, Shillong). There are hardly any milch animals; I couldn’t see any cows or buffaloes.

The village is not very old; it all began in 1963 with three families. Nongtraw comprises of 40 households with a total population of 280 (2011 census), all belonging to the same tribe ‘Khasi’, but to different clans within the tribe, namely, Ranee, Dohling, Diengdoh, Khongsit, Nongrum, Khonglam, Riahtam, and Khongngain. The people of Nongtraw are deeply connected to their lands, and their primary occupation is agriculture.

There are a few areas where Nongtraw is a pioneer:

While there are fierce debates on the pros and cons of ‘jhum’ cultivation, what often gets ignored is the community’s perspective and learning over the years. NESFAS has been working closely with the communities to improve on the ‘jhum’ cycles and methodology, rather than junk the whole ideology in one go! The current fallow cycle followed is nine years; and while preparing the fields for cultivation, only the branches of the trees are cut, leaving behind the trees.

One of the women pioneers in the revival of millet cultivation is Kong Bibiana Ranee, a community leader who hails from the village, and is now a Board Member with NESFAS. Kong Bibiana is an active advocate of local food and traditional agriculture. She was invited for the international Terra Madre event in Turin in 2010 and 2012 and also participated in the first Indigenous Terra Madre held in Jokmokk, Sweden. Today her village grows several varieties of millets, the finger millet being the most popular. 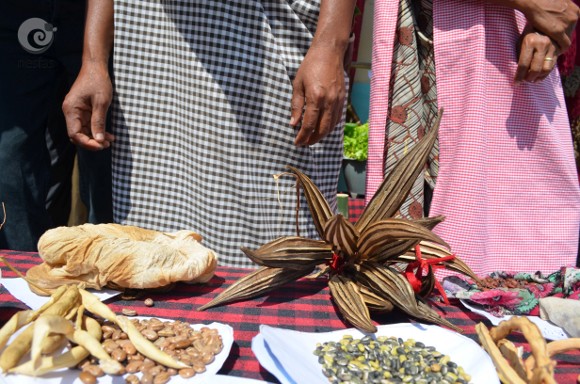 Besides agriculture, the people are also involved in Beekeeping, Piggery, Local Poultry and Bamboo Handicraft. While honey and most vegetables find an easy market, it is quite a challenge to work on the processing and marketing of millets. Changing consumer tastes add to the challenge. NESFAS is currently working with the communities to market their produce more effectively. The village has recently received a millet de-husking machine donated by the Meghalaya Rural Development Society (MRDS). The day-to-day operations will be overseen by the Village Development Council (VDC).

Nongtraw is also a good example of successful implementation of Government schemes - a result of communities working closely with the Government. Apart from the construction of 2,500 steps under MNREGS, the village is self-sufficient in water. There are eleven common water taps that provide convenient water supply to all the households.

There is a well-functioning ‘Anganwadi’ center, an Integrated Child Development Service (ICDS) center, and voila - a football field! Lastly, Nongtraw is a recipient of the ‘Nirmal Gram Puraskar - 2011’, an award-based Incentive Scheme launched by the GOI for fully sanitized and open-defecation-free Gram Panchayats, Blocks, Districts and States.

I was lucky to visit Khweng the following day. Khweng is a village in Ri-Bhoi district of Meghalaya, and is situated at a distance of 40 kilometres from the capital city, Shillong. Mainly inhabited by the Khasi community, the village is comprised of a hundred households with a total population of six hundred. 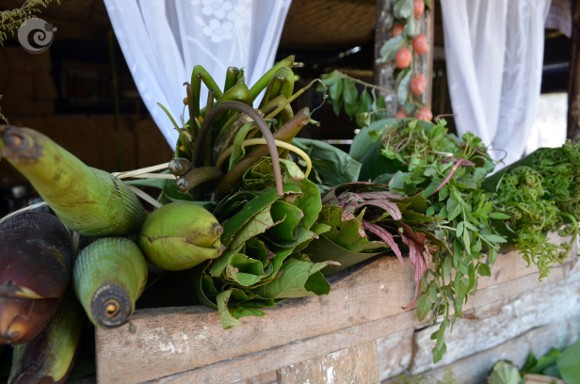 Agriculture is the main vocation and the preferred method is ‘jhum’ cultivation. Biodiversity mapping exercises have revealed a wide variety of fruits and vegetables grown / found in the region: ginger, turmeric, yam, tubers, pumpkins, beans, wild vegetables, cereals, lentils, roots, several varieties of local fish and fruits, etc. There are some 20 varieties of yam alone! Similarly at one point of time, there were some 17 varieties of rice grown in the village; a few varieties have now disappeared.

Like everywhere else, there is a threat to traditional and subsistence agriculture; therefore the need to strengthen the community and its linkages to food and farming practices. This is precisely where creative, non-imposing, and empowering collaborations with the local communities can make a difference.

A Participatory Rural Appraisal conducted jointly by the International Centre for Integrated Mountain Development (ICIMOD) and NESFAS helped sensitise the community to their vast, undocumented biodiversity heritage, and the need to preserve it. Women take the lead in preserving and promoting this.

NESFAS has identified two custodian farmers - Kong Redian Syiem and Kong Diamond Sakra (Note: In Khasi language, ‘Kong’ means sister, and ‘Bah’ means brother). These ‘custodian farmers’ are trained to preserve, promote and adapt the traditional crop varieties to the local ecology. Between them, the two grow over 80 varieties of crops in their fields!

There are also some active self-help groups (SHGs) in the village, who are involved in food processing activities. Using the local produce imaginatively, the SHGs have come up with products like ginger candy, bamboo pickle, local fruit syrups etc.

Another hallmark of the village is the active ‘Eri’ silk rearing and weaving culture. Eri rearing is very common in the community, with most households rearing the worm during the autumn season i.e. the months of September and October, before the harvesting of paddy. Weaving provides an additional source of income for some families. 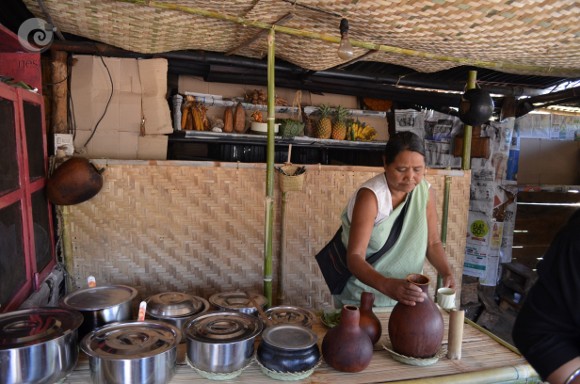 Interior of Mei Ram-ew café with its proprietor. Pic: NESFAS

What I found most unique in the village was the ‘Mei Ram-ew’ café, or the ‘Mother Earth’ café. The café is the initiative of one of the active community members, Kong Plantina. The concept of a ‘Mother Earth’ café is simple but powerful - it links the local natural produce to tasty, wholesome food on the table.

The day we visited was also the day that the café was inaugurated by the Director of ICIMOD. Essentially a mud and bamboo structure, the café has a rustic and charming look. Kong Plantina, ably assisted by NESFAS, has come up with an array of imaginative, wholesome dishes that are affordable for the local population.

As Phrang Roy of NESFAS puts it, ‘there is a need to glamorise the local slow food’, in order to wean away the youth from the fast food junk served elsewhere.

Prioritising and preserving the ‘local’ – that is what the Mother Earth café in particular, and Khweng in general teaches us.

Source for facts, figures: Government of Meghalaya and  NESFAS

Aditya Vikram Rametra is a freelancer interested in Ecology and Social Development.

This is an abridged version of an article first published by Vikalp Sangam, a website that showcases alternative sustainable initiatives – practical activities, policies, processes, technologies, and concepts/frameworks – practised, proposed or propagated by communities, government, civil society organizations, individuals. The original text of the article can be read here.