Is India likely to hit the ambitious targets set for the growth of renewable power generation? A compilation of data from different sources by the Prayas Energy Group shows what's working well and where greater efforts are needed.
24 August 2019 -

During the last decade India has seen big changes in its renewable energy sector, particularly with regard to capacity addition and prices. The country has set a target to produce 175 Gigawatts (GW) using renewable sources by the year 2022. Although renewable energy has social, economic and environmental benefits, the process of reaching this target will be challenging for the power sector.

How are we doing so far? Is this goal within reach? Prayas (Energy Group) has collated important data already available in the public domain, and reported it in their Renewable Energy Data Portal. The portal offers an ongoing assessment of the emergence of renewables, and the likely timelines for a largely green energy-powered economy in the future.

According to annual reports published by the Ministry of New and Renewable Energy, the growth in renewable energy capacity from various RE sources has exponentially spurred over the past years. The different sources of RE are bio power, ground-mounted solar, rooftop solar, small hydro, waste to power and wind. Of these, wind accounts for the largest share - having grown from 8,757 MW to 36,368 MW (March 2008 - June 2019) and waste-to-power has seen the least change in capacity (from 90 MW to 138 MW over 7 years (March 2012 - June 2019). Ground-mounted solar capacity is a rapidly closing second to wind capacity, having grown even more impressively from a mere 3 MW in March 2007 to 27,499 MW  in June 2019. 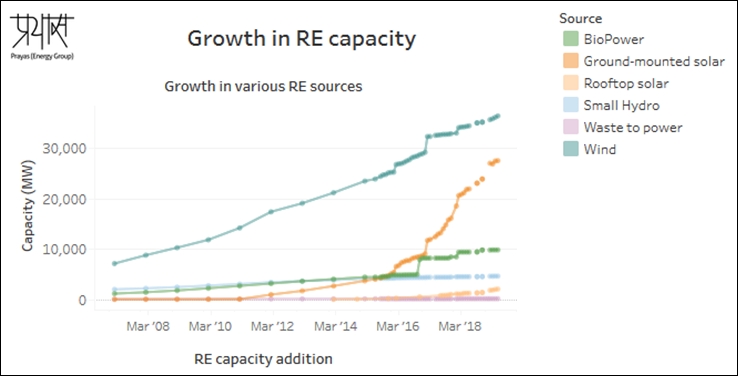 The data allows us to review how well we've done on the targets set for each source of RE over many years. Ground-mounted solar capacity addition has been consistently close to the set target throughout, and it is likely to reach the 2022 target of 60,743 MW. Rooftop solar, however, has failed to reach target its capacity addition target except in 2016, and its 2022 target of 40,000MW (2022) can be reached only if significant measures are taken to do more on this front.

There is also a large spread in how the different states have fared in this transition. A few states have taken much of the lead; Karnataka and Tamilnadu are at the forefront of RE capacity, with Maharashtra in third place. In many of the better-performing states, however, a significant share of RE is from micro-hydel; this is a segment that isn't growing much, and the states with the strongest focus on ground-mounted solar and wind that may see the maximum additions in RE capacity in the coming years.

While the growth of RE has been impressive, conventional sources of power still acount for 80.8% of the capacity, and more importantly, they account for just under 90% of the actual energy generated. The plan projections for the future also envisage a tipping point - where RE will account for more than half of the energy produced - that is still a decade away; even this could prove difficult, judging by the price impacts from RE that are already noticeable.

The tariffs for solar PV winning bids in different states have fallen dramatically, from ₹8.36/kWh in 2012 to ₹2.50/kWh in 2019. Winning bid tariffs for wind energy are also falling - from ₹3.46/KWh in 2017 to ₹2.90/kwh. This makes energy cheaper for consumers, but makes producers rethink some of their plans. As tariffs for RE continue to fall, and the share of RE in the overall power sector grows, both conventional and renewable energy projects are staring at lower profitability. Coal-based plants are particularly hard hit, with a number of stalled projects unable to source coal at low enough prices to be competetive.

Prayas Energy Group's compilation of the data on renewable power holds up a mirror to the publicly stated goals for renewable energy in the country. Clearly, there is significant addition of RE power, and equally clearly, there is still much ground to cover before green power becomes the mainstay of the economy. Along the way, there is a risk of being tripped up by the speed at which prices are dropping. The energy portal is must-stop-and-check site in periodic reviews of this complex reality.