A far-sighted educational trust is reaping the benefit of digging recharge wells long before the need for them. While its own decision is a lesson in conservation, the institution is also going further, imbibing ecological concerns into the students too. Shree Padre reports.
16 December 2007 -

Usually, people conserve water when they are forced to, during shortages. It is rare to find those who decide, with foresight, that they will take up conservation long before they are faced with any difficulty. Vagdevi Vilas Educational Institutions at Munne Kolalu, near Bangalore, is one such exception.

The three-year-old institution, with a total student count of 2300, is located on an eight-acre plot. There is a reliable supply of water that is available from the two bore wells that were dug initially. Yet, chairman of the institution, K Harish was not content. He had had five rain pits dug at strategic locations on the premises, to ensure that most of the run-off is returned to the earth's womb. These structures, though they are called rain pits, are in fact a kind of percolation (recharge) wells. Instead of digging an empty well, the school authorities have filled the cavity with layers of filter media. Sixteen feet deep, about four feet in diameter, lined with cement rings. Run-off from the storm water drains is emptied into these wells.

The annual rainfall in this area is 900 mm, meaning that each acre of land receives 36 lakh litres of water every year. Observes Harish, "Six acres of our campus are zero run-off areas. Only when there is an occasional heavy downpour, water flows out from the campus." 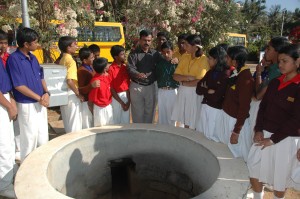 The percolation has paid off. This year, five more recharge wells were dug, two of them very near the earlier ones. What surprised everybody was that these two wells struck water at 18 feet. Recalls Harish, "It was 20 May when we started digging these wells. The early summer rains hadn't yet arrived. In one well, we got half a foot and in another there was one and half feet of water." In other words, these recharge wells have touched the water table.

That's remarkable, considering how much recent increases in pumping of groundwater have reduced the overall ground water levels. At the Lakshminarayana temple half a kilometre away, the 30-feet-deep open well has dried up. But here in the school campus, water is available at little more than half the temple well's depth.

Lessons from an earlier battle

Why did a brand new institution still developing necessary facilities like buildings and other amenities decide to harvest rain despite having adequate water? The answer lies in a lesson learned from an earlier battle.

There is a huge, centuries-old tank - kowdenahalli gangadharabhattana kere - in Ramamoorthinagar locality, where Harish lives. To save this tank from encroachment, a long-drawn social and legal battle was fought by the local citizens' committee since the 1990s. Harish was among those who led this agitation. "Thanks to our efforts, if the open wells have water in our Ramamoorthinagar today, it's because of the saved tank," he says. This experience made him very conscious about water conservation, and he decided that he would be fore-armed with reserves of water for the school, and pre-empt any scarcities.

A boom in recharge wells

Though there are thousands of yielding open wells in the city, the habit of digging new open wells had come to a halt in recent years. Now, thanks to the interest in rain harvesting, especially by organisations like locally-based Rainwater Club, many institutions and corporate houses are opting for open wells only meant to put the rainwater in.

S Vishwanath of Rainwater Club, a strong advocate of recharge wells, suggests: "Recharge wells might be included as part of the new construction design itself. Depending on the diameter and depth, digging a new well costs anywhere from Rs.8000 to 12,000. The capacity of a recharge well of one metre diameter and six metres depth is about 5000 litres. In a year, anywhere between one lakh and 10 lakh litres can be recharged by a single well."

At the Lakshminarayana temple half a kilometre away, the 30-feet-deep open well has dried up. But here in the school campus, water is available at little more than half the temple well's depth.

Though the initial expenditure appears high, recharge wells are better for bigger premises because they have more recharging capacity. The standing water column inside the well also exerts hydraulic pressure, making the percolation faster. It helps in making bigger premises zero run-off. More than 1500 recharge wells have been dug in the city. They are ideal for big individual households, apartments, layouts, industries and institutions. Members of local Bovi community are experts in digging such wells. Three to four members finish the job in two to three days.

Three years ago, when the boom in recharge wells had just begun, Vishwanath had expressed a hope. "If more and more people make their premises zero run off and the water table is consciously brought up by communities, who knows, why can't a recharge well start acting as a service well too?" He was dreaming of a day when water tables would be high enough that the recharge wells, meant for depositing water into the ground, begin giving back water, even if only for a few months each year.

The dream has now been realised in this sprawling campus of Munne Kolalu. Although it is December now, one of the recharge wells still has about 12 to 18 inches of water, but nobody is regularly using it. Harish has tasted the water; he says, "it tastes like any other soft water from a well."

This year, before the monsoon rains arrived, a huge underground rainwater storage tank was built at Vagdevi campus. This is fed with the roof water from the buildings on the campus. The school has distributed handbills on the subject to all the students' homes. On the day the tank was inaugurated, students took a procession in the area shouting slogans on rain harvesting. A slide-show on the subject taught them more. They intend to use the stored water for irrigating the garden and the trees.

The school also gives importance to making the students water-literate. The school prospectus contains a message about rain harvesting. Quiz and elocution competitions are held to sensitise students on the subject. Apart from all these formal efforts, Harish and his wife Vasantha leave no opportunity to teach small student groups the necessity of conserving water. Nor is water the only focus; their aim is to instil a broad eco-literacy in the young minds amidst their hectic school activities. Hundreds of trees are planted in the campus each one carrying its biological name. Students are also taken to see the cattle sheds, vegetable kitchen garden, and the school's own Butterfly Park. In the near future, the school will also install some rain barrels, to educate and inspire students about the instant use of rainwater.

Shree Padre is a journalist with many years of experience in agricultural reporting. He is the author of several books, including one on rainwater harvesting, published by Altermedia. Vagdevi Vilas School can be reached Munne Kolalu, Marathahalli Post, Bangalore 560037. Ph: 080- 65605850,28495850; email: info@vvi.edu.in.