Shripad Dharmadhikary explains why setting up a tribunal to resolve the Mahanadi Water Dispute will not help the people or the river.
28 March 2018 -

On 12th March 2018, the Government of India announced the setting up of the Mahanadi Water Disputes Tribunal, in response to the request received under section 3 of the Inter-State River Water Disputes Act, 1956 (33 of 1956) from the Government of Odisha to refer the water dispute regarding the inter-state river Mahanadi, and the river valley thereof to a Tribunal.

This is indeed bad news for the river and for its inhabitants.

Water is a state subject in the Constitution, and states are the primary decision makers in terms of the use and management of rivers and other water bodies in their territories. An inter-state river can make this complicated, as interventions by upstream states have impacts on the downstream states. Thus, disputes can arise between states in managing rivers that flow in more than one state. Such disputes are addressed under the Inter-state River Water Disputes Act, 1956.

Briefly put, under this Act, a state that feels that a dispute has arisen with another state with regards to an interstate river can ask the Central government to set up a Tribunal under the Act and refer the dispute to the Tribunal. The award of the tribunal is final and binding, and has the same force as an order or decree of the Supreme Court. Further, the Act specifies, drawing from the provisions of Article 262 (2) of the Constitution that neither the Supreme Court, or any other court shall have or exercise jurisdiction in respect of any water dispute which may be referred to a Tribunal under this Act.

A Tribunal consists of a Chairperson and two members, nominated by the Chief Justice of India from among those who are sitting judges of the Supreme Court or High Court at the time of the nomination. The Tribunal can avail services of technical persons as assessors.

The experience till date of such Tribunals leaves much to be desired. First of all, given its very nature, it is a legalistic process, with a bench consisting of judges, states presenting their cases with the help of high profile lawyers and proceedings invariably taking place in an adversarial manner.

As with much of the legal process in the country, it is highly time consuming. Matters before tribunals tend to go on for years and years. The Narmada Water Disputes Tribunal, constituted in 1969, gave its award in 1979. The Cauvery Water Disputes Tribunal was constituted in 1990, and its award came in 2007. In spite of the bar on jurisdiction of any court including the Supreme Court, matters in front of tribunals have been caught up in much litigation in the Supreme Court. Often, implementation of the final awards of tribunals has also been a problem.

Another dimension of the process being legalistic is that there is no space for participation of anyone apart from the State (governments). In the current understanding of good governance, participation is a key ingredient. However, such tribunals by their very nature have only state governments as parties.

Another widely accepted aspect of good governance is transparency. Yet, because the arguments in tribunals are adversarial in nature, the parties to the proceedings, that is state governments often clamp down on data and information regarding all aspects of water use and management in the basin. This is because of an apprehension that such data will be used by the other parties. This can lead to the public debate and discussion being weakened to a great extent. This is another way in which participation gets curtailed. I had a personal experience when studying the Bhakra Nangal project some years back. The concerned departments in Punjab and Haryana both refused to give any information related to the irrigation and water use from the project citing the ongoing matter before the tribunal.

However, probably the most critical problem when a water dispute goes to a tribunal is that  the dispute or the problem gets framed in the narrowest possible way – in terms of which state gets how much share of the water. Many other problems and other dimensions of conflicts get sidelined or subsumed in this framing, and it serves to divert attention from more fundamental issues. Another issue is that the tribunal is concerned only with the division of water between two states, and not with what is to be done with the water within the respective states. While states do present why they need (more) water, and in the process do indicate where and how they may use the water, the problem is that the award of the tribunal does not bind the states to such distribution of water within its own territory.

This last point is of critical importance in the Mahanadi case, though of course, other problems with the tribunal processes also are relevant to the Mahanadi dispute.

The case of the Mahanadi dispute

There have been many serious water related conflicts in the Mahanadi basin, but they have not been “inter-state”. One of the most important conflicts to have emerged in the recent years has been protests by farmers, initially in Odisha, against diversion of water from irrigation to large industries like thermal power plants, iron and steel factories etc.

On 26 Oct 2006, more than 20,000  farmers came together to form a human chain around the Hirakud reservoir – the largest impoundment on the Mahanadi, near Sambalpur in Odisha – protesting the ongoing and planned massive diversions to industries of the water from Hirakud. The combination of bad maintenance of the irrigation distribution system, large diversions to industries and allowing access to industries of water from much lower depths of the reservoir (which allowed them to draw water on a priority basis during drought years) severely affected the farmers’ access to water, leading to the protests which culminated in the human chain event. The farmers marked a Chasi rekha – farmers’ line – below which they would stop industries from tapping the reservoir water. While the Government of Odisha was forced to form a committee to study water diversions from Hirakud (the Jayseelan Committee) and the pressure of the agitation led to some capping – at least temporarily – of increased diversions from the reservoir, the fundamental issue of tensions over increasing allocations to industry at the cost of farmers remains. 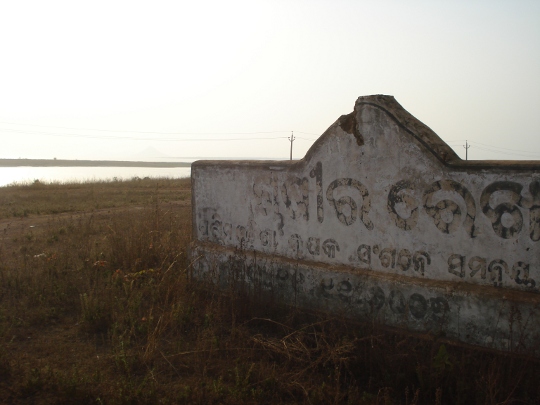 At the same time, similar issues have been coming to fore in Chhattisgarh. Chhattisgarh government has been allocating huge amounts of water to industries, mainly thermal power plants. For this, they are constructing a series of barrages on the Mahanadi. It is these barrages that have been partly targeted by the Government of Odisha when it raised its dispute with Chhattisgarh.

The irony is that whether these barrages hurt the interests of Odisha or not, they are definitely hurting the interests of farmers in Chhattisgarh, as water is being diverted from agriculture to industry. And the barrages themselves are also affecting the farmers as these barrages are destroying the riverbed agriculture growing crops like melons, which is an important livelihood support for mostly landless and marginal farmers. 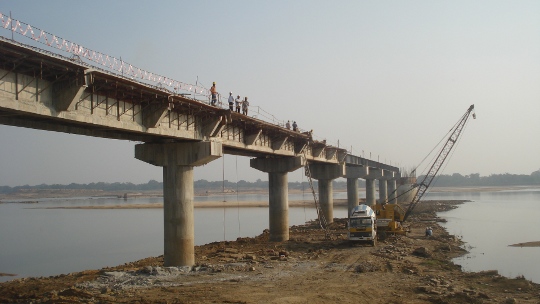 Another emerging problem of utmost serious implications for basin communities in both the states is the issue of pollution and contamination of rivers and water bodies, including of the Mahanadi and its tributaries. One of the main sources of pollution is the large number of industries and mines in the basin. This also creates apprehension in the minds of people when more industries and mines are being proposed.

Given this, it is clear that the conflicts in the Mahanadi basin are primarily between the interests of farmers, especially small and marginal farmers, and industries, and between the polluting industries and mines and local communities, including fishing communities and farmers dependent on the water. 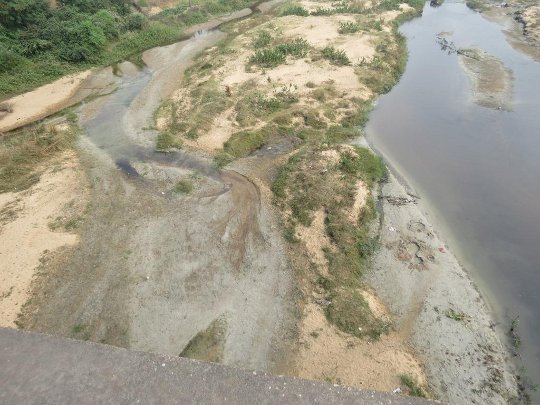 River Ahiran a tributary of Hasdeo, which is a tributary of Mahanadi, polluted with fly ash discharge from the industries. Pic: Shripad Dharmadhikary

Thus, the axis of conflict is not the state but something else. The parties to the dispute are not two states, but famers and industries (the latter often supported by strong vested interests and the state itself).

It is only a few years ago that the government of Odisha started saying that the water use in Chhattisgarh is obstructing the flow to Odisha and the proposed use in the upstream state will be detrimental to the downstream state. It appears that this may have been prompted by the need to divert attention from its failures elsewhere and due to electoral compulsions. This has the effect of reframing the fundamental conflict as a conflict between two states and not between farmers and industries in each of the state. In effect, the conversion of the conflict to an “inter-state” one has the potential to make it a dispute between the industries and elites of Chhattisgarh versus the industries and elites of Odisha.

Response of the Civil Society

In a meeting held in Raipur in August 2016, organised by the Forum for Policy Dialogue on Water Conflicts in India ( I am on the steering committee of the Forum) where the participants included farmers groups, tribal organisations, social and environmental movements, water experts etc. from both the states and from other parts of the country, a statement was issued asserting that “The issue at stake in the Mahanadi basin is not one of Chhattisgarh Vs Odisha; but one of agriculture Vs industry – the people’s organisations of Chhattisgarh and Odisha join hands to oppose the political efforts to divert the attention of the people of both the states from the basic issue.”

As a follow up, groups from both the state have been holding joint programs to emphasise that the issue is not of people of one state versus the people of the other state.

However, the tribunal is now a reality and hence it is important that efforts must be stepped up to ensure that fundamental issues are not side-lined, that there is no politicisation of the issue, and most important, the tribunal process does not result in creating mistrust and acrimony between the people of the two states. This calls for civil society on both sides to be more active and for the basin communities, which have close links across the state boundary, to play a more active role.

It is also important that the process of the tribunal makes a break from the past, and goes beyond the issue of only how much share each state would get, and move to a more modern understanding of managing shared river-basins. This more modern understanding is captured in conventions like UN Convention on the Law of Non-Navigational Uses of International Watercourses, customary law like the Berlin Principles, work of international agencies like the World Commission on Dams, and domestic developments like Government of India’s Draft National Water Framework Law.

As the Raipur declaration quoted above says, “The real issue is not one of Chhattisgarh vs Odisha, but one of protecting the original natural conditions of the river and the environmental flows. The time has come for the state governments and the political parties to make clear policy around water use that prioritise and privilege the water use for domestic needs and for agriculture and also to come up with a river policy.”

It is hoped that the processes in the tribunal and its final award will also move towards this.