In Assam, a unique innovation by a passionate tribal theatre enthusiast succeeds in taking the art from the confines of the auditorium into the lap of nature, creating a near-cosmic experience for the performer as well as the audience. Ratna Bharali Talukdar reports.
14 January 2015 -

Young people generally love to experiment with new ideas and thought. What Sukracharya Rabha, renowned theatre personality of Assam, has been experimenting with at his Badungduppa Kalakendra over the last several years, is not only inspiring, but also truly unique and daring.

Survival of amateur theatre has always been a challenge in Assam, plagued by issues such as lack of patronage, audience and infrastructure. Only those who are passionate enough try to keep it alive.

For Sukracharya Rabha, living in remote Rampur village of Agia in lower Assam’s Goalpara district, theatre is not merely a passion – but a unique journey on the path of submission to nature and tranquillity. His art is celebrated deep inside the forest, in close association with the masses. In the end, drama becomes synonymous with the submission to Creation in a wider perspective.

Under the Sal Tree (Theatre in Nature) began in 2009, when a confused Sukracharya Rabha, still uncertain of the form and technique he should follow to take amateur drama to rural people, met the theatre stalwart of the country, Heisnam Kanhailal, the founder-director of Kalakshetra Manipur. It was Kanhailal who inspired him to take this path, instead of following in the footsteps of the many others who preferred to move to the cities in search of a new identity.

Kanhailal, first conceptualised the idea under a collaborative project titled ‘Nature-Lore’ of Kalakshetra Manipur and Sukracharya Rabha’s Badungduppa founded in 1998. Subsequently, the latter transformed it into a research-oriented theatre festival to explore new possibilities of survival and sustenance of theatre in a pristine rural ambience, and by taking performance into nature itself. 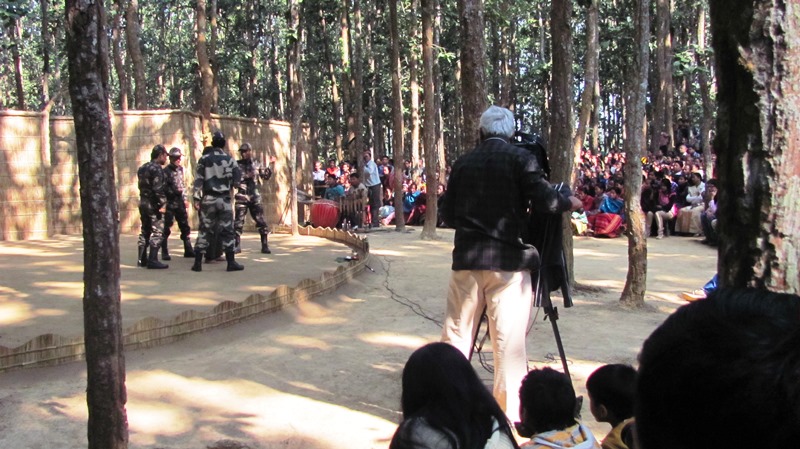 Immediately after the initial kick-start, Sukracharya took upon himself the dual responsibilities of a theatre organiser and director. He was fortunate to get a plot of five bighas (one hectare equals about 6.5 bighas) of land from his father Nilakanta Rabha, who donated it to support his son’s cause. Sukracharya deals with the finances of the entire initiative: from raising funds from different agencies for the annual festival to taking care of his team of co-artists. Simultaneously, he has to think of new experiments to improve the quality of his style of drama and the skills to deliver it.

“Theatre became not a part of my life, but my entire life. I was stubborn in insisting that we must take theatre out of the sophisticated auditorium or stage, and take it to our own people. Forests are always an integral part of the life of the tribes in Assam, and the idea of celebrating drama in the midst of a forest environment took roots in my mind. At the same time, I tried to conceptualise my drama in such a way that it can be performed  both on stage as well as off it, driven by the desire and need to reach wider audience,” recalls Sukracharya, a recipient of the Bismillah Khan Yuba Puraskar from Sangeet Natak Akademi, 2009 for direction and the Aditya Bokra Birla Kala Kira Puruskar, 2010.

Over the past several years, nature-worshipping Sukracharya has been popularising this form of drama among villagers belonging to the Rabha tribe, one of the most colourful plains tribes in Assam, teaching them how to maintain tranquillity while enjoying performances in the lap of nature.

He has taken drama back from the crowds and the sophisticated ambience of the proscenium to the serenity of nature; the performances are enacted in broad day-light under the sunshine that passes through the sieve and the moist odour of the greenish-yellow tender leaves of the Sal tree. There is no illusion of artificial light and no artificial make-up or sound.

As the creator believes in tranquillity, the performances are free from noise and extraneous sounds. He has also been gradually reducing dialogues, prioritising body-language and allowing performers the swiftness of movement. Dialogues form only a small part, and the music too is synchronised in such a way that it is used only when it becomes crucial to break the silence. 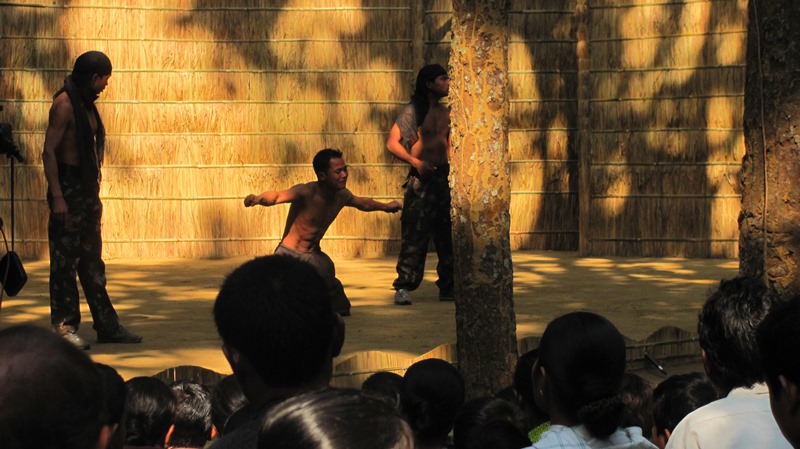 Music is performed live on stage. Most of the musical instruments are the traditional Rabha instruments made of bamboo, earth etc. Often, natural sounds like whistles of wild avian species or that generated in bamboo bushes when winds hit them, form a large part of the music in his drama.

The back drop is created by erecting thatched walls supporting the Sal trees, the gallery for the audience is constructed using locally available bamboo and betel-nut trees without felling down a single Sal tree, and the show is performed in a soothing and grasping silence under the trees.

Today, this distinctive celebration has become a coveted and exciting experience for theatre groups coming from different parts of the country. It is a different experience altogether to perform in front of the massive audience comprised of enlightened rural audience, intellectuals, scholars and renowned theatre personalities – all seated in rows in a panoramic gallery.

Even people who often show no interest in visiting theatre houses in cities eagerly wait for this annual festival designed and developed by Sukracharya, which is celebrated for at least three days with two shows each day.

More than a drama festival

In fact, it is not just a drama festival anymore, but a place for generating and exchanging ideas, for feedback and dialogue.  On every evening during the festival, there are round-table discussions among the participants and audience on issues related to theatre and drama, culminating in a rare bonhomie involving sipping of the traditional rice-beer of the indigenous Rabha tribe by a camp-fire. Workshops for local children also form a part of it.

The celebration includes food and accommodation for groups. This time Sukracharya Rabha has added one more dimension to give it the shape of a true ‘eco- drama-tourism’ festival by providing for accommodation for tourists upon a nominal payment of Rs 1500 per person per night. 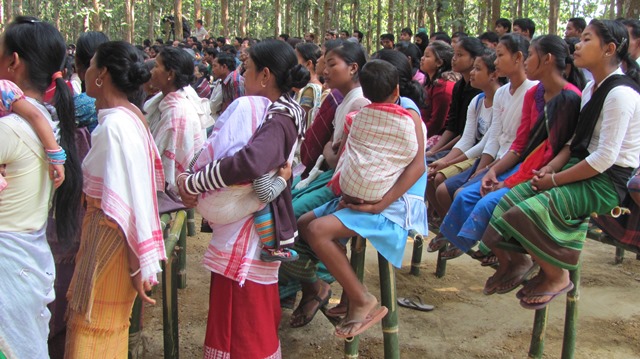 “I have always believed that theatre is not for a particular group of people, and it should not be kept confined to an auditorium.  For me, theatre is life and the entire universe is a part of it.  I simply want to take theatre to the masses, to make them feel that they are part of it.  While writing or directing a drama, I try to get into the skin of both the enlightened as well as the common audience. My aim is to touch the conscience of both these classes of audience through the universal message of the play. I always encourage  my co-artists not to act, but to express their feeling and experiences of life while they perform”, says the protagonist.

Sukracharya has travelled to many countries including the Netherlands, Scotland, Germany, Bangladesh, apart from moving across the length and breadth of India, spreading his message of humanity and brotherhood through theatre.  Badungduppa has so far performed 24 plays in nearly 400 shows. Most of these plays are written in the Rabha language, a language spoken by 1,30,875 people in Assam according to the Language Data for 2001 Census.

Vulnerable to more than the virus
MORE ARTICLES
on similar topics ...
ART