The better education and health outcome indicators in the southern states compared to the north, has been acknowledged for a long time. And yet to see it with ones own eyes really drives home the poin,t say Reetika Khera.
10 September 2012 -

Tamilnadu's achievements in the provision of public services are reasonably well established. Could it be possible that as many people with "voice" remain invested in these public services, be it education or health or the PDS, that has prevented the collapse of these services in TN?

As someone who had not visited rural areas south of Maharashtra in the capacity of a researcher, my first trip to a few villages in Tamilnadu left me wondering if that field visit wasnt a dream. We were looking at the state of public services in rural areas and were pleasantly surprised at the existence and quality of these services  be it government schools, primary health care, or last (but not trivial at all) bus services - compared to what I had observed in the north Indian states.

This comparative qualification is important. If readers in Tamilnadu react to this article by protesting or by bringing to my notice the many failings of the system there, I will not be surprised. In fact, the high standards that they set are an important part of the Tamilnadu story (more on this later).

The better education and health outcome indicators in the southern states (especially Kerala and to some extent Tamilnadu), compared to the north, has been acknowledged for a long time. And yet to see it with ones own eyes really drives home the point. 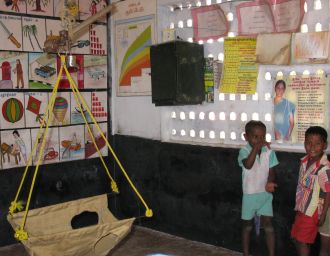 Government schools in rural areas resemble what one imagines schools should look like: a school compound, with a boundary wall, classrooms, an office, a playground; teachers for (almost) each class, teaching activity using text books and blackboards.

Another impressive aspect was the mid-day meal (MDM) programme. The MDM is one programme which has found roots in the north Indian states as well and yet there are several issues with its implementation: the complaints include irregularity, menu not being followed, quality of the food, that it takes away from teaching time since teachers get involved in some aspect of the MDM (e.g., record-keeping). However, it was easy to see that Tamilnadu is still years ahead of many of the north Indian states that are taking this programme seriously: the question of the meal not being served on any particular day does not arise here; children get more nutritious food, including eggs thrice a week (and sprouted chana, we were told, on the other three days); further, the Tamilnadu MDM programme also has a health check-up which includes injections (as one child told us in Maamandur village), measuring of height and weight of children, eye testing and a dental examination.

In Sicko, a film on healthcare, Michael Moore starts by documenting the difficulties of individuals in the US who are at the mercy of private health insurance companies. Then, he visits countries that have a decent public health system based on a strong commitment to free and universal health care. Starting with Canada, he visits the United Kingdom, France and ultimately, Cuba. I felt in December 2009, that the film should have ended in Tamilnadu. 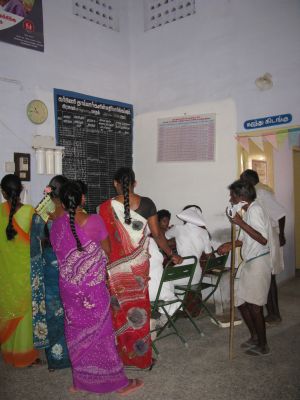 A primary health care centre in Chintalpalli, Dharmapuri district confirms that what I saw in Villupuram was not a dream. Pic: Reetika Khera

The most striking contrast between public services in northern states and in Tamilnadu was the provision of free primary health care (which includes immunisation, ante-natal care, post-natal care, eye care), with a noticeable emphasis on preventive health care. PHCs were well-equipped and functioned well. Amongst the ones we visited was the Iruvelpattu Block PHC (Villupuram district, TN), which provides 24-hour service (each Block, we were told, has one 24-hour PHC). It had a 30-bed hospital, an operation theatre, x-ray machine, a TB unit, an AIDS unit, a pharmacy which provides free medicines to everyone, facilities for blood and urine tests and colour-coded dustbins for segregating medical waste. Not unimportantly, the toilets had running water supply, a bucket and tumbler and soap.

The staff at this PHC was equally impressive: four doctors (including two female doctors) one of whom was a surgeon; five nurses, a lab technician, a pharmacist, two drivers for the two ambulances and other support staff. The staff are highly motivated and are courteous to the patients seeking treatment at the PHC. (When we visited, we were also received courteously, but patients were given priority over us - as they should - in sharp contrast to visits to government offices in northern states, where routine activities sometimes come to a standstill in order to attend to us.)

There is pride and joy in doing their work which was hard to miss amongst other government staff as well (whether its the time-keeper at the bus stand, or the anganwadi helper/worker, or the panchayat clerk or the school teacher). At the Tiruvannainallur PHC (Villupuram district, TN), we met a nurse who had quit her Apollo Hospital job in order to "give back" to the state that had made her education possible.

The functioning of the Public Distribution System (PDS) in Tamilnadu has already been written about. And it provides some insights into why things work there but are in shambles in large parts elsewhere in the country. In 1997, when other states in the country were forced to move to a "targeted" PDS, the Tamilnadu government was forced to reverse its decision within a few days under public pressure (Srinivasan, 2010). As mentioned in the opening paragraph, continuous public pressure has been an important part of Tamilnadu's "success".

Everyone was entitled to subsidised foodgrains from the PDS at Re. 1/kg. (Now it is free.) The PDS is not a source of just foodgrains in TN. Ration shops in TN, we were told, provide seventeen items (including sugar, salt, spices, soap, semolina, edible oil, kerosene). Unlike the north, where the opening of the ration shop remains a bit of an occasion, in TN these shops seem to open at least once a week. It is not uncommon to see people carrying large bags full of groceries from the ration shop.

Whether providing rice at Re. 1/kilo (or free) is required or sustainable is debatable, but there is no doubt that the inclusion (in the PDS) of those with voice has certainly played a role in preventing a collapse of the system in TN.

Similar remarks apply to other government services. We found that gram panchayat officials and elected representatives reside in the village and access the same facilities as the most disadvantaged (including Dalits and other marginalised groups). When the children of the "thalaivar" (panchayat president), the organiser of the MDM, of the panchayat clerk go to the same school as the children of the NREGA labourers (this still happens in some places we visited, though private school enrolment is far from negligible in Tamilnadu), it is in everyones interest to make the schools work.

People werent able to tell us why the monitoring system had not fallen prey to corruption and collusion in TN, to the extent that it had in the north.

•  Bonded and bundled out
•  Malnutrition pushing kids out

The fact that at least some people with voice have remained "loyal" to the government system in Tamilnadu (to some extent), appeared to have a visible impact on the quality of government schools as well. When we asked the panchayat clerk (Villupuram, TN), how it was that teachers were always on time and teaching in government schools, he found it hard to comprehend our question; finally he said that if the teacher were to come an hour late, there would be four parents at the school demanding to know why he/she had come late.

In response to our question as to why things worked in TN, we were often told that there was a strong monitoring system which prevented theft, or slack. However, people werent able to tell us why the monitoring system had not fallen prey to corruption and collusion in TN, to the extent that it had in the north.

Rosy as all this might sound, one should not assume that there is no corruption there: we were told of a lab technician charging Rs. 5 to make an x-ray in the general hospital; the noon meal organizer said that it was possible to pilfer a little from the stocks that come for school children (but not too much); a thalaivar told us very candidly that he had to spend lakhs for his election campaign and equally openly told us that this money was spent on buying votes by distribution of sarees, shirts and drinks.

In a situation where the Panchayat President is not paid any salary, it is not hard to guess how this money is recovered. The real mystery is how, in spite of the existence of corruption, public services in Tamilnadu remain functional in a way that few other Indian states have managed.

Reetika Khera is an economist and activist. This article is based on field visits to Villupuram (Tamilnadu), Dindigul, and Dharmapuri districts in Tamilnadu in 2009-10. The author thanks Jean Drèze for encouragement amd Grace Carswell and Geert De Neve for important feedback. The author also thanks Dipa Sinha and Karuna Muthiah.

The curse of Kala-azar
MORE ARTICLES
on similar topics ...
EDUCATION