When children think abuse is ‘normal’

A new child-led survey has documented the types of violence children in Maharashtra are exposed to. Alka Gadgil reports the important findings from the survey.
01 February 2017 -

“What’s there to report about violence?” remarked a child candidly, while responding to a research investigator who was conducting a group discussion in a small village in Maharashtra as part of a one-of-its-kind survey on child abuse and safety. In fact, for more than half the children who participated in the state-wide opinion poll, Play It Safe, violence turned out to be such a “commonplace, everyday matter” they didn’t think there was anything unusual about being hit or abused.

This and other such startling revelations have emerged from the survey done among 5,000 children across eight districts in the state. The respondents, in the 13-17 years age group, were asked to fill a questionnaire that sought their views and experiences regarding the different forms of violence they may have witnessed or been subjected to, including punishment, humiliation, discrimination and verbal abuse. 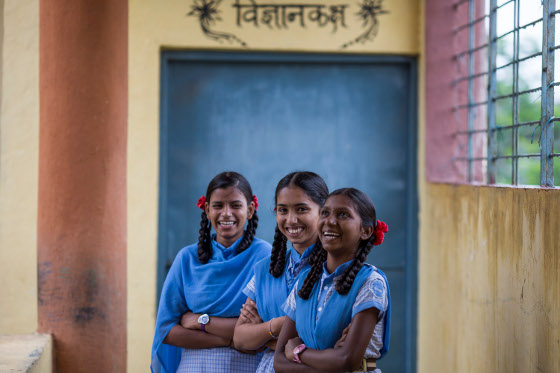 Young girls who shared their experiences of violence in the Play it Safe survey. Pic: UNICEF India.

The idea behind this exhaustive exercise, undertaken by UNICEF Maharashtra, Nine Is Mine and Mumbai Smiles, was to identify and track violence against children in the state and work towards creating safe spaces for them within homes, schools, and their communities by encouraging them to break the silence around abuse. Apart from filling the questionnaire, the youngsters were encouraged to share their feelings through engaging activities like storytelling, drawing and poetry.

The children surveyed reported five forms of violence they are subject to – physical, sexual, psychological, economic abuse and neglect. Significantly, the seemingly sheltered confines of the home has emerged as an arena of violence even as parents were identified as caregivers as well as tormenters. Most kids have reported being hit by or beaten with implements, kicked around, or inflicted with burn wounds.

Unfortunately, such violations are seldom reported and so have the capacity to scar the child irreversibly. Apart from the actual violence itself children have to struggle with the dilemma of whether to share such events with outsiders. It’s a conflict between: “I love my parent… I hate my parent”. The school, the other key safe space, too, comes across as a major letdown. Corporal punishment, standing for hours outside classrooms as well as regular thrashing are portrayed as widespread and frequent occurrences.

Voicing the despair she felt at being denied an opportunity to go to school, a reality that many girls in India live with, Manjushri, a young girl from Marathwada region, says, “When I was in the village, I was totally neglected. I wanted to go to school, but my parents disregarded my pleas. After I continued to insist, I was ultimately enrolled into one, but my parents didn’t provide me with anything… no school uniform, no books… nothing… I am now living in Mumbai and I’m much better off.” Sheelu, a little one from Yavatmal district, reveals, “I feel unsafe at home as there are angry fights between my mother and grandmother.” And Meenal shares, “I feel unsafe at school as there are no bathrooms or toilets.” 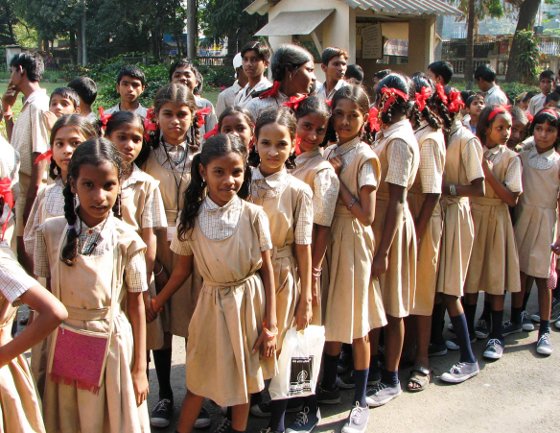 Children face various forms of violence and are vulnerable at home and school. Pic: Bernard Gagnon via Wikimedia Commons

These are far more covert – and common – forms of dangers and violations that post a real threat to children as opposed to the more obvious and gory incidents like rape and murder, which are garner a lot of public and media attention.

In addition to highlighting their vulnerabilities at home and school, the survey also documents the discrimination, neglect and economic violence that children face. There are scores of girls and boys, who not only work at home, in the fields or in small business establishments at the cost of their basic rights. For instance, the survey brings a moving account of a 12 year old boy who can only go to school after filling water, sweeping the house and delivering the tiffin to his family members working in the field. His teacher punishes him and his friends make fun of him for his late-coming. After school he can’t relax, but has to join his parents in the field.

“Marginal land owning families find it difficult to engage labour. Consequently, children have no option but to lend a helping hand to their parents in the farms. Daily wage agricultural labourers are expected to bring their children along to chip in as well. They are frequently asked to be part of agricultural activities such as sowing, tilling and harvesting, besides going to class and assisting in home chores. They work full-time on Saturday, Sunday and holidays. The children told us that corporal punishment is very commonly used to get more work done. They are beaten up if they don’t show up for work,” elaborates Daulat Phoge, a research investigator from Jalna district.

For children from socially backward castes and tribes, as well as those living with disability the violence quotient, whether at home, in the neighbourhood or in school, increases exponentially, informs the survey. These children are usually insulted, shamed and threatened with bodily harm, especially being locked up in a room. Those from marginalised castes or the minority community are segregated and often forced to sit outside classrooms.

According to Sarah Fernandes of Nine is Mine, a child advocacy movement that has supported this survey, Play It Safe is an important study which demystifies many popular notions attached to child abuse and violence. Traditionally, issues around violence against children has either been sexualised or been discussed in the context of a legal framework. With this poll, child safety issues have been demystified, de-intellectualised and de-sexualised. Fights among family members, domestic violence, alcoholism, brawls among children, deserted public spaces, absence of basic infrastructure facilities like toilet and poor lighting in school, among many others, have been identified as unsafe situations and spaces.

“The preparatory phase for the survey – that included seeking permissions from schools and parents – was time consuming. Initially, we pre-tested it in Raigad district. The response from the children was forthcoming and the process became truly interactive. In Nandurbar, students at one of the Kasturba Gandhi Balika Vidhyalayas (KGBVs) were so moved by the discussions around the concerns of the children that many said, ‘No one had thought of or had asked us about our concerns’. Feedback like this kept us going,” explains Fernandes.

Of course, their work wasn’t without its share of adverse reactions. Sister Mary Colaco, a research investigator in Raigad, recalls, “It was far tougher to handle adults, the gatekeepers of the community, than the children. When we were with children, they would linger around; try to pry on our conversations. They would ask, ‘what are you talking to our children about’.” Nonetheless, group discussions and interviews have turned out to be the ideal ways to reach out and connect with the children and, in the process, spread awareness among them on their rights and, importantly, recognising violence. Nirmala, who participated in the survey and discussions in Raigad, says, “I had never considered yells and swears as violence. We are so used to those. However, I now know that verbal abuse, too, is violence against children.”

The passing away of Aradhana Samdhariya, 13, on the heels of a 68-day-fast created major headlines across India. As she undertook the inhuman ritual, her parents and family members made no attempts to stop her particularly when her health began failing. Today, they have been booked for culpable homicide not amounting to murder and for violating the Juvenile Justice Act. Incidents like these point to the fact that the idea that children are the ‘property’ of parents and family, with no independent rights, is actually at the root of horrific violence perpetrated against them.

“The father of the nation practised and preached ahimsa. If only my drunken father could do that, too,” wishes a 14-year-old interviewed for Play it Safe. Reality, awakening, and hope for a childhood free from violence… children finally have their say in this unique survey.

(Names of children have been changed to protect their identity.)