In spite of its gender bias, India has women in leading positions in politics. But this does not herald a new age of gender equality, writes Ramachandra Guha.
09 May 2011 -

This is an extraordinary conjunction, especially when one considers the historic oppression of women in South Asia down the ages. India's major religions, Hinduism and Islam, are in scriptural and practical terms deeply inhospitable to the emancipation of women, to the emergence of individual women as independent actors who can take their own decisions about how to live their life (rather than having these decisions taken for them by fathers, brothers, or husbands). And yet, here we have the policies of the country as a whole, and of several massive states within it, being shaped by women. Hundreds of millions of Indian men are now having their fate and future determined by those whom they have traditionally regarded as being subservient to them.

How does one explain the rise to power and influence of Sonia Gandhi, Mayawati, Sushma Swaraj, Jayalalithaa, and Mamata Banerjee? The cynic may claim that except for the last-named, all have had their paths smoothed by male patrons or family members. Had Sonia Gandhi not been Rajiv Gandhi's widow, she would not have become president of the Congress. Mayawati and Jayalalithaa were the protegées and anointed successors, respectively, of Kanshi Ram and M G Ramachandran, the founders of the political formations these ladies now head: the Bahujan Samaj Party and the All India Anna Dravida Munnetra Kazhagam. Sushma Swaraj was supported in her early years in politics by her husband, the former socialist leader, Swaraj Kaushal, while her recent rise in the Bharatiya Janata Party has been aided by male patrons, most crucially perhaps the Reddy brothers of Karnataka. 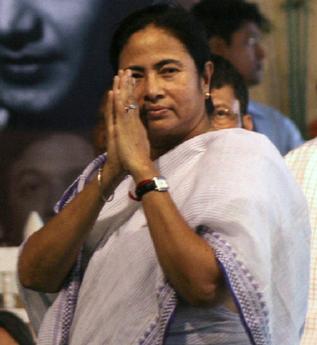 Except for Mamata Banerjee, the others have had their paths smoothed by male patrons or family members. But it can also be said that they are the beneficiaries not of this or that individual, but of a long historical process, led and shaped by several generations of social reformers. (Picture source: TMC web site)

(Mamata Banerjee's career in politics owes much less to male patronage. In fact, she came to prominence through challenging powerful men - first, the anti-Congress stalwart, Jayaprakash Narayan, on whose car she stamped and danced in 1974, and then, the communist stalwart, Somnath Chatterjee, whom she defeated in a Lok Sabha election in the Jadavpur constituency of Calcutta in 1984.)

The scholar may answer (or temper) the cynic by arguing that Sonia, Mayawati and company are the beneficiaries not of this or that individual, but of a long historical process, led and shaped by several generations of social reformers. In the early 19th century, Rammohun Roy responded to the challenge of Christian missionaries by campaigning for the abolition of sati and by arguing that in moral and intellectual terms women were at least the equal of men. In Roy's wake came Ishwar Chandra Vidyasagar, Jyotiba Phule and D K Karve, who championed women's education; Mahatma Gandhi, who brought women into the freedom struggle; and Jawaharlal Nehru and B R Ambedkar, who insisted that women get the vote at the same time as men (in the West, they obtained the vote decades later), and who rewrote personal and family laws to allow most Indian women to own and inherit property and to choose their marriage partners.

Roy excepted, these male reformers were stimulated, challenged, aided and provoked by their female counterparts. The state of Maharashtra in particular produced some brilliant and very influential feminists, among them Pandita Ramabai Ranade and Tarabai Shinde. From the South came such remarkable women as Ammu Swaminadhan, Muthulakshmi Reddy, and Kamaladevi Chattopadhyaya. These feminists helped transform social mores and change state laws, so as to permit the greater participation of women in the economy, in education, in the arts, and in politics.

History and family ties have played their part, but so, too, has the character of these particular individuals. It helped Sonia Gandhi that she was the wife of one prime minister and the daughter-in-law of another, but these connections would have come to naught without her own determination and courage, which saw her bring her party back from the dead to a position of dominance. Both Mayawati and Jayalalithaa have faced, and overcome, vicious and vindictive male opponents. The former has had the additional handicap of being a Dalit in a country still subject to the cultural hegemony of the upper castes, the latter of being a Brahmin in a political climate soaked in anti-Brahminism.

The Hindu Right is nothing if not reactionary and patriarchal, attitudes which Sushma Swaraj has had to negotiate and combat. And in some ways Mamata Banerjee's journey has been the toughest of all, for she has had to fight, in district after district if not para by para, the rule of the wholly male dadas of the long-entrenched Communist Party of India (Marxist).

The success, in political terms, of these five women is manifest. Ironically, though, women continue to be marginal in parties and regions where one might have thought them to have enjoyed more influence. Communists the world over claim to stand for gender equality. Why then is there no significant woman leader of the CPI(M) in either Kerala or West Bengal? Adivasi culture has traditionally allowed women greater freedom; yet one cannot easily think of an important adivasi woman politician. The tribal and Christian communities of the Northeast have traditionally accorded more dignity to women than Hindu or Muslim communities; why then do only men become chief ministers in Nagaland, Manipur, Arunachal Pradesh, Mizoram, and so on? Unlike Hinduism and Islam, Sikhism grants scriptural equality to women; why has only one woman become the chief minister of Punjab, and that for a brief, abbreviated term?

(One must also note that there is not a single Muslim woman leader of consequence anywhere in India. While perhaps easier to explain in sociological terms, this deficiency is nonetheless to be deplored and, if possible, remedied.)

The rise to power of Sonia, Sushma, Mamata, Mayawati and Jayalalithaa has also to be set off against the continuing discrimination against women in Indian society. Female foeticide, dowry deaths, khap panchayats, unwritten rules which militate against women becoming vice-chancellors of major universities and editors of major newspapers - these are the deep and poisonous residues of history, which generations of reformers have been unsuccessful in removing.

Finally, one must note that the five most powerful women in India have not always used their power wisely or well. Sonia Gandhi has promoted a culture of sycophancy that has inhibited Congress regimes from responding effectively to the challenges of governance. Mayawati and Jayalalithaa have pronounced authoritarian tendencies. Mamata Banerjee is, to put it politely, temperamental; her frequent changes of mood, and her lack of interest in policy matters, do not bode well for the government and state she is about to take charge of. Sushma Swaraj's dependence on the mafia dons of Bellary seriously undermines her personal and political credibility.

The rise of Sonia, Sushma, Mamata, Mayawati and Jayalalithaa does not thus herald a 'stree raj', or even a new age of gender equality. Still, that in a society and culture so steeped in discrimination against women these five individuals have come to exercise so much influence is both striking and surprising. Whatever the reasons for their rise - personal (their courage and drive), or historical (the impact of generations of reformers), or political (the advent of universal adult franchise, where a woman's vote equals a man's) - and whatever its consequences, the phenomenon itself is noteworthy, and merits an appreciation, however qualified.