Illegal dumping of industrial waste around Raigarh takes the life of 7-year-old Twinkle Thakur, raising familiar troubling questions about the trajectory of 'development' in India. Kanchi Kohli reports.
12 May 2009 -

"You must be either very dumb or very rich if you fail to notice that development stinks", says Gustavo Esteva, a Mexican activist and development critic. A few days back I happened to read what Gustavo Esteva had to say. His quote was being used in a case study describing the devastation by the petrochemical industry in Nigeria - heralded by the multinational giant Shell - and its impacts on local cultures and lives. I had not even finished reflecting on the case when I received an anguished and angry missive from groups in Raigarh district of Chhatisgarh, about an industrial accident involving children. Esteva, I reminded myself once again, was not just relevant in faraway Mexico, but right here in India too.

The dictionary meaning of the word 'development' often does not match the corrupted reality of its use in India and elsewhere in the world, particularly in economies that are labeled 'developing'. At the same time, in the deeply embedded liberalised economies that one has been living in, the same word is read as a given paradigm, and the human and environment damage accompanying it - as they are in Raigarh - are regarded as necessary side effects.

The death of a child

To return to the letter I received - its contents spoke of one more incident in a by-now-familiar tale of woe over the operations of Jindal Steel and Power Limited (JSPL) around Raigarh town. Ramesh Agrawal of Jan Chetana, an NGO in Raigarh, sent alerts to human rights and environmental groups, drawing attention to a sad but true industrial accident. On the afternoon of 17 April, 7-year-old Twinkle Thakur, daughter of a JSPL employee Sanjay Thakur, and her brother were inadvertently caught in an open live-burning ash dump near a nearby residential area, the Indira Awaas colony. While her brother escaped with burn injuries to his legs, Twinkle died the following day, after being hospitalised first. 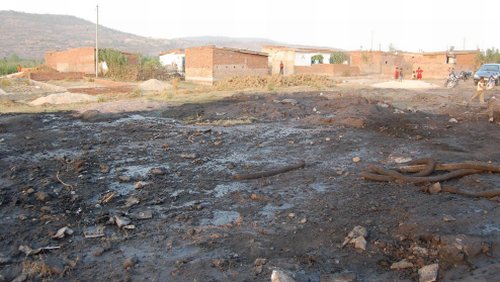 Immediately after the accident, the hot ash was cooled off by JSPL using through water tankers. Jan Chetana says this amounts to destroying evidence at the site of the accident.

Villagers living in the area say the incident took place around 3-4 PM on the 17th. There were delays in informing the police, lodging complaints and booking suspects, but that has become the norm in incidents like this across the country. Twinkle died at 11 AM the following day, whereupon the police registered a case against an unknown JSPL contractor under section 304 A of IPC alleging death due to negligence. However, this was done without a site inspection - or verifying whether a contractor or JSPL itself was responsible for dumping the hot ash in the residential area.

Local activists have reported for many months now that JSPL has allegedly illegally dumped ash around Indira Awaas, which has led to serious accidents involving children. In fact ash dumps can be seen all around the plant site without any protection or regard to safety measures.

Dousing out the memory

Immediately after the accident, the hot ash was cooled off by JSPL, by sprinkling water through water tankers. Industrial operations like JSPL have their own fire brigade. "Soon after the incident, the very next day on 18th all the ash was removed from the accident spot. Tire marks of heavy vehicles could be seen even 4-5 days after the incident." says Agrawal. He argues that this action by the company (either directly or through its contractors) amounts to tampering with the accident site before the investigation is complete, and will come in the way of a just and proper assessment to determine the real culprit. "This is can be understood as a deliberate attempt to destroy evidence of the accident." he says.

A few villagers complained to the District Collector Manish Tyagi, but rather than an immediate and urgent inquiry in response to their complaint, what they have got is legal notices asking them to appear for testimony.

•  A smokescreen of words
•  Inaction against Pepsi

On 29 April, the regional Hindi newspaper Chattisgarh reported on the incident in great detail. The report also included a statement by JSPL's public relations department denying the allegation that the illegal dumping of flyash is by the company. Accordingly to the statement, JSPL has designated dumping sites and methods for operations there. However, several villagers including those from Kirodimal Nagar (close to where the incident occurred), take ash from the JSPL plant for land filling and land leveling purposes. The statement implied that the hot burning ash that took Twinkle Thakur's life was one such instance of the material being moved by villagers to a different location than the one where it was dumped by the company.

Reports from the area indicate that Twinkle's house is locked, and her parents have left for their home town in Bihar. There is little that the local groups can also get out of the hospital administration, who are choosing to be quiet about the incident and the happenings after that. A few villagers complained to the District Collector Manish Tyagi, but rather than an immediate and urgent inquiry in response to their complaint, what they have got is legal notices asking them to appear for testimony. Further, more than fifteen days have passed but not a single senior officer from the district administration has visited site of the accident. Nor has the State Pollution Control Board (there is a regional office of the Chhatisgarh State Environment Conservation Board in Raigarh) taken any action against illegal dumping of hot ash direct from kilns at unguarded open residential place.

What is important to understand, in all this, is that this accident and its aftermath are not simply an isolated instance - not in Raigarh, nor elsewhere in India and definitely not across the 'developing' world. The faces of the villains, victims and audiences are the only things that change. Whistle-blowers find varied degrees of success while seeking justice. But more often than not, the industrial face of such projects is able to quickly put a lid on the whole affair. While the odd mention is made in papers, especially when children like Twinkle die, it is quickly back to business as usual - endless frustration for those who question it, and a nightmare for those whose lives are shattered, but a forgotten past for those who choose not to engage with it.

The verb "develop" is often defined as 'to bring out the capabilities or possibilities of or bring to a more advanced or effective state'. When one stops to ponder how routinely this advanced or effective state has included horrible tragedies visited upon the poor and disenfranchised, it is easy to recognise Gustavo Esteva's criticism for what it is - a plain observation of the truth. Development, packaged in the language of GDP and 'necessary' choices, stinks. And as we debate, define, resurrect, and reclaim our definitions, the world's realities are throwing them back at our faces, until we can evade them no more.

Incidents such as this and the lack of any due action, are of routine occurance in the burgeoning Raigarh district. Industrial development is playing out to its worst, with blatant violations, disregard for life along with fear and corruption as marks of "development". For the last 4-5 years I have been regularly writing in India Together on issues related to rapid industrial expansion in Raigarh district. The most recent article was on the expansion of the Monnet Ispat Plant where in school children were being impacted by pollution of existing operations, and no action was taken despite repeated complaints by the Principal (click here).

To see that JSPL is part of a larger pattern is easy; one has to just land at the Railway Station, breathe the air, and circle around the plant, and the evidence is everywhere.