If all of India's tiger terrain was protected very well, including from cattle grazing conflicts from forest dwellers, it could potentially support 20,000 tigers, say some experts. Malini Shankar has more.
30 September 2009 -

Is it feasible for the Indian forests to support atleast 15,000 to 20000 tigers as is often bandied? Yes, according to atleast two wildlife biologists.

According to Dr Ullas Karanth of the New York-based Wildlife Conservation Society, An adult tiger needs to eat a deer-sized animal atleast once a week which translates to about 50 deer - sized animals a year. For 50 deer sized animals to sustain in a given tigers prey range, at least 500 deer-sized creatures need to survive in the forests. The 10 percent is the tigers fodder. The 10 per cent is also the increase in population of the ungulates that is otherwise downsized sustainably by the tiger. Karanth propounds that 5 tigers in 100 square kilometers can eventually lead to flourishing tiger population in the range of between 15  20000 tigers across the subcontinent. 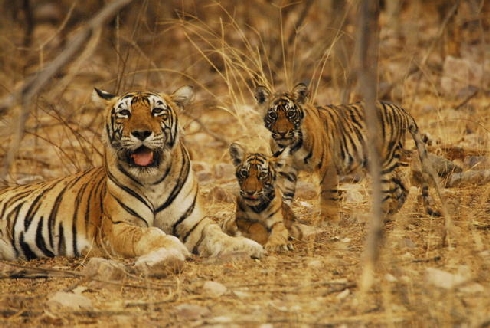 Machali the tigress with her cubs. Tigers breed frequently but their mortality is equally high, which calls for good management of an adult tiger's range - which is 20 - 50 square kilometres for a healthy sustainable prey base. Pic: Rajasthan Forest Department.

In well protected (tiger) reserves like Nagarhole, Corbett, Kanha, etc., we now have tiger densities in the region of 5 to 20 tigers per 100 square kilometers. Assuming if all potential tiger habitat (forests suitable for tigers now in PAs and reserved forests) are protected well and if we assume an average density of 5 tigers per hundred square kilometres is achieved over time, then the existing potential tiger habitat of 300,000 square kilometres could support 15000 tigers, Karanth told India Together.

Karanth is the co-author of a research paper Tigers and their prey: Predicting carnivore densities from prey abundance, published in 2004, on the functional relationship between abundances of large carnivores and their prey under a wide range of ecological conditions. The study attempts to establish the predator prey ratio to establish carnivore densities. The paper was published by the University of Washington, Seattle, and research was conducted by Wildlife Conservation society, and funded by US Geological Survey.

According to the Status of Tigers Co predators and Prey in India 2008  a scientific census conducted by the Wildlife Institute of India, there are an estimated 69,026 Spotted Deer/Chital, 78,861 Sambar, and 25,808 Nilgais or (Blue Bulls) among herbivores spread over 37,761 square kilometres of Protected Areas in Tiger Reserves or about 1,73,695 herbivores spread over the tiger range or PA network (protected Area network)  37761 square kilometres. A total 173695 of herbivores should then be able to sustain around 3600 tigers. However, Dr Y V Jhala, the main author of the wildlife census report explains: This estimate of ungulate spread is actually an estimate of the landmass they are spread out on. No actual sampling of prey base was conducted during that census per se, neither are there any concrete figures of ungulates.

3600 was also number of tigers that was officially stated at the hey-day of the Project Tiger. In line with this, senior officials of the National Tiger Conservation Authority say India cannot possibly support more than 3000 tigers at the most.

Can the numbers ever bounce back?

A latest study  the study of global tiger populations by Ullas Karanth et al published in PLoS Genetics - says over 80,000 tigers were hunted for bounties between 1875 and 1925 across the Indian subcontinent during the colonial yoke. (NTCA officials however are skeptical and dismiss these numbers.)

If the forest cover at the time of Independence were to be restored ideally, Indias forests can in theory support the prey base in a cosmic pattern of Jeevavyvidhyathe and the tiger population that belonged to the realms of folklore.

An adult tiger needs to eat a deer-sized animal atleast once a week which translates to about 50 deer - sized animals a year. For 50 deer-sized animals to sustain in one tigers prey range, at least 500 need to be thriving around the tiger, since 10 per cent is the tiger's fodder.

P R Sinha, the director of the Wildlife Institute of India says, Given the realities of people living in large parts of the Protected Areas, there are only 4 inviolate forest landscapes where the gene pool of the tigers can best be protected for future propogation. These are: the Nagarhole Bandipur Wynad Mudumulai reserves in the Western Ghats in Karnataka  Tamil Nadu  Kerala borders; Kanha  Pench Landscape; the North Eastern Biodiversity Hotspot; and the Eastern Ghats landscape across Nagarjunsagar Tiger Reserve upto the Bhitarkanika Biosphere Reserve abutting Indravati and Simlipal Tiger reserves.

Indias land mass measures 3,287,263 square kilometres in area. A mere 2 per cent or 37,761 sq km is dedicated at present to tiger reserves which ostensibly support 1400 tigers. So, even with an inviolate protection and sanitising all of Indias Protected Areas from all kinds of anthropogenic conflict, India will not be able to sustain the mythical number of tigers that were there in British India at the turn of the last century.

Granted biodiversity is regional and can support an awe inspiring faunal spectrum, but to sustain 20,000 tigers at 50 deer sized animals per annum, we need an area of roughly 5,40,000 square kilometres of PA, in an inviolate state of protection.

The macro picture apart, the micro picture could do with some improvement. There are instances of currently protected landscapes that are hosting less tigers than they should. The Kanha Pench landscape with about 16,000 sq.kms of forests has only about 121 tigers, which is lower than what that size of protected region can support. Jhala takes the case of just 1000 sq.kms: Assuming inviolate PAs of around 1000 sq. km like in Kanha reserve, it can support upto a 100 tigers, (under a specific rate of prey consumption), he says.

The central Indian landscape comprising Kanha Pench, Satpura Melghat Sanjay-Palamau Navegaon-Indravati landscape put together have 47,122 sq.kms distributed in 17 populations. But this entire landscape has no more than 451 tigers (347 to 564). The Kanha-Pench landscape, with 3880 sq.kms, is one of the best managed and best sites for tiger source populations in the sub continent. But, the Kanha TR itself has no more than 89 tigers, and this clearly indicates the under utilisation of tiger landscape by tigers and its prey range.

That means tiger occupancy nor that of its prey range is at its optimum. Given the fact that anthropogenic conflict threatens tiger presence, it is obvious that better management practices (inviolate forest management) can increase tiger numbers significantly.

The rights of grazing for cattle in forests are going to perennially be in conflict with tiger populations, some wildlife experts have been saying for sometime now.

Valmik Thapar of the Ranthambhore Foundation had dissented vociferously in the report Joining the Dots as a Member of the Tiger Task Force which was appointed by the Prime Minister after the slaughter of 22 tigers in 2005 in the premier Sariska Tiger reserve on this premise. The fact is each tiger must eat 50 cow-sized animals a year to survive, and if you put it amidst cows and people, the conflict will be eternal and perennial. Tigers continue to lose out as they did in Sariska (and over 95 per cent of their former range in India). The premise of continued co-existence over vast landscapes where tigers thrive ecologically, as well people thrive economically, is an impractical dream, with which I totally disagree. Thapar did not mince words.

Karanth agrees. If fifty deer sized animals have to be consumed by a healthy adult tiger per year and you insist on the right of grazing cattle in the tiger range habitat man animal conflict is inevitable. Once the tiger preys on cattle, resentful people will certainly poison the castle carcass.

In sum, sacrosanct, sterilised and inviolate forest landscapes in tiger terrain could potentially support tiger numbers in the range of 20,000 and a proportionate prey base. Man-animal conflict has taken a severe toll of tiger numbers in Independent India. To prevent this and perhaps more importantly for the upliftment of people living in the deep desolate ravines of forest reserves, man and beast must be separated, according to wildlife biologists and activists.

Malini Shankar is a Bangalore-based wildlife photojournalist, radio and TV producer. This article is part of a series on tigers. Malini Shankar runs the Weltanschauung Worldview media Centre.

Our Health, Our Initiative
MORE ARTICLES
on similar topics ...
WILDLIFE