Pause before you eat

The Bt gene in brinjal does not increase productivity. But what it is surely about to do is bring India's first genetically altered food crop to your dining table. And there are lots of reasons why this should worry you, writes Devinder Sharma.

After the rats, goats, sheep and cows, it is now the turn of Indians. In a few months from now, if the Genetic Engineering Approval Committee (GEAC) of India has its way, the first genetically modified food crop - Bt Brinjal - will be on your table.

Whether it is the laboratory rats or the higher mammals, the animals have been more discerning. Probably they have the sixth instinct, that the humans sadly appear to lack. There is otherwise no explanation why the laboratory rats should be spurning GM food that we are told is perfectly safe for us. And when force fed, the rats have invariably developed tumours, develop deformed body organs, including kidneys and livers, and these have led to several serious diseases and ailments.

We have heard repeatedly of the death of sheep and goats, when left to graze in the Bt cotton fields. First it was reported from Andhra Pradesh and now newspaper reports say the same is happening in Orissa. Not much is known publicly about how cattle react; several farmers in Rajasthan, Madhya Pradesh and Haryana have told me that cows avoid the Bt cotton fields when left to openly graze.

The Bt gene that has been infused in Bt cotton (or Bt corn on which most of the laboratory rats studies have been conducted) is no different from the one drawn from a soil bacterium - scientifically called Bt - that is now being incorporated in Brinjal. This gene releases a toxin within the plant that kills fruit-and-shoot borer insects. The Maharashtra Hybrid Seed Company (Mahyco), which is spearheading research on Bt Brinjal, claims that the genetically-modified Brinjal is safe for human consumption. 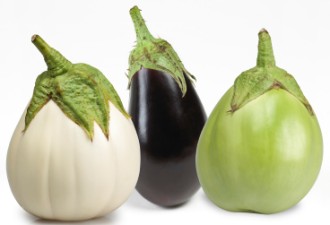 So far you have been made to believe that by proper washing of the Brinjal veggies you could get rid of the harmful pesticide residues. That may not hold true anymore.

•  What's that on your plate?
•  From potato to pomato

I have never been overawed by the safety claims made by companies. For several decades now, we were told that cigarette smoking wasn't harmful to human health, chemical pesticides were completely safe, and white sugar poses no danger to the human body. These are not the only products that received safety certificates, either. The list is endless. And yet, decades later, and after inflicting a heavy human cost the world over, most of these products are being banned or phased out. The way sugar-based food products have hit the market - and all are vouched safe - diabetes has suddenly assumed epidemic proportions.

Talking about diabetes, and realising that the disease is growing at an alarming scale, the disappearance of the traditionally cultivated Brinjal from the market, will surely take away one of the simple home remedies and widely practiced dietary solutions to combat Type 2 diabetes. I too suffer from this variety, and therefore find it appalling to see that no scientific organisation, including the GEAC, is coming clean on what the genetically modified Brinjal will mean to people like me.

What about diabetic mothers? Pregnant women are increasingly becoming prone to gestational diabetes - a temporary form of diabetes. In recent years, the number of affected women in whom the disease has grown to full-blown diabetes has been increasing - almost 25 per cent get Type 2 diabetes within 15 years. Whatever be the safety claims, the fact remains that no medical studies have been conducted to show that the therapeutic properties in a normal Brinjal will not change when it is genetically modified.

Even if you are not a diabetic, you can't be sure you're safe. So far you have been made to believe that by proper washing of the Brinjal veggies you could get rid of the harmful pesticide residues. That may not hold true anymore. With genetic modification, the toxins are no longer only on the surface of the foods; instead they are inside. And you will not be able to wash away these toxins once the Bt Brinjal arrives in your kitchen.

Don't just take my word for it. Listen instead to Professor Dave Schubert of the Salk Institute for Biological Studies in California: "The Bt toxin is 1000 times more concentrated than in Bt sprays, which do not themselves have a history of safe use." In simple words, what Dr Schubert says is that genetically modified Bt plants, and that includes Bt Brinjal, carry a toxin that is a thousand times more potent than what is used to kill insects. Strains of Bt have been used as sprays to control harmful insets.

The problem is that once Bt Brinjal enters the market, there is no way you can distinguish it from the normal ones. Your vegetable vendor will never be able to sell you the normal Brinjal that you are so used to buying. Moreover, once the genie is out, there is no way to call it back into the bottle. To make matters worse, the GEAC has given permission to conduct multi-location trials on Karnataka's famed traditional Brinjal varieties - Udupi Gulla. Cultivated for its special taste and unique flavour in the Udupi district of Karnataka, these strains are tied to such strong socio-cultural traditions that even today the Gulla Brinjal variety is offered to Lord Krishna on festive paryaya ceremonies.

Tracing out the antiquity of the cultivation and use of Brinjal in India, Ramesh Bhat of the Centre for Science, Society and Culture, Hyderabad, writes in a detailed paper in the journal Asian Agri-History that Gulla varieties (especially Mattu Gulla) are a perfect example of 'plant-God-science' relationship. "The example of Mattu Gulla shows how local farmers can choose a variety that meets their local needs and preferences, and is best suited to their specific local ecosystems. The practices adopted by farmers of Udupi have a scientific basis - both traditional and modern."

Realising the uniqueness of the Mattu Gulla Brinjal, the Karnataka State Department of Horticulture is trying to preserve the genetic wealth by seeking a geographical indication for the Gulla strains. Ironically, the same variety for which GI is being sought by the Karnataka government is now ready for genetic plunder. The GVK University of Agricultural Science and Technology, Bangalore, is trying to introduce a Bt gene into the Gulla strains, thereby contaminating the genetic make-up of the traditional variety. The uniqueness of the Gulla varieties, preserved for over four thousand years by local farmers, awaits erosion at the hands of agricultural biotechnologists.

Why worry about this Bt Brinjal, some might ask. Isn't it necessary for improving production and productivity, some of you might argue. First of all, let me assure you that there is no shortage of Brinjal. Nor does the Bt gene increase productivity and production; there aren't puiblicly available studies to check the claims of the companies, anyway. But what it does for sure is bring India's first genetically altered food crop to your dining table. It is time you woke up before it is too late.

Devinder Sharma
19 September 2008
Devinder Sharma is a food and trade policy analyst. He also chairs the New Delhi-based Forum for Biotechnology & Food Security. Among his recent works include two books GATT to WTO: Seeds of Despair and In the Famine Trap.
HomeTop